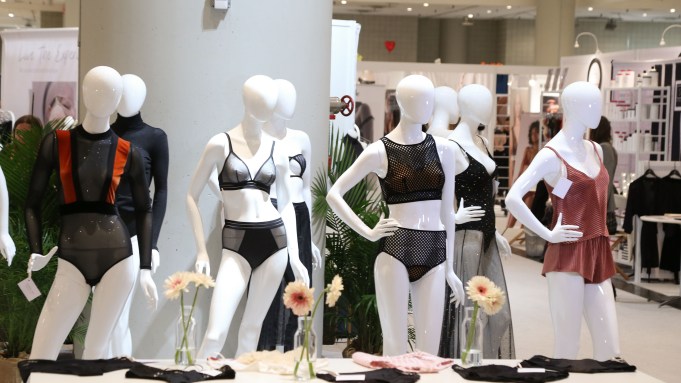 NEW YORK — The CurveNY trade show, which took place at the Jacob K. Javits Convention Center last week in New York, had a brand new location. As opposed to being at the far end of the venue, it was connected to Coterie, which was a welcome change for intimate apparel buyers and retailers who are attempting broaden their customer base by aligning more with ready-to-wear and offering fashion pieces.

Paul Stuart made its CurveNY debut with a line of made-to-order women’s robes that retail for $595. The company introduced these robes shortly after Paulette Garafalo joined as chief executive officer in the middle of 2016. The CurveNY show was their first attempt to wholesale the line, which the company said has been well received — they picked up three new stockists.

Ginia, a 40-year-old Australian sleepwear brand that started selling in the U.S. a year or so ago, is known for its silk pieces that blur the line between nightwear and ready-to-wear, but in order to appeal to more customers, they’ve introduced a silk cotton blend set of pajamas that retail for $255 — its silk sets are around $300. The brand, which is sold at retailers including Saks Fifth Avenue and Bloomingdale’s, also introduced a double-breasted pajama top that ties at the waist and is priced for $340, and a slip with a contrasting neckline that is priced at $188.

In an attempt to target more specialty stores, Sleepy Jones showed at CurveNY for the first time. The sets, which are packaged together, sold well. The brand also previewed a collaboration collection with the David Lynch Foundation.

Flora Backer, founder of Flora Nikrooz who left the brand and launched her collection, Rya, is getting back to her bridal roots but making pieces for the modern bride who wears black on her wedding night and opts for champagne instead of white or ivory. Backer showed sheer capes, robes accentuated with diamonds and feathers, matching sets with tap shorts, matching crochet sets and sexy loungewear. The line retails from $90 to $140.

“These are pieces that she can take out of the bedroom and don’t only have to be for her wedding night,” Backer said. “Why can’t it be ready-to-wear? She can wear it over a bathing suit or put it over a black dress at night.”

For the bra category, innovation, comfort and fashion was important.

According to Jessica Pfister, vice president of Le Mystere, for fall the brand is appealing comfort and selling to the senses.

“We want to encourage customers to touch the product, which will then prompt them to try it on,” Pfister said.

Le Mystere is launching a Perfection collection for fall that includes a T-shirt bra with memory foam cups and uplift that’s customized for each cup size and retails for $68, along with a lace perfection smoother bra that’s made from a flat jacquared lace and retails for $65. Le Mystere is expanding colorways on its core styles like the Safari bra that will come in a graphite color and a fawn colorway, that’s a mix between cocoa and purple. Pfister says strapless styles have had double-digit growth numbers, and the customer is still looking for wireless bras, but with a high-end aesthetic. To cater to more customers, Le Mystere has expanded to a G cup and has plans to introduce new styles in an H cup.

Curvy Couture is following a new strategy this year by leading with the most popular silhouettes from its collection and releasing them in new colors each month with a coordinating panty. According to Dora Lau, founder of Curvy Couture, the conversion rate is higher when the brand offers coordinating sets. For fall, they are releasing the Diamond Net collection, which includes a lined, underwire bra covered in a sheer mesh and the Lace Dream Lift bra that features eyelash lace and convertible straps — they both retail around $60. Curvy Couture is also exploring new skin tone shades — the Tulip bra now comes in a mocha color — and expanding band and cup size to 46H.

Elila, a plus-size intimates brand, has added a new buckle to its bras that operates like a TRX strap and can hold the weight of breasts without the straps moving throughout the day. It retails for $75. They’ve also launched a balconette bra and are starting to consider A cups for larger bands.

Panache’s plus-size line, Sculptresse, which was launched four years ago, collection has been doing well in the market. It is based off of Panache’s silhouettes but with expanded sizing. Chi Chi, a balconette bra, will come in a fashion color and a floral print, and Siren, a plunge style, will come in a baby pink colorway. For Panache, the Andora, a wireless style, is selling well, as are high-waisted briefs.

Parfait, an extended size intimate apparel brand that’s sold at retailers including Lord & Taylor and Nordstrom, is also leaning into fashion. They’ve just introduced Mood by Parfait, which is a trend-first collection with a price point that ranges from $38 to $42 that’s a little bit less than its core brand. They showed the Allure bodysuit with wireless padded cups, the Decco wireless bra with criss crossing details for lift, and the Armour style that features a plunge silhouette and a wrap-around, criss-cross design. And to promote inclusion, Parfait has created a #PerfectFigure 2018 calendar that features women of varying shapes, sizes and nationalities.

Helena Stuart, who owns Only Hearts, said business has been challenging and she’s in the midst of testing different trade show venues, including Capsule, to see what works best for her brand and store. She said the prices of silk have increased tremendously, which has impacted production. She was on the lookout for more slippers, which have been doing well in-store.

Katie McGinn, who recently opened up Darlin’, an intimate apparel store in Nashville, was looking for extended sizes, body suits and other items customers could wear outside of the bedroom as well. She noticed a lot of nude, pink and blush colorways and richer tones like navy and burgundy for fall.

Rachel Stiger, who opened up Maison Blue, an intimate apparel store in Oklahoma, said customers are looking for wireless bras that still offer support that are versatile.