Multifunctional innerwear was the prevailing trend at the Curve New York trade show. 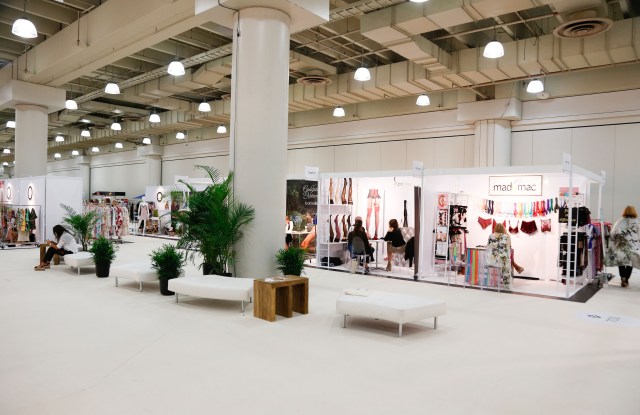 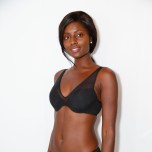 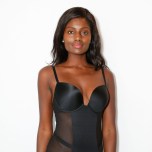 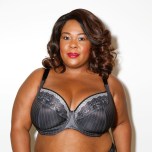 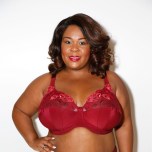 NEW YORK — As innerwear begins to function as apparel — click through any music festival gallery for proof — brands showing at the Curve New York trade show, which took place at the Jacob K. Javits Convention Center this week in New York, continue to think about functionality, duality and Instagram appeal when developing their collections.

“We are seeing a shift with lingerie. It’s becoming the main focal point,” said Jessica Pfister, vice president of Le Mystère. “Girls are wearing bodysuits with pants; bra tops with jackets. The expectation is comfort and quality.”

“When I started out, everyone was a 34B. Now at minimum everyone is a D. Women are becoming more educated about the fit of bras,” said Pfister.

For spring, Curvy Couture is attempting to provide this customer with everything she needs by expanding on its core assortment, primarily its Tulip bra, a lace balconette style, with more color options, and launching a bridal line, which Russell said outfits a woman for her honeymoon, bachelorette party and wedding. The brand is also introducing more unlined, sheer styles with its Glistening collection that retails for $62, and a sheer scoop-neck bra that’s priced around $60, and a crochet lace bralette with a halter neckline and soft underwire that’s $58.

Elila, a plus-size intimates brand, is embracing the diversification of nude in the industry by introducing a mocha shade.

“We produce 4,500 stockkeeping units and now 560 of them are mocha. We’ve made a real commitment, said Elila owner Ellen Jacobson, who was pondering the introduction of a chocolate color for the next collection.

Commando also has its sights set on the innerwear-as-outerwear category, and outfit foundations. Commando showed sleeveless leather and velvet bodysuits, which were attached to a seamless snap closure panty, and long-sleeve lace and net versions that retail for $98. Leggings were another focus, including faux leather styles. Shapewear seemed to be less important for the brand, but it did present a new one-piece bodysuit style with shorts.

According to Kelly Hines, a buyer at Bare Necessities, everyday, soft shapewear is trending down and women are focusing on firm shapewear — think corsets — for special occasions.

Alyssa Barnard, another Bare Necessities buyer, said because of Gigi and Bella Hadid and Kylie and Kendall Jenner, trends within intimate apparel are changing faster and shoppers are quickly adopting them. Barnard said right now, their customer is looking for faux-leather leggings, fishnet hosiery and ankle socks.

Flora Backer, the founder of Flora Nikrooz who left the brand and launched her new collection, Rya, focused on multifunctional pieces as well, primarily ones that could be worn beyond the bedroom.

“We have to get the customer back in,” said Nikrooz, who showed embroidered robes, tap shorts and matching bralettes decorated with rosettes and chemises. “It’s important to be colorful, to be detail-oriented and highlight the duality of the garment.”

Nursing bras were trending at the show, with brands such as Hot Milk, Cache Coeur and Silent Arrow offering more fashion-forward styles.

“A couple of years ago, Forever 21 and Topshop were focusing on maternity segment, and that brought some attention to the category,” said Ange Sloan, director at Hotmilk, which is based in New Zealand and has been around for 12 years.

Cindy Kahng, the owner of Azaelas, a New York-based lingerie and swim boutique, was looking for bras with fuller cups and smaller bands. Rebecca Lee, a buyer for the boutique, noticed more orange, mint and dirty pastels. While Kahng said she wasn’t wowed overall by any of the product at the show, she did like Fortnight and Beija London.

Beija London, which is run by sisters Abbie Miranda and Mazie Gardner, who grew up in the lingerie manufacturing business, have created a sizing system to accommodate varying levels of support. The X category features bralette styles sized in small, medium and large. The Y category is for underwear styles that accommodate a B to D cup, and category Z is for DD to G cups. Each collection uses the same fabrics and colors. The bras retail from $90 to $100 and the underwear are priced from $30 to $40. They come in navy, orange, mint, white and black color palette.

Helena Stuart, the owner of Only Hearts, said she’s made a conscientious effort to not produce anything in black under her own line, or purchase anything black for her chain of intimate apparel stores.

She instead has played with Millennial pink, showing sleep, lounge and lingerie in varying shades of the hue and mixing basics including camisoles and T-shirts with matching underwear.

According to Aydee Garcia, who manages and buys for the Mott Street Only Hearts store, the CouCou bodysuit, reproduced in periwinkle for spring, is a bestseller at the store. Stuart said customers are also gravitating toward interesting prints as opposed to traditional ones. A pajama set called tropical lovers, which featured illustrations of companions, sold well so Only Hearts introduced a night lovers pajama set.

Detailed prints were also important for Derek Rose, which previewed a hand-painted design on silk women’s pajamas that were derived from a picture Rose took in India. The firm recently launched a men’s resort line of swim shorts with mesh-lined pockets, linen tops and pique polo shirts.