Hollywood Legs: It’s All About Legwork

By Karyn Monget and Marcy Medina on February 21, 2012
View Slideshow 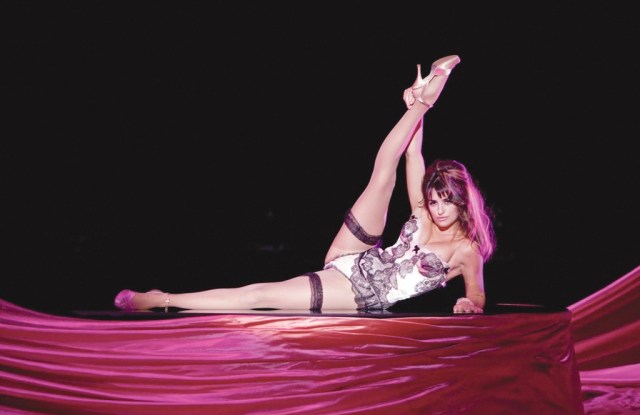 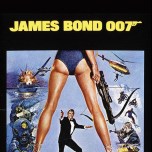 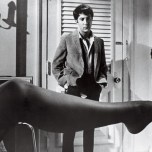 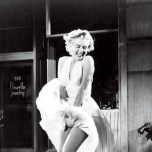 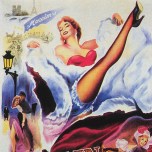 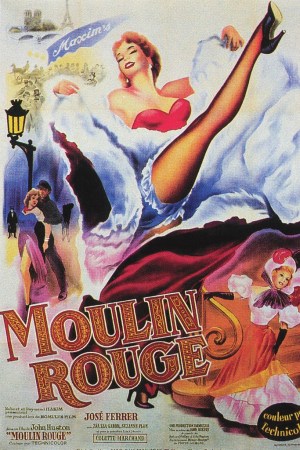 Playing up the legs in “Moulin Rouge.” 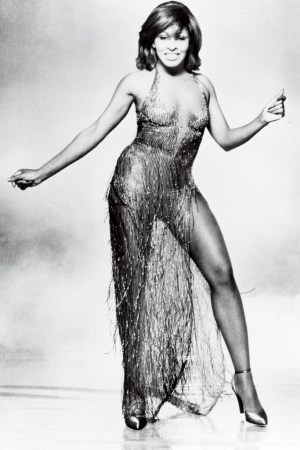 The Comeback Continues at Victoria’s Secret

You need talent, looks and style to make it in Hollywood — and great gams don’t hurt, either. From vintage musicals with icons like Ginger Rogers or Ann Miller to a modern-day homage to burlesque in “Nine” with Penélope Cruz, Marion Cotillard, Kate Hudson and Fergie, a comedy like “The Seven Year Itch” featuring Marilyn Monroe, a classic like “The Graduate” with Anne Bancroft or the electrifying on-stage presence of Tina Turner — there’s one prerequisite: killer legs.

• Phillip Bloch has dressed celebs from Sandra Bullock and Salma Hayek to Nicole Kidman and Halle Berry, whom he has wardrobed for The Golden Globes, The Emmys, the Screen Actor’s Guild Awards and the Oscars. He believes a gown with a high-cut slit that reveals a hint of leg is the sexiest look on the red carpet.

“I love slits. It’s a great way to show off legs and you don’t have to have great legs to look sexy,” said Bloch. “There’s a return to old-fashioned Hollywood glamour and it feels like Juliet Prowse or Ginger Rogers all over again. I’m seeing a lot of slits on the red carpet, like the [Versace] gown with thigh-high slit that Lea Michele wore to the SAG Awards. I also love the look of an evening gown with a high-cut slit because it’s not too brazen… It leaves a little bit to the imagination, not like the short skirts and HotPants everybody’s wearing.”

Favorite legs on screen: Anne Bancroft in “The Graduate,” Julia Roberts in “Pretty Woman” and Raquel Welch in “One Million Years B.C.”

• Soyon An, costume designer for “American Idol” and “So You Think You Can Dance,” said a monochromatic leg and shoe creates “great gams.”

“One of the things I love to do to elongate the look of the leg is to use a tone-on-tone look like nude tights paired with nude-tone shoes. Another trick is wearing back-seam hosiery that looks like it runs down a stiletto heel for a really long leg.”

As for the biggest sins, she added, “Women shouldn’t wear shoes that cut them off at the ankle. If the shoe strap runs across the ankle, it’s a no-no. But it’s totally OK if it’s a V-shape or asymmetrical strap because it shapes the ankle and looks sexy.

“Some girls don’t have to worry about their legs, like Katy Perry and Carrie Underwood, who have amazing legs.”

Favorite legs on screen: “‘Nine’ comes to mind when I think of great legs and movies,” said An.

• Cristina Ehrlich, whose clients include Amy Adams and Penélope Cruz, said, “I personally love — for myself and my clients — black opaque tights….They are a necessary winter wardrobe staple and help create the perfect Parisian-inspired ensemble. I particularly love Falke hosiery….If you really want to get creative, the color options from Falke are endless.”

Legwear, she said, is a great way to introduce interest into the wardrobe with color and texture.

“High heels are key. The elongating effect of a heel impacts the length and proportion of the entire body,” she added. “Skirt length is important when considering what flatters the leg most. I think age demographic should also be considered. It’s always a good idea to adjust the length of the skirt to make sure the best part of your leg is featured, and you create the illusion of length in the leg.”

She added that she uses Clarins Leg Emulsion to give legs a healthy sheen.

Favorite legs on screen: “The first time Daniel Day Lewis sees Juliette Binoche in ‘The Unbearable Lightness of Being.’ It’s the scene where she dives into the pool in a black swimsuit and we see an image of her legs underwater.”

• Randall Christensen, costume designer for “Dancing with the Stars,” called legwear the number-one priority for celebs to look sexy on the hit TV series.

“Dancing tones everything from the ankles to wonderful calves, thighs and a firm derriere. So, cha-cha your way to sexy legs. Also get some color onto your legs with self-bronzers, a safe way to tan up the legs and draw attention to the shapes and curves.

“One thing that is so fun and a bit playful is to accent an ankle with a bit of body art like Swarovski press-on tattoos. They are fun, playful and most of all, removable. But keep away from ankle bracelets. Being a former dancer, it’s all about elongating those legs, so don’t break the line by having a clunky ankle bracelet.”

Favorite legs on screen: “Any movie with Cyd Charisse. She did a phenomenal job of showcasing the most beautiful legs in the industry in ‘Singin’ in the Rain,’ ‘The Bandwagon’ and ‘Silk Stockings.’ Marilyn Monroe in ‘Gentlemen Prefer Blondes’ would definitely be next in line. That opening number with Marilyn and Jane Russell, in the red sequin gowns, cut up to there — Wow.”

“Boots balance out the hips and make you feel powerful. A shoe you can rule in, that lets you walk beautifully, is always gonna make for an overall sexier silhouette in motion. I have very pretty shoes that are so unbearable that they have been relegated to home decor at this point.

“Pilates works wonders for leg confidence. I like how pilates elongates the leg muscles like a dancer’s….Designing for the LXD has put me in full service to the lines of the leg. A dancer’s top priority is often showing off their leg articulation. When the look doesn’t call for double-layered Capezios, I use metallic skinny jeans like Kill City’s Junkie Silver coated stretch denim or American Apparel’s disco pants, which have both awesome compression and reflective highlights that create sexy 3-D legs.”

Favorite legs on screen: “I have the poster of Brian De Palma’s “Dressed to Kill” in my entry way, featuring a Graduate-like shot of black stockings. It inspires me to ask myself each time I leave the house — are you dressed to kill?

“My favorite scene in the recent ‘Mildred Pierce’ redux miniseries (designed by the legendary Ann Roth) was when Guy Pearce slips up Kate Winslet’s skirt to reveal her much-discussed ‘working woman’s legs’ in nude stockings and a girdle with garters…He is kissing and worshiping her calves, which really reveals the eroticization of the legs during that period…It used to be all about ‘nice gams.’ I’m glad we are moving away from T&A and getting back into an emphasis on legs. There’s also the scene in ‘The Piano’ when Harvey Keitel finds a tiny hole in the calf of Holly Hunter’s woolen stockings and it’s the first time he touches her skin. I love how in historical drama, the sex appeal is in the discovery of the body beneath the garments, rather than the flesh parade we are used to these days.”

• Jill Ohanneson, costume designer for the ABC-TV series “Revenge,” said, “I love sheers on any legs in heels, as they give an elegant hint of color without the heaviness of an opaque tight. But those same opaque tights look amazing with flats and boots.

“Shimmery tights, like shiny fabrics, do weird things on camera — unlike real life — so I tend to stay away from them. And nothing is sexier than a great pair of fishnets with the right outfit.

“I do love Wolford stockings as they are so well made and hug the leg beautifully. And Donna Karan has always done a great job combining hosiery and shapewear together and has a really large selection of colors, textures and patterns. Hue also has really fun patterns and colors. The most flattering shoe on any leg is a high-heeled pump or sling-back, which elongates the leg. Ankle traps and Mary Janes are harder to wear as the strap line can accentuate thick ankles and calves.”

Favorite legs on screen: Claudette Colbert’s revealing leg scene in “It Happened One Night.” She noted, however, “I think my favorites have got to be the musicals ‘Chicago,’ ‘Moulin Rouge’ and ‘Burlesque,’ because when you’re dancing it’s all about the legs. Also all those wonderful Esther Williams movies with beautiful girls in sexy vintage swimsuits. And I think ‘Sex And The City’ did a really good job of making sure that the shoes, and therefore the girls’ legs, looked great.”

• George Kotsiopoulos, stylist and host of E’s “Fashion Police,” said fishnets are his legwear of choice.

“I love fishnets because they make even unshapely legs look shapely. A nude fishnet is a great way of doing a bare-leg look without really having a bare leg. Some women think black is too severe, so tan, gray or brown tones it down. And I love the idea of matching sheer hosiery with the same color dress. More people should do it.

“Even though a bare leg looks nice, I can’t understand how women can go around with bare legs,” he added. “If you’re doing an ankle strap or bootie, an opaque tight in the same color really lengthens the leg. And I like tights with sandals, it’s fun. Any heel with a really low vamp is going to lengthen the leg. With a longer skirt, I like ankle-strap shoes. If you don’t have shapely ankles, a strap helps to create the illusion of one.”

Favorite legs on screen: Liza Minnelli in “Cabaret,” Ann-Margret in “Kitten With a Whip,” Shirley MacLaine in “Irma la Douce” and Sharon Stone in “Basic Instinct.”

“There’s also the scene in ‘Working Girl’ where Melanie Griffith is at the bar and Harrison Ford first sees her. Her stockings have back seams and little crystals. The clothes she wore when she transformed [from a secretary to executive] are so timeless and beautiful — and her legs are fantastic.”

• Lindsay Albanese, whose clients include Kristin Cavallari and Maria Menounos, is a fan of sheer black hosiery.

“Supersheer black hosiery is perfect for a bit of coverage while still showing off the legs in chilly climates. I also have hundreds of black opaque tights. When in doubt, they always do the trick for style and warmth.

“Any hosiery with a vertical print or design is key to avoid making the legs look bigger than they are. Anything with a sky-high heel elongates the leg. Simple peep- or round-toe shoe styles will always be the best bet because they show off the foot and are a simple silhouette. Nude heels also create the illusion of a longer leg.

“I also love Jergens self tanning lotion and I use NARS bronzing oil, but it’s expensive. So, I found a product at Victoria’s Secret that does that same thing for a fraction of the cost.”

“I just styled Jennifer Aspen of ABC’s upcoming ‘Good Christian Belles’ for New York Fashion Week in a lot of tights, and I just sent Melissa Rauch of ‘The Big Bang Theory’ nude tights to wear on the Craig Ferguson show. I think a nude pump makes the leg look longer….I love Brian Atwood and Louboutin pumps for a longer leg. And a pencil skirt is great for a long leg as well as a slim-leg pant.”

Favorite legs on screen: The cancan girls in “Moulin Rouge” and Marilyn Monroe in “How to Marry a Millionaire.”