Millard "Mickey" Drexler is no yogi. He's never even taken a yoga class. 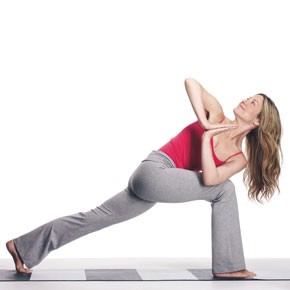 Millard “Mickey” Drexler is no yogi. He’s never even taken a yoga class.

“It’s been on my agenda for 10 or 15 years,” said the J. Crew Group chairman and chief executive.

But for those who do partake of the lifestyle, J. Crew has launched a yoga collection on jcrew.com, and at the J. Crew store in Manhattan’s Rockefeller Center. The collection will be in the fall catalogues, and yoga shops inside other J. Crew stores are being considered, including the unit on the Third Street Promenade in Santa Monica, Calif.

Like the discipline itself, J. Crew yoga exhibits ease and simplicity. The line was introduced with just five pieces and a yoga mat and, as Drexler said, “the right balance of cotton and spandex.” Most yoga lines, he noted, use a poly-spandex blend.

The items are mostly solid, in classic white, navy, gray and black. There are some items in punchier colors, like rhubarb and sour lemon. Fall’s color palette will be different.

Asked how much volume the collection could generate, he replied, “We don’t know, and it doesn’t matter if it’s big or not. It’s a business that’s important to our customers. We selected yoga because it really fits very much into what we thought we could do well and what will differentiate us in the market.”

Yoga instructor Elizabeth Rossa is the face of J. Crew yoga. She’s seen on jcrew.com wearing the collection and striking yoga positions. Rossa, who owns the Shri Yoga Center in the TriBeCa section of Manhattan, is one of a few yoga experts who have been designated J. Crew “ambassadors.” Rossa; Stephanie Cullen, yoga director at Equinox in New York, and Suzy Nece, the yoga director at Equinox in Los Angeles, wear the collection on the job.

The yoga cami, priced at $38, comes in lightweight, breathable nylon-spandex, and has straps, a scoop neck and a built-in shelf bra.

The jacket, priced at $69.50, is fitted, has a zip front, a chin-protecting “zipper garage,” three-quarter length sleeves, rib trim at the cuffs and hem, slit pockets, and an inside pocket for an MP3 player.

The pants, priced $65, have a fold-over waist covering the drawstring for a smooth finish that doesn’t impede the workout. Other products include leggings, priced $55; headbands, $14.50; a yoga bag, $70, and the mat, $35.

For fall, J. Crew will introduce three new camis, one new long pants, another crop pants and new leggings, among other additions.

“No one needs J. Crew to provide yoga clothes,” Drexler said. “But it’s a matter of style, fit, quality, having the right colors and details, and being differentiated.”