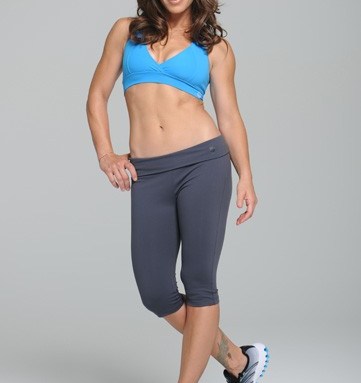 LOS ANGELES — Known for delivering tough fitness tips on the reality TV competition “The Biggest Loser,” Jillian Michaels is warming up to show her softer, stylish side in a new activewear line with K-Swiss.

Michaels, who began endorsing K-Swiss’ Tubes sneakers last spring, is launching Jillian Michaels Collection by K-Swiss on April 15 as part of an exclusive multiyear deal with the Westlake Village, Calif.-based footwear company. It’s the 37-year-old trainer’s first attempt at designing clothes. As someone who spends most of her day in workout gear seen by millions of people, she is particular about what she wears, much of which is customized for her.

“That s–t needs to look good,” Michaels said. “For me, fitness clothes are so geeky. It can be fresh. It can be fun. It can be cute. I want to work out in the gym with it, and I want to wear it to brunch.”

A petite brunette who grew up in the San Fernando Valley, Michaels easily commands a room with her firm hazel-eyed stare and straight-talking potty mouth. Because she rarely steps on the red carpet or goes to parties, the public doesn’t get a chance to notice that she is a fashion plate. On a recent Saturday afternoon, she arrived at Siren Studios in Hollywood for a photo shoot in low-riding sweatpants and a PETA T-shirt, toting an Hermès parchment leather travel bag that costs upward of $8,500. She’s as quick to share the story behind the python-skin wallet she found in Africa as she is to list her favorite fashion labels, such as Rick Owens, Ann Demeulemeester and Yves Saint Laurent. “I wear Gucci a lot,” she added.

The style inspiration for K-Swiss can be traced to the casual portion of Michaels’ closet, which includes brands such as Aviator Nation, Ever and Hysteric Glamour. Her collection of 300 vintage Ts influenced the heathered fleece and raw edges in the K-Swiss line, which will launch at Nordstrom and Amazon.com, the latter of which is one of the biggest sellers of Michaels’ fitness DVDs. The inaugural group offers 13 styles, ranging from cutoff sweatpants to a halter sports bra that Michaels said “makes your boobs a size bigger.” Stretching the Supplex-Lycra fabric on a pair of capris with a fold-down waistband, she noted: “You’re not seeing through that. It’s also thick and hides any cellulite dimples on your ass.”

The spring palette covers neutral hues such as charcoal gray as well as bright tints like bubblegum pink and lime green. The fall lineup will grow to 40 styles, including a Run-DMC-inspired tracksuit and dance pants. Retail prices run between $32 and $90, an affordable range that Michaels espoused because, she said, “everyone is broke right now” in a tough economy. Down the road, she envisions unveiling a lower-price apparel offshoot for mass retailers such as Kohl’s.

To empower people, Michaels added motivational mantras on some items. For instance, a slim hoodie features an appliqué of an eagle next to the word “Fly.” Proceeds from a long-sleeve henley and two hoodies will benefit the Alliance for a Healthier Generation, a charity that aims to reduce childhood obesity.

Sizes start at XS, which is the equivalent of a size zero, and go up to XXL, which is a size 14. “This is not about excluding anybody,” Michaels said, noting her target customers are “women who want to be healthy, active and look cute doing that.”

One group that Michaels won’t reach is men. “I don’t propose to tell a man about his body,” she said. “I know about the cellulite on the back of my ass. I know how to make that s–t go away.”

Fitness and fashion have been merging over the past few years. Athleta, which is owned by casual clothier Gap Inc., has offered items such as a running skort in hot pink and teal, while Adidas has collaborated with Stella McCartney and Y-3 on ongoing collections.

“Here’s the problem with that [McCartney for Adidas] line: It’s a fortune,” Michaels said. “It doesn’t go up to XXL, it’s not available in Indiana and it’s not affordable.”

Therein lies an opening for K-Swiss.

“Our competitors in the industry all have a higher percentage of apparel than we do,” said David Nichols, executive vice president at K-Swiss. “Adidas and Nike sell a ton of apparel. We certainly feel it’s a real opportunity for us.”

K-Swiss hopes that teaming up with Michaels will boost the company’s profile and profits. Its net loss widened to $68.2 million last year from $28 million in 2009, as revenue shrank almost 10 percent to $217 million from $240.7 million. Apparel and accessories made up 8 percent of K-Swiss’ sales last year. In comparison, five years ago, K-Swiss reported net income of $76.9 million on revenue of $489.3 million.

Although Nichols declined to estimate sales for Michaels’ line, he said she plays a pivotal role in K-Swiss’ training and running program.

“Obviously, we’re borrowing her credibility in this whole venture,” he said. “She just helps validate what we’re doing.”

The K-Swiss collaboration also confirms the appeal of Michaels’ brand in the marketplace. Planning to leave “The Biggest Loser” TV franchise after the current season, she is prepping for the April 5 release of her first self-help book, titled “Unlimited: How to Build an Exceptional Life.” She also starts her gig as the face of health Web site EverydayHealth.com next month. She’s got three workout DVDs slated to be issued this year and her fitness video game for Xbox will hit stores this holiday. While she takes a break from TV for 18 months to strategize her comeback on the tube with a daytime talk show, she’ll remain in the public eye later this year with covers for Shape, Fitness and other magazines, in which she promised to plug her clothing line.

“I’m always on TV and the Internet,” Michaels said, adding of the collection: “I wear it everywhere I do fitness.”