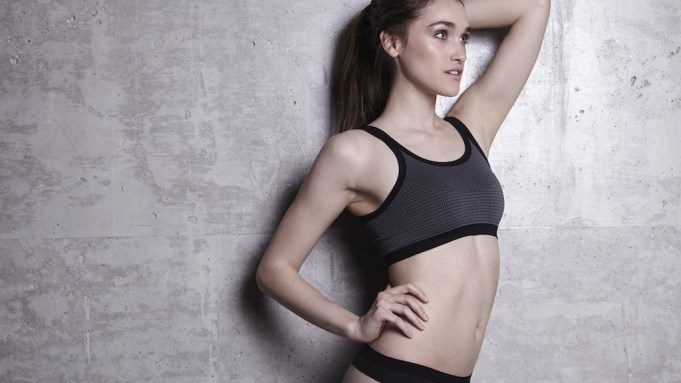 Canadian women’s underwear start-up Knix Wear is off to a running start after the brand made crowd-funding history on Indiegogo by raising $60,000 for 2,111 presold pairs of undies in 44 days.

The target goal for the new brand was $40,000, but one major retail player stepped in and raised the ante: Hudson’s Bay. Beginning in mid-September, Hudson’s Bay will sell Knix Wear in 18 flagship stores across Canada, said Joanna Griffiths, a 29-year-old entrepreneur and founder of the brand. The undies, which are packaged in contemporary-looking cardboard canisters, will be merchandised on point-of-purchase displays designed to sit on counters next to cash registers.

The collection will also be sold at specialty lingerie boutiques in Canada and the U.S. in September, as well as knixwear.com. Plans are to expand the brand into the international market in the near future.

Suggested retail prices average $30 to $36. Colors are black and beige, and sizes range from S to XXL.

Three groups featuring boyshorts, bikinis, thongs and high-waist briefs are Knix, a basic, seamless style for everyday wear; Knixy, an all-day lace look that can be worn from morning to night, and FitKnix, workout underwear that wicks away sweat.

Griffiths holds two business degrees — one from Queen’s School of Business and an MBA from INSEAD, where she won the women’s award for Entrepreneurship and the Business Venture Competition for Knix Wear, securing $20,000 to begin the business. She is a former marketing specialist in the entertainment industry, where she says she worked with the likes of Maroon 5, The Black Eyed Peas, Oprah Winfrey and George Clooney.

The inspiration for Knix Wear came about in 2009 when she was having a conversation with her mother, a doctor, about the physical realities of being a woman.

“It was the first time that I heard about stress incontinence or ‘little leaks,’ and that it affects an estimated one in three women. I had only seen the products that existed in the incontinence section of the drugstore aisles, and I thought there had to be a better solution,” said Griffiths. “It was that realization that sparked the idea for Knix Wear.…It dawned on me that thanks to technology almost everything has evolved, everything but underwear. I identified the opportunity to create underwear designed with women’s needs in mind, that wicked away moisture, naturally eliminated odor and was leak-resistant, and the idea for Knix Wear was born. I spent my year at INSEAD researching and interviewing women of all ages to really understand the product requirements and what women wanted from their underwear. That led to our brand pillars of fashion, function and fit.”

She further noted that while this is her first entrepreneurial venture, she feels bullish about building the business based on a “fantastic team of people working with me with extensive experience in apparel and more specifically lingerie.”

“The collection’s designer had previously created collections for major brands including Victoria’s Secret, Gap Body and Nordstrom.…When we launched our crowd-funding platform, we were ready for retail with product, packaging, branding, a team and retail displays in place. Now we have dedicated shelf space for our product line nationwide, and our product will be delivered to thousands of women. It truly is an entrepreneurial dream come true,” said Griffiths.