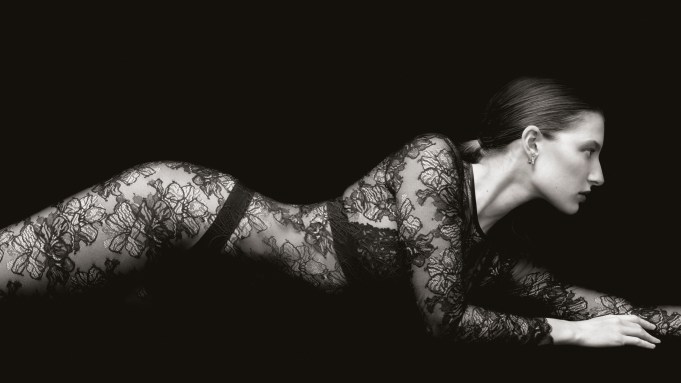 La Perla is taking a few cues from its past.

The luxury lingerie brand unveils its ’80s Archive Revival collection today — just in time for International Women’s Day — drawing inspiration from the decade and celebrating girly underpinnings (meant to be both seen and unseen) as the brand continues to grow its ecosystem.

“This capsule collection emanates a time that celebrated empowered femininity,” Pascal Perrier, chief executive officer of La Perla Fashion Holding N.V.’s main subsidiary, told WWD. “The ’80s was an era that was a tipping point in underwear trends, where the lines between innerwear and outerwear blurred. For many it was a decade of self-expression and more specifically a period where women embraced lingerie to empower themselves, with fashion icons like Madonna and Cher, who each wore La Perla for their respective music videos and single covers.”

La Perla’s latest muse is London-based model and actress Iris Law — aka Jude Law’s daughter — who appeared in the new campaign, which manages to be both feminine and classic with its selection of lacy black bras, underwear, bodysuits, corsets, slipdresses and accessories.

In line with Women’s History Month, female photographer Indigo Lewin shot the campaign, while model Isabela Grutman worked on a styling video for La Perla, mixing her own pieces with the new assortment, which ranges in price from $255 for a face mask to $1,903 for a dress. The 13-piece capsule is available for a limited time at laperla.com and La Perla stores, as well as select wholesale partners, such as Selfridges, Net-a-porter, Bosco and Ssense.

But the capsule is just one example of the Italian innerwear brand’s evolution — both online and offline. In December, the company unveiled the LP Lab in New York’s SoHo neighborhood. Instead of opening a new pop-up shop every few months, the walls of the LP Lab rotate periodically to give the space a refreshed look and feel.

“We’re looking to extend these formats to other markets, including the Mediterranean and Asia,” Perrier said. “An emphasis on a deeper luxury model of private spaces and [very important client] retailing is also a priority, which we are testing in a by-appointment-only space on Madison Avenue [in] New York City.”

The lingerie shop relocated to the space at 1000 Madison Avenue, not far from its previous spot on Manhattan’s Upper East Side, last fall. The same month it opened a pop-up shop at the Fred Segal store on Sunset Boulevard in Los Angeles, which runs through April 2021. In addition, the brand opened a store in Highland Park Village, a shopping center in Dallas, in August.

“Retail continues to be a pivotal piece within our channels,” Perrier said. “We’re evolving, as the world is, [in order] to serve today’s woman, as well as adapting to the ever-changing retail environment, ensuring we are placed in all key global destinations and local markets where women are shopping for luxury. Our aim is to create an intimate and boutique approach to retailing that imitates and reflects our intimates offering.

“China remains an important market for luxury and La Perla,” the CEO continued. “Following the launch of four stores in the region this past year, we’ll be continuing to expand our retail footprint to other key cities, alongside investing in our local e-commerce proposition.”

Those online opportunities include La Perla’s place in Amazon’s Luxury stores and “Villa La Perla,” a digital platform celebrating the anniversary of the Maison collection, both of which were rolled out last fall. During the holidays, the company launched “La Perla Concierge,” a virtual service that offers online bridal consulting, styling tips and gift recommendations.

Meanwhile, La Perla has also expanded into beauty, shapewear and plus-sizes in the last 18 months, all of which Perrier said has helped the brand reach a wider demographic — even during the pandemic.

“Beautiful lingerie has a transformative power,” he explained. “We observe customers are prioritizing their own comfort without compromising on style, quality or design. Whether our customers are looking to wear La Perla for something special or at home as an everyday luxury, more than ever they want to invest in pieces which help them feel great and stand the test of time.”