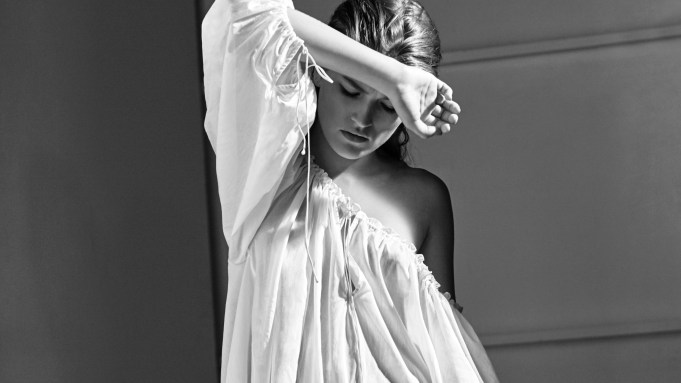 LONDON – The opening of the Body Studio at Selfridges, with its spotlight on the lingerie, lounge and athleticwear, is emblematic of what’s happening in London where brands are popping up – or moving into – similar categories.

Matthew Williamson and Charlotte Olympia are among the British brands to step into the ath-leisure arena, while Ivy Park, a performance brand venture between Beyoncé and Sir Philip Green, launched in April. Mary Katrantzou launched a second capsule with Adidas last year.

Three Graces London, meanwhile, launched last year with a focus on at-homewear. Founder Catherine Johnson said she’d moved on from wearing “the really sexy Agent Provocateur pieces,” and needed to swap them for something new.

“I wanted to look elegant at home, but also feel comfortable and confident, not overexposed. In that respect, I wanted pieces that were similar to the modern clothes I wore outside,” she said.

The label features cotton nightwear, including ruched maxi nightgowns, loose camisoles and robes with lace paneling. Customers wear the pieces outside the home, especially as beachwear, which has prompted Johnson to expand her offer to holiday and resort clothing for the 2017 season.

“We’ve moved more toward cotton because it’s what the buyers love about what we do. They feel like silk is covered by brands that are more well-known – there’s La Perla and a host of brands who are doing this really well – but we offer a contemporary spin on cotton,” she said.

Pieces are made using Peruvian and Egyptian cotton spun in Switzerland.

Johnson said consumers’ lifestyles and the popularity of social media have contributed to the rise in the loungewear category.

“People have incredibly busy lives, and when they get home, they want to indulge themselves. The other reason is social media: People are communicating about their home lives a lot more, so it makes them feel like they want to put more effort in.”

Three Graces London will also be launching on Stylebop.com, Matchesfashion and Net-a-porter.com later this year.

Mario Eimuth, cofounder of the Munich-based site Stylebop.com, said loungewear is becoming a “key aspect of the luxury experience, as more and more customers seek refined and elevated alternatives to athletic wear.”

He said Three Graces London appealed because it specializes in creating pieces that are “modern and fashion-forward, yet extremely easy to wear; a mix that feels bespoke and intimate.”

As reported, Matthew Williamson has unveiled an activewear line in collaboration with fitness label USA Pro. The 10-piece capsule includes leggings, sports bras, tank tops and sweatshirts and features some of Williamson’s most identifiable prints.

“I’m no expert in sportswear, but USA Pro are experts in the field, so this was a project I was keen to do. There are a lot of technicalities involved with the fabric alone, so I worked with the team, who is obsessed with the technological side of creating the clothes, to make sure that ours are really good quality because there’s so much out there,” said Williamson.

Footwear designer Charlotte Olympia also recently tapped into the ath-leisure trend via a clothing collaboration with U.K.-based fitness destination Bodyism that includes leggings, sports bras, tank tops and sneakers. Prices range between 75 pounds, or $108, for a sports bra to 295 pounds, or $425, for the gym bag.