Eight women and two men will strut their vintage stuff in New York on Wednesday to promote the second season of the series, which begins Friday. 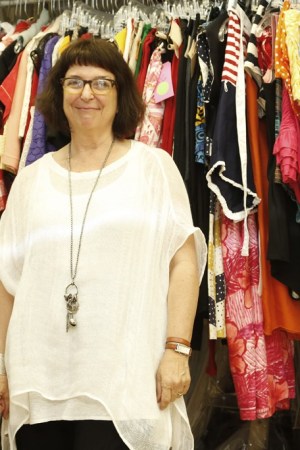 NEW YORK — Styled to look like they stepped off the set of Starz’s “Magic City,” a series set in Miami in 1959, give or take a few years, eight women and two men will strut their vintage stuff in Times Square on Wednesday to promote the show’s second season, which begins Friday.

The fashion show at Duffy Square, between 45th and 47th Streets, Broadway and Seventh Avenue, will begin at 10 a.m. and will be repeated at least six times throughout the day. The beachwear hints at languid days sipping mojitos by the pool at the Deauville Hotel, where exterior shots of the show are filmed. In the series, the hotel is called Miramar Playa and is owned by Ike Evans (Jeffrey Dean Morgan), who sold his soul to the mob for a loan. “Magic City” was created by Mitch Glazer and stars Danny Huston as mobster Ben Diamond, Jessica Marais as his wife, Lily, and Olga Kurylenko as Ike’s wife, Vera.

Costume designer Carol Ramsey said her criteria for the bathing suits in the fashion show Wednesday is that they “look hot and sexy.” That means European bikinis, which were worn by actresses, Playboy bunnies, pin-up girls and, of course, Europeans, she said. “They caused quite a ruckus when they came out,” said Ramsey.

A model trying on a striped swimsuit with strategically placed mesh walks out of the changing area. “It needs something,” Ramsey said. “How about a big towel.” Slinging a black beach towel over her arm, and placing a cigarette-holder ring on her finger, Ramsey judges her ready. The same model changes into an orange bikini of Ramsey’s design made from a fabric with a satin finish and chinoiserie pattern. “In the blazing sun that’s going to be a hot, sultry color,” Ramsey said.

The series, which has a budget of $8 million an episode, spends about $1.2 million on costumes for the season. “It’s not much,” Ramsey said. “We’re always pinching pennies. Still, it’s a lot for TV.”

Ramsey does her prep work in Los Angeles, shopping at the Western Costume Co., a vintage “closet to the stars. We sent two semi trucks down to Miami filled with costumes,” she said. “I have a full-time shop in Miami. I get to design gowns, bathing suits, even men’s suits and ties. There’s a lot of original design. We dress 600 people every nine days, including real period-correct underwear for the women.”

Ramsey said wearing period undergarments makes the actresses stand a certain way that looks authentic to the time. “It gives the correct shape to the clothes,” she said. “The pointy bras and full-length girdles give the correct under structure to the clothes.” Sweating the vintage details isn’t just “an exercise in being historically accurate,” Ramsey said. “We have to create a world.”