The combined entity has projected annual revenues of more than $5 billion on a pro forma basis. 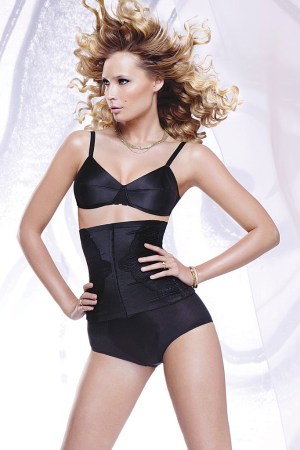 The world of intimate apparel is headed toward further consolidation.

The newest acquisition to rock the $14.5 billion innerwear industry in the U.S. is Hanesbrands Inc.’s acquisition of Maidenform Brands Inc. in a cash transaction valued at $575 million.

The combined entity has projected annual revenues of more than $5 billion on a pro forma basis. That compares with various analysts’ revenue estimates of $5.5 billion for Coach Inc., $7.4 billion for Ralph Lauren Corp., $8.7 billion for PVH Corp. and $11.5 billion for VF Corp. among the U.S. global apparel powerhouse firms.

Innerwear giant Hanesbrands is a $4.5 billion firm with a portfolio of heritage brands including Hanes, Playtex, Bali, Just My Size, Barely There, Wonderbra, Champion and L’eggs. It has about 51,500 employees in more than 25 countries. Maidenform, a $573.9 million company, maintains a roster of well-known brands including Maidenform, Flexees, Lilyette, Self-Expressions and Sweet Nothings, as well as the licensed Donna Karan and DKNY intimates labels. It has 1,250 full-time employees in 62 countries.

Hanesbrands said the deal is “expected to be accretive to earnings per share in the first 12 months after closing and is projected to deliver full benefits within three years of more than $500 million in incremental annual sales, 60 cents in EPS, $80 million of operating profit and $65 million of free cash flow.”

The boards of both firms have already approved the transaction. It still is subject to the approval of Maidenform shareholders. Presuming no glitches, the deal is expected to close in the fourth quarter.

A proxy will be sent out to Maidenform shareholders in about 15 days. Guggenheim Securities served as financial adviser to Maidenform, while Goldman, Sachs & Co. was the adviser to Hanesbrands.

Credit ratings agency Standard & Poor’s said Wednesday that Hanesbrands’ “BB” corporate credit rating and “BB” unsecured debt ratings remain unchanged. It also said that it expects the company to use its new $1.1 billion senior secured revolving credit facility due in 2018 for incremental debt to fund the acquisition and for working capital needs.

Investors of both firms liked what they heard Wednesday regarding the acquisition. They sent shares of both companies up: Hanesbrands gained 7.9 percent to $57.58, while Maidenform shot up 22.4 percent to $23.36, close to the offer of $23.50 a share. The offer price represents a 30 percent premium to Maidenform’s average closing price over the past 30 days.

In a conference call Wednesday morning, Richard A. Noll, chief executive officer at Hanesbrands, told analysts that the company had “achieved yet another significant milestone in using our free cash flow to create shareholder value” by acquiring Maidenform.

Noll said that 20 months ago Hanesbrands embarked on a path to maximize the value of the company’s free cash flow by reducing debt, instituting a dividend and later exploring options for acquisitions with companies that shared the same synergies.

“This acquisition is a great way to create value for our shareholders by significantly enhancing our financials, and it’s a great way to spend less than 18 months of our free cash flow,” said Noll. “Our synergies are fully realized….We believe Maidenform should annually add over 60 cents a share to earnings and $65 million to free cash flow.”

Noll singled out specific criteria for a Hanesbrands acquisition, which he said made Maidenform a winning candidate:

• Maidenform is positioned in the same core category of intimates as Hanesbrands with bras, shapewear and panties that have strong distribution at department stores, national chains and mass merchants. Noll described it as “our sweet spot.”

• Noll pointed out “complementary growth opportunities,” saying, “The Maidenform Brands portfolio fits well with our iconic brands. They have a great average-figure bra business that complements our full-figure bra business. They are recognized for shapewear, while we have an established panty business….By applying our Innovate-to-Elevate strategy across all brands and tapping into our respective expertise, we create a combination that should benefit our consumers, retail partners, and our shareholders.”

• A significant synergy opportunity will be created by leveraging Hanesbrands’ vertically integrated supply chain that will eliminate duplicate stand-alone company costs. “We have a proven track record for using our supply chain to create value and successfully manage transformation projects,” explained Noll.

Lastly, Noll noted that the acquisition creates “great financial returns” for shareholders. “At $23.50 a share, this deal has an enterprise value of approximately $575 million and is valued at approximately 9.5 times their 2012 EBITDA,” said Noll. “Post synergies, we expect this multiple to drop to less than 7 times. This deal is expected to deliver an after tax IRR [internal rate of return] in the mid-teens, and we believe it is a better use of free cash flow than share buybacks.”

Noll further noted that excluding acquisitions and restructuring-related costs, he anticipates the deal to be accretive in 2014. “This is a very manageable deal for us, both from funding and from an execution standpoint, and therefore, we are confident in our ability to generate synergies that should ultimately add 60 cents a share to our earnings.”

Meanwhile, the courtship between Hanesbrands and Maidenform was speedy.

Matt Hall, chief communications officer for Hanesbrands, said negotiations had been taking place since May.

“Maidenform approached Hanesbrands….Now they’ll have to file a proxy for their shareholders to vote on, which should take two to three weeks,” said Hall.

Regarding integration plans, Hall said, “There’s very little known about the integration….We make most of our intimate apparel ourselves. We do have an overall supply chain, and over time we’ll do Maidenform production in-house. We own factories in Honduras and El Salvador, and in Thailand and Vietnam….The interaction between management teams has not yet begun.”

Maurice Reznik, ceo of Maidenform, could not be reached Wednesday. But Christopher W. Vieth, Maidenform’s chief financial officer and chief operating officer, said of the acquisition: “Maidenform went through a very thorough and robust process, and these two companies fit together very nicely….Intimate apparel is incredibly competitive and always has been….Retailers like it because it’s a very profitable category with products that are stabler than other apparel categories. Design and innovation is something that defines Maidenform, and that’s what attracted Hanesbrands.”

It couldn’t be determined at press time what role Reznik will have in the new combined firm, although more details are expected in the proxy that Maidenform will send out to shareholders and file with the Securities and Exchange Commission. In a “Town Hall” presentation by Maidenform filed with the SEC Wednesday, Robin Costa, senior vice president of human resources for Maidenform, said, “In the coming months, we will begin to communicate information regarding integration planning to ensure a seamless transition once the deal closes. One thing I can tell you now is that Hanes is a multinational company that offers competitive pay packages and benefits. That said, it is too early to know specifics related to job opportunities or impacts, but we are committed to treating any affected employees fairly and with respect.”

Steven L. Marotta, senior analyst at CL King, said, “We are a little surprised at HBI’s decision to purchase MFB, as the women’s intimate apparel division appeared to be a lesser priority when compared directly to opportunities associated with Champion and Hanesbrands. Considering the benefits of layering in the incremental units onto current manufacturing capacity combined with the three-year accretion associated with the deal, though, the ultimate merits are self-evident.”

Marotta said that the deal makes sense for both firms “at this junction. Maidenform is having a hard time being independent and will benefit from a larger platform. Hanesbrands’ growth is normalizing, and the acquisition is a nice opportunity for them, given their manufacturing platform.”

As for what Hanesbrands might need to do next to move the needle, Marotta said the company “may have to go a little farther out. There are no other ponds to swim in since they’ll have the dominant market share, post acquisition.” He speculated that one option might be the “smaller men’s activewear brands so Hanesbrands can leverage the experience and successes it has with Champion.”

Given the consolidation in the market, the intimates category might be mirroring the beauty sector where new, younger firms need to attract venture capital or private equity where they can spend time growing before they attract the attention of a far larger strategic buyer.

The analyst noted that while that’s certainly an option, it’s by no means the only one out there. “Sometimes staying private is the best way of growing the company. Spanx has done a great job of growing [on its own]. There’s no one particular formula.”

The Hanesbrands-Maidenform union follows a flurry of acquisitions over the past year in a highly competitive industry where acquisitions and mergers had been on hiatus in the early Aughts. The most recent activity was in June, when SMS Finance, the Italian financial services provider owned by telecommunications entrepreneur Silvio Scaglia, paid 69 million euros, or $90.3 million, to buy Bologna, Italy-based La Perla. In December 2012, Delta Galil USA, a subsidiary of $817.8 million Delta Galil Industries Ltd. in Israel, purchased the trademarks of LittleMissMatched, a $20 million specialist of socks and apparel for kids, and in July 2012 acquired Schiesser AG, a leading maker and marketer of men’s, women’s and children’s underwear for the German market, for about 68 million euros, or $90 million.

The $750 million Komar company bought Le Mystère, a $25 million foundations brand, in November 2012, followed by a second acquisition in August 2012 of Biflex Intimates Group LLC., a $60 million maker of proprietary intimates for retailers. In April 2012, Wacoal Holdings in Kyoto, Japan, the $2.02 billion parent company of Wacoal America Inc., got the ball rolling again when it paid 152 million pounds, or $243.1 million, for the privately held Eveden, which at the time generated sales of more than $125 million.

And there was PVH’s $2.9 billion acquisition of Warnaco Group Inc. — closed earlier this year — that included the latter’s intimates businesses consisting of Calvin Klein Underwear and the heritage brands Olga and Warner’s.