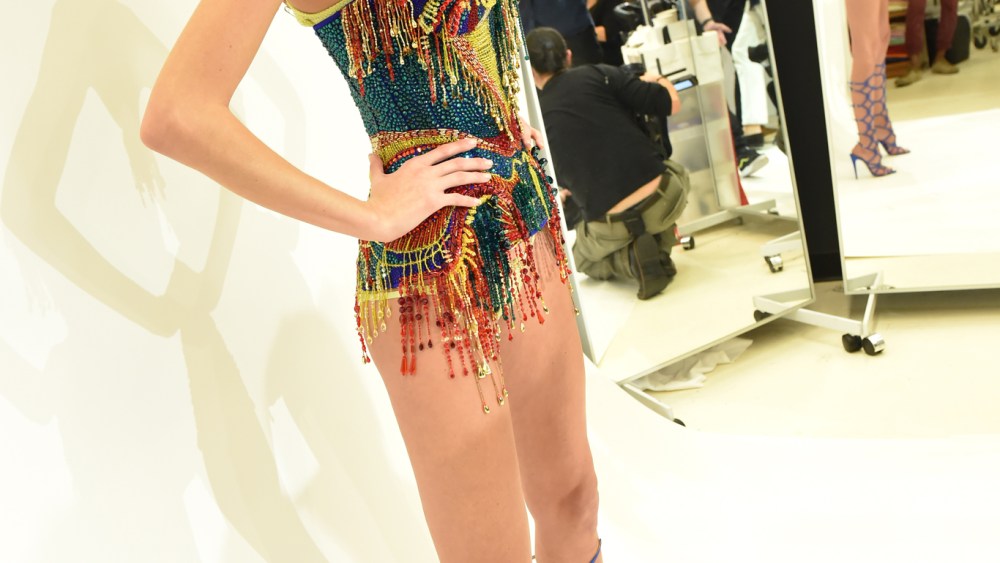 At one of several pre-show fittings, Neophitou, the collection creative director of the Victoria’s Secret Fashion Show, was praising newly minted Angel Martha Hunt, prompting her to walk up and down a short runway for a team of in-house photographers. For the 20th annual show, to be held on Tuesday at The Lexington Avenue Armory in Manhattan, Hunt will wear the collection’s Swarovski’s bespoke, sparkling corset with over 90,000 gold, red, emerald and blue crystal beads and pendants created by Parisian couturier Serkan Cura. (Last year, Lily Donaldson did the pre-show unveiling honors.)

“I know [in advance] who will wear each look,” explained Cura of his meticulous design process. “I take all the measurements, I make all the composites. It’s why you can see that everything fits perfectly, and the Swarovski crystals won’t hurt [the models’] skin…Everything is perfectly done. We gave so much energy and passion into each look.” It is Cura’s third time collaborating on costumes for the behemoth runway show, this year featuring 75 looks.

If Hunt’s Swarovski corset is the main event, her Angel wings — embellished with over 20,000 crystals and 130 feet of LED lights — are the denouement. Featuring 1,200 individual lights, the wings glow with the help of a battery-pack, weighing in at 19 pounds. “I’ve worn wings before, but these are special,” said Hunt, showing them off under dim lights. “They’re heavier than ever before and light up like a firework…”

This year’s show will be divvied up into six categories: Boho/Psychedelic, Portrait of a Lady, Butterfly, Pink USA, Ice Angels and the finale group, Fireworks. A total of 47 models will be featured, including a crop of 12 fresh faces, of which Kendall Jenner and Gigi Hadid are the most buzzed about. “Finding new talent is always exciting for us,” said Monica Mitro, the show’s executive producer.

Also buzzed about: the abrupt cancellation of Rihanna’s headlining performance. She was replaced, at the last minute, by English singer Ellie Goulding. “Ellie’s gonna kill it,” said Hunt. “It’s a great opportunity for her. Selena Gomez is such a sweet girl with such a sexy voice, and The Weeknd will give us that sexy chemistry that we want on stage.”

Hunt first walked the Victoria’s Secret runway show in 2013 — but not as an Angel. “It’s a completely different experience now,” said Hunt on her third consecutive year. “I’ve come into my own more. Clearly, the Angel title helps with that. It feels better going into the show as an Angel; it’s a self-esteem boost.” Still, she admitted she’s not totally impervious to pre-show jitters. “But nerves are good, because it means you really care,” she said.

She plans to rest as much as possible before the show, though between runway rehearsals, pre-show fittings, daily workouts with a trainer and other forms of pampering — like massages and facials — it will be hard to find the time.

“I’m doing all these things for me that will help me feel better going into the show,” she said. “And I’m really just trying to enjoy the moment. It’s been fun seeing all the social media videos.”

Hunt’s Instagram account, @marhunt — where she has 1.2 million followers — is a mix of workout selfies (with the de rigueur “#trainlikeanangel” hashtag), modeling shots and photos of her dog, Bear. “You’re always sort of questioning how much of your personal life you want to show [on Instagram],” said Hunt. “As a model, it’s really easy to just put out professional pictures from work, but I’ve come to understand that fans want to see more of your personal photos. So I’m trying to push more out there, but it is a little bit of a struggle because you do want to keep some parts of your life sacred. At the same time, that’s not the world we live in now…and it’s nice to show your day-to-day life and humanize things a bit. It’s not always glamorous. We’re putting in the work and effort to make all this fantasy happen.”

Hunt plans to attend the show’s annual after party and then treat herself to pizza, ice cream and whatever else she feels like. “It’s such an adrenaline rush that you kind of just want to stay up all night and ride out the rush,” she said.

The Victoria’s Secret Fashion Show will premiere at 10 p.m. EST on Dec. 8 on CBS.