The economic climate, bad weather in many markets, terrorist attacks in Europe, political unrest in France and the show's move to Lyon all hindered traffic. 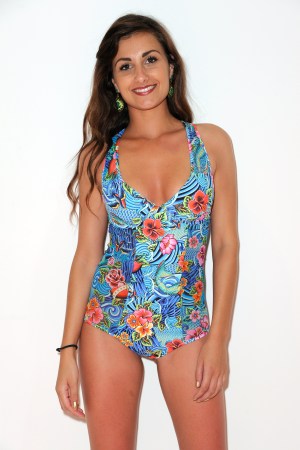 Held in Paris since 2008, the sister shows decamped to the Eurexpo convention center in Lyon from July 9 to 11 because of the UEFA Euro 2016 soccer final in Paris, making it more difficult for international buyers to attend. Certain major lingerie brands like Aubade were also absent. The economic climate, bad weather in many markets, terrorist attacks in Europe and the spate of strikes and political unrest in France were additional hindrances.

“There were a lot of brands missing. That means we don’t have a global overview and have to go and see them elsewhere, making things more complicated for buyers,” commented Le Bon Marché lingerie department director Laurence Dekowski.

“We have some buyers who didn’t come because it’s hard to get here,” admitted Luli Fama co-founder and designer Lourdes Hanimian. The brand’s colorful swimwear has won it a loyal celebrity following, and it took home Mode City’s Beachwear designer of the year prize.

The growing beachwear focus of lingerie brands was very visible, in line with sales increases in the category, with many brands including Lise Charmel, Simone Pérèle and L’Agent by Agent Provocateur increasing their offer not just in swimwear but in categories like cover-ups and accessories. VFB Lingerie-owned Lou launched its first swimwear line at the show.

“Classic brands are more difficult, but we carry designer and creative brands, and the market is very dynamic,” said Le Bon Marché’s Dekowski. “We are carried away by the growth of swim and beachwear. Swim is taking a greater part of sales for lingerie brands in the summer.”

For spring 2017, brands were focusing on color, especially vibrant tropical prints both in swimwear and lingerie. “We’ve been very pleased with the swimwear offer,” said Katherine Salt, co-owner of Plums Lingerie in Jersey, Channel Islands. “Collection-wise, it’s a lot stronger than last summer. There are some very nice prints and a lot of tropical.”

In lingerie, buyers praised the arrival of more appealing basics in a broader color palette. Examples included new spacer bras in Empreinte’s Cassiopée range available in a pretty cornflower blue as well as tie-dye triangle bras and matching items from Vanity Fair, priced at 185 euros, or $204.97, for a set at retail.

Many exhibitors cited the complexity and lack of visibility on the lingerie market going forward. “It depends on the region, but the market is complex; we have very little visibility,” commented Simone Pérèle product director Stéphanie Pérèle. “The U.S. and Germany are growing strongly, but France has been difficult over the past six months.”

In such a context, creating products that stand out is essential, exhibitors observed. “You need to find ways of creating excitement around the brand,” said Pérèle.

In line with this, brands in the Limited Edition section of Mode City were more upbeat. “We’re very pleased with the international attendance,” said Valérie Moënne, founder of printed hosiery brand Marie Antoilette. “We’ve seen buyers from the U.S., Canada, Qatar, Spain and the U.K. More and more boutiques are looking for products from small designers,” she observed.

VFB Lingerie, owner of brands including Lou and Variance as well as Vanity Fair in Europe, made its return to Mode City. The firm was bought by investment fund Perceva last year and took on former La Perla executive Joelle Pellegrin, who said she is focusing on boosting international sales, which currently represent around 5 percent of its revenues. “We hope to reach 20 percent in international sales by 2020,” she commented. Another focus is building the company’s prestige offering under Lou and Vanity Fair, which currently represents around 20 percent of sales, and are “underrepresented,” according to Pellegrin.

Mode City debuted the “Sportiv” area, focusing on the trend for high-end sportswear, within which Australian market leader Lorna Jane was present picking up new multibrand accounts in France, Albania and Lebanon as well as Irish department store Arnott’s. “There are an awful lot of lingerie stores that are trying to develop this offer,” said Lorna Jane France comanager and cofounder Mégane Torregrossa. The brand’s wholesale prices in Europe range from 19 to 41 euros, or $21 to $45.

At Interfilière, ath-leisure was also a focus. “We’ve seen from consumer research that women are looking for ath-leisure, not just for sport, but for wearing out and relaxing,” said Invista executive vice president of apparel marketing and technology Robert L. Kirkwood. “We see an opportunity with intimate apparel brands for them to expand and participate in this trend.” The company’s Lycra Moves Athleisure concept, which was introduced at the show, combines several of its technologies to target such brands.

Newcomer Liberty Art Fabrics exhibited its growing range of colorful prints and jacquards for sportswear, notably its performance jerseys for swimwear offering properties like chlorine resistance and UV protection, which range in price from 12 to 16 pounds, or $15.75 to $21 at current exchange, per meter.

Another new exhibitor, U.S.-based Bemis, was showcasing its bonding technology, with which it is increasingly targeting the intimate apparel segment. “It’s been really good; we’ve seen some really big name brands come by,” said Bemis global brand manager Lacey Johnson. Key innovations include its Flow-Free adhesive that enhances breathability and removes the need for seams, as well as having fast-drying properties, making it particularly suitable for sports bras, for example. “Our intimates division has been growing double digits for the past three years,” said Johnson.