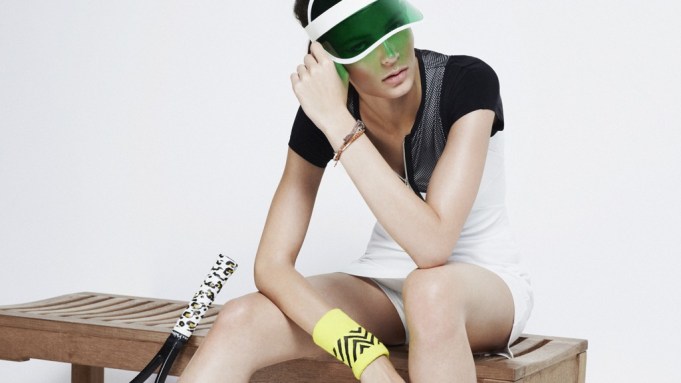 LONDON — Stefani Grosse, founder and creative director of Monreal London, was just six years old when she picked up a tennis racket and faced down Steffi Graf on a tennis court in their native Germany. While Grosse’s passion for the sport remains, her path led her away from the Grand Slam circuit that Graf pursued and to the Parsons School of Design, where she won several prizes and went on to design for Donna Karan and Calvin Klein, creating a number of Oscars and Golden Globes dresses along the way.

Now based in London, Grosse is capitalizing on a gap in the market with her brand, Monreal London, a luxury women’s tennis wear collection that straddles the line between fashion and functionality, without compromising on style or performance.

Her first season was for spring 2013, and the collection is already stocked at Harrods, where it saw a 37 percent sell-through in its first week on the shop floor, and where Victoria Beckham was the first to buy the brand’s signature Vogue dress. Who knew Beckham even played tennis?

“Tennis and fashion are two of my favorite things in the world but there was just no overlap between the two. I found tenniswear dull and, on the whole, unsexy. There was definitely a gap there,” Grosse told WWD.

“The total tennis apparel market is worth $1.7 billion and tennis is the fastest-growing traditional sport in America, growing at 37 percent between 2000 and 2011 — so I recognized that there is a legitimate business opportunity in creating a collection that is sexy and functional and that would look as good off the court as on it,” she explained. “And it’s working; at some retailers, women are coming in and buying one of every style. Like me, they want to wear something that looks as good as it performs.”

The brand launched with a collection of 10 pieces, including dresses, jackets and a pair of shorts, priced from $113 to $362. Grosse also released a collection of graphic printed grips, tapes that are wrapped around the handle of tennis rackets to improve the hold, which retail for $11. Stockists of the collection to date include Colette in Paris, Harrods, Wigmore Sports and The Queen’s Club in London, and Masons Tennis in New York, as well as Yoox online.

Masons has reached out ahead of the U.S. Open, which begins on Aug. 26, to reorder stock in order to cope with heightened demand for the styles.

Moving forward, Grosse has plans to expand the brand into golfwear, her other passion, and accessories in the coming seasons and currently is seeking to find 1 million pounds, about $1.5 million at current exchange, in investment to do so.