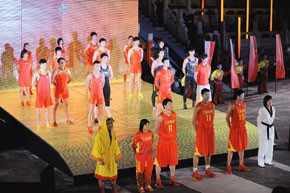 BEIJING – Set against the dramatic backdrop of Beijing’s Forbidden City at dusk and ushered in with a tightly choreographed show by martial artists and traditional drummers, Nike this week unveiled its team uniform designs for 22 Chinese sports federations competing in the Summer Olympics in August.

The uniform designs, created by Nike for all but six of the country’s athletic teams taking part in the first-ever Olympics to be held in China, step beyond the basic red and yellow of the past, incorporating two graphics in the mix. One design includes select written characters from the Chinese national anthem; the other is an artistic graphic modeled on ancient symbols found in the famed tomb of the Terracotta Warriors in Xi’an.

Company officials said the uniforms, including stylized versions of the Nike Swift Suit, represent an intensive collaboration with Chinese athletes to design high-performance wear that shows off their national heritage during the country’s proud moment in the global spotlight.