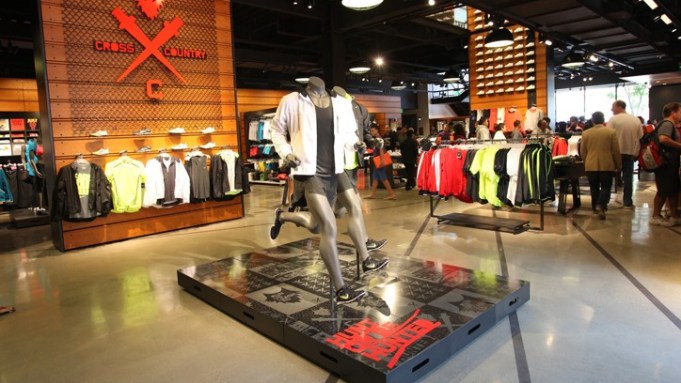 Nike Inc. has a successor to its 20-year-old Niketown concept.

The so-called brand experience store, unveiled this month at the revamped Santa Monica Place in Southern California, is a slimmed-down multicategory space that seeks to capture the scope of the brand without the expansive and costly retail footprint of Niketown. It consists of two levels of 10,000 square feet apiece, compared with the 30,000 to 50,000-plus square feet of Niketown’s 10 U.S. locations.

Three or four more of the stores could roll out this year, said Jeanne Jackson, Nike president of direct-to-consumer.

During a tour of the Santa Monica unit, Tim Hershey, Nike vice president and general manager of retail, said, “The difference here are the experiences. It is beyond just the product and the transaction. It is about how we can create relationships with the customer.”

A Niketown in Las Vegas will be revamped along the lines of the new concept by next summer, he said.

Two components are at the heart of the store’s interaction with customers: Nike+, a $29 plastic device produced in partnership with Apple that connects running shoes to iPods and iPhones in order to track calories, pace, distance and more, and Nike iD, which allows customers to personally tailor clothing, shoes and equipment to individual and team preferences. The personalization they provide has been an important differentiator for Nike that has driven consumer market research and sales.

At the Santa Monica Place store, a Nike+ station is next to wall displays of women’s and men’s running shoes on the first floor. Running enthusiasts also can join the Nike+ Run Club to take part in organized runs, get expert training tips and try new Nike footwear. The dressing room area has a chalkboard detailing the schedule of local runs.

The Nike iD setup on the second floor has four computers enabling customers to choose colors and materials, among other elements, for more than 115 styles. Fully customized products are sent to customers in about three weeks, but simpler customization for logos, numbers and names can be completed during store visits.

Throughout the store, Nike has worked in design features evoking the brand and its heritage, as well as the sports world. The brand is highlighted with the prominence of Nike’s signature orange waffle-iron patterns behind the running shoe displays recalling company co-founder Bill Bowerman’s creation of waffle-ironed rubber soles. In addition, Bowerman’s face is depicted in artwork on the wall behind the staircase between the first and second floors. A one-of-a-kind display of Air Jordan styles extends from the first to the second floor at the center of the store.

Sports are integrated into the store in fixtures and furniture that are the stuff of gymnasiums and fields of play. Reclaimed bleacher seats line the walls, wrestling mats have been turned into benches where customers are fitted for shoes, and lockers form the cash wrap. “Niketown has a wonderful brand showcase. This takes it further by rooting it in the DNA of sport,” Hershey said.

Hershey singled out teen team athletes as targets of the retail concept, and the significance of that customer base is obvious with mannequins outfitted in jerseys of local high school teams. Teen or otherwise, Nike also attempts to tantalize aficionados of action sports, which Hershey described as the “next chapter” for Nike, with a corner of the second floor devoted to the rising sports niche that contains the brand’s Paul Rodriguez and Eric Koston skateboarding shoes.

Across all sports, Hershey stressed the Santa Monica Place store has the “fullest expression” of apparel of any Nike store, as evidenced by an extensive first-floor selection of women’s clothes. The apparel push corresponds with Nike’s corporate mission to ramp up its apparel business, which at around $4.9 billion in combined annual wholesale and retail sales is less than half of its footwear volume.

Nike’s retail business generates $2.8 billion in sales, about $2.4 billion of which are from the Nike brand. By 2015, the company expects Nike store sales will add another $2.2 billion to $2.6 billion, and its retail network will increase by 250 to 300 stores. The U.S. retail network is slated to grow with a mix of brand experience stores like the one at Santa Monica Place ranging from 12,000 to 20,000 square feet and smaller single-category stores from 3,000 to 6,000 square feet, such as a running store that opened in Stanford, Calif., in April.