Ones to Watch: Talbot Runhof

Nighttime is the right time for the German-American design duo Talbot Runhof. 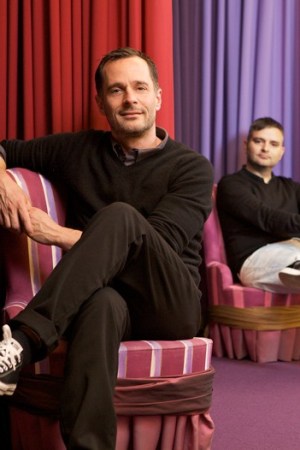 MUNICH — Nighttime is the right time for the German-American design duo Talbot Runhof.

“We’ve always included daywear in our collections. But in the meantime, we feel very comfortable with the drawer people put us into — which is evening couture,” said Mainz-born Adrian Runhof, who has collaborated with Nashville native Johnny Talbot since 1992. They founded Talbot Runhof in 2000.

Based off Gartnerplatz in Munich, where a jewel box of a boutique joins the ateliers and headquarters, the pair will show Wednesday during Paris collections.

While the label, produced by specialized contractors in the Munich area, has long been a red-carpet favorite among German celebrities and socialites, the collection can now be found in 120 specialty stores from Athens and Boca Raton to Singapore. Stars including Angelina Jolie, Daryl Hannah, Anna Netrebko and Jennifer Goodman have also worn the label.

Paris brought the international breakthrough, with its first presentation there in 2005. Runway shows followed in 2006.“We started in about nine stores with Neiman’s three years ago, and are now in about 30 doors,” Runhof reported. Bergdorf Goodman picked up the collection for last fall, and Saks Fifth Avenue started for spring, he said. America now makes up about 30 percent of sales, which industry sources peg at north of $5 million.

Neiman Marcus features the collection in its couture department. “We’re at the lower end of the [price] scale, which is what makes us interesting,” Talbot commented. Cocktail dresses retail between $1,175 and $1,500, with beaded gowns priced around $1,525.

Talbot Runhof’s specialty is an Italian silk stretch taffeta that they helped develop and feature exclusively in a rainbow of colors. “It’s woven in a such a way that we can do extra big and complex pattern pieces,” allowing them to drape and fold dresses out of one piece of fabric with no seams, Talbot explained. The resulting silhouettes are body-conscious yet forgiving, making the collection accessible to many women.

In addition to stretch taffeta, the duo is also working with regular taffeta for their next collection, which has a Thirties mood. “We fell in love with silk taffeta, which we haven’t used for 10 years. It sounds and feels like paper, and it’s great to work with this kind of volume again,” Runhof said.