The Irvine-based firm's intimates collection is due out in stores in February and will be followed by a revamped children's line for fall. 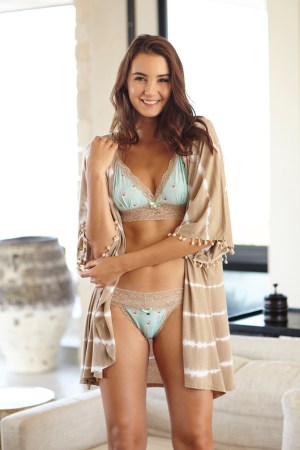 Lounge and sleepwear brand P.J. Salvage is set to launch intimates and is also preparing for a re-set of its kids’ offering under new parent Delta Galil Industries Ltd.

P.J. Salvage’s parent, Loomworks Apparel, was acquired for an undisclosed sum by the Tel Aviv-based firm in a deal revealed this month. The transaction is expected to close Friday.

Nothing changes operationally as a result of the deal and P.J. Salvage headquarters will remain in Irvine, Calif., P.J. Salvage chief executive officer Peter Burke said.

“The whole acquisition by Delta certainly opens up a whole new world for us as far as worldwide distribution and production,” Burke said.

The company thinks there’s room in the market for its assortment of bralettes, bandeaux, thongs, hipsters, shorts and kimonos — some of which can be mixed and matched with casual day looks.

“P.J. Salvage has a really strong brand following worldwide and the time is right for us to launch intimates,” Burke said. “We’re not trying to compete against a lot of the other brands putting out a basic lace, thong and panty.”

The collection includes roughly 30 stockkeeping units priced at retail, come February, between $18 and $70.

Within the intimates line will be a bridal collection aimed at the brides and bridesmaids on the night before the wedding, Burke said, describing the assortment. It will include chemises, robes and eye masks.

P.J. Salvage is sold in Nordstrom and Bloomingdale’s among other retailers and Burke said the company sees intimates being distributed through much of the company’s existing channels. He also thinks it can pick up intimates specialty shops with the new offering.

Up next for the company will be P.J. Salvage Kids, which is set to be re-launched for fall 2016.

“The market has come back significantly. There’s a lot more kids’ retailers opening up again so there’s opportunity,” Burke said. “We have been doing kids’ but not in a very big way, unfortunately. We haven’t given the attention to it.”