Patagonia has relocated its SoHo store to Greene Street with an emphasis on environmentalism and community building. 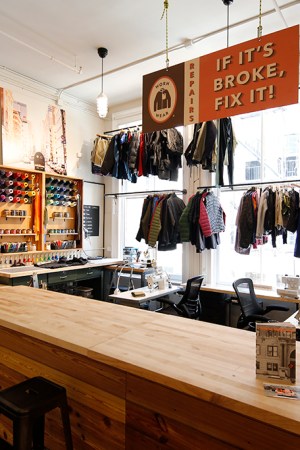 How long does it take to become a real New Yorker is an age-old debate, but Patagonia is banking on 20 years to be a pretty safe bet.

After two decades at 101 Wooster Street, the outdoor brand has relocated two blocks south to a distinctly New York-ified store at 72 Greene Street. Located between Spring and Broome Streets, the French Renaissance-Second Empire style, five-story building is known as “The King of Greene Street,” and was built by architect Isaac Duckworth in 1873.

To celebrate the 20 years that Patagonia has had a foothold in New York City, the company has unveiled a 14,000-square-foot space with community environmentalism in mind and a number of New York touches. With 131 stores globally, Patagonia averages 12 openings annually, with the latest two being Coyhaique, Chile, and Mt. Dobong, South Korea. There’s also a new pop-up store plan set for two 80-foot shipping containers near rock climbing in Ogawayama, Japan.

The company now has four stores in New York, after opening the first one on Wooster Street in 1995. As a sure sign of the brand’s commitment to sustainable design, the new locale has a Worn Wear repair station staffed with workers to repair pre-owned Patagonia products. The setup is an offshoot of the company’s Worn Wear initiative, which fixes tens of thousands of items globally each year to avoid them winding up in landfills. The SoHo store also has a 3,500-square-foot community workspace — its largest one to date — designed for New York City-based environmental nonprofit groups to hold meetings and special events, as the Sierra Club’s new president Aaron Mair recently did, discussing citizen-activated environmentalism and environmental justice. Free weekly yoga classes are being held in the space every Sunday. Patagonia staffers and volunteers are also being encouraged to use the space for work or meetings during store hours.

The company hosted 600 in-store events nationally last year and that figure should jump above 700 in 2015, said vice president of global retail Robert Cohen. “This is not a one-size-fits-all kind of thing.” he said of the retail concept. “The one thing I can guarantee is that we will be inviting the community to come in and do more than just shop.”

In terms of the store’s design, reclaimed long-leaf pine from the historic Domino Sugar Refinery was used for tables, fixtures and beams, and marble and pavers were repurposed from stairs and walkways that were once used in the Museum of Modern Art’s sculpture garden before it was renovated 10 years ago. Patagonia has also installed its own version of art — six hand-stitched and embroidered quilts designed by the Brooklyn-based Haptic Lab that replicate famous climbing routes and topographical maps. The brand’s new Merino Air apparel will be among the actual product.

Shoppers visiting the SoHo store can also pick up a copy of Patagonia’s new 113-page zine titled, Living & Breathing: 20 Years of Patagonia in New York City. In the magazine, designed by Long Island native Scott Massey, readers will find interviews with Patagonia chief executive officer Rose Marcario and climber Lynn Hill Patagonia, whose conquests include The Gunks, as in the abbreviation for Shawangunks, one of the premier climbing areas near New Paltz, N.Y.