A number of other brands have been using models of various shapes and sizes for years.

A look from lingerie and swimwear brand Viva Voluptuous.

Victoria’s Secret may have hired its first plus-size model this month, but the lingerie giant is actually late to the game.

That’s because a number of other innerwear brands have been using models of different shapes and sizes for years. So have retail and fashion companies. Ashley Graham appeared on the cover of Sports Illustrated back in 2016. Plus-size models Hunter McGrady and Tara Lynn have also been featured in the magazine.

Cece Olisa and Chastity Garner Valentine, the duo who cofounded TheCurvyCon expo in 2015, an annual expo for plus-size designers, influencers and shoppers alike, said 10 years ago the selection for plus-size clothing was slim.

“Fast-forward to 2019, and there are like 70, 80 brands that have plus-size options,” Valentine said. “But that’s still a very small amount compared with straight-size fashion.” 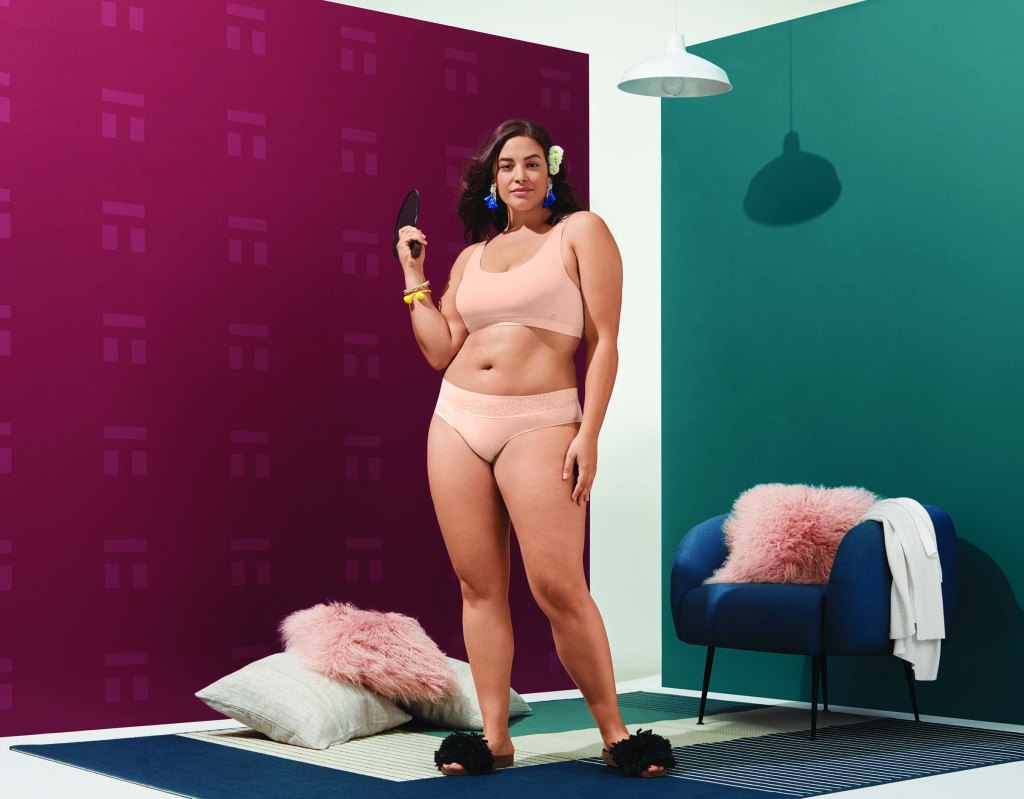 Tommy John is just one of many companies to use plus-size models in its marketing materials.  Courtesy

One thing is clear: shoppers want more options when shopping plus-size. Retailers are responding — and not just traditional plus-size brands, either. Companies like True & Co., MeUndies, Hanky Panky, Figleaves and Tommy John are just some of the brands to feature plus-size models.

Now so has Victoria’s Secret — but it didn’t come easy. The lingerie company’s reluctance to enter the world of plus-size innerwear seems strange. It is, after all, the market-share leader of intimate apparel, offering up bras and panties to women around the globe. But perhaps its image of super-skinny Angels was just what the company was trying to preserve. 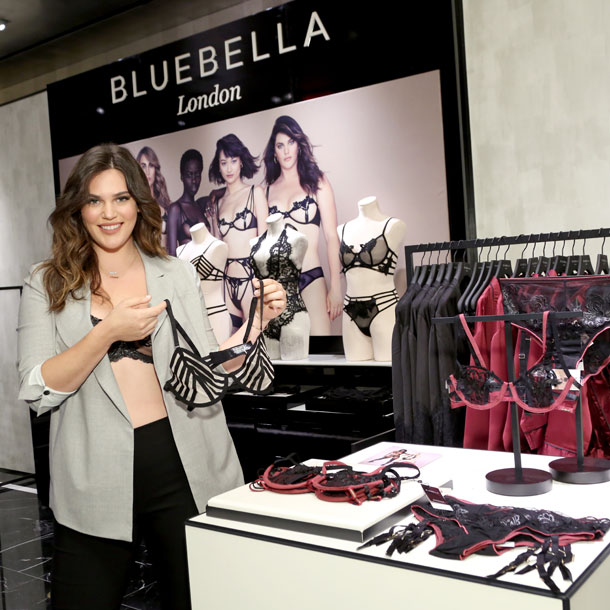 Last fall, Ed Razek, chief marketing officer of Victoria’s Secret’s parent company L Brands Inc., told Vogue magazine that no one had any interest in seeing plus-size or transgender models. But consumers thought otherwise. In fact, the backlash was so severe that the company hired its first transgender model, Valentina Sampaio, in August. (Razek stepped down from this post that same month, after nearly three decades with the company, which included casting the models for the annual fashion show.)

Meanwhile, Victoria’s Secret continues to struggle. Both sales and profits have continued to dwindle since 2017 as a number of start-ups and smaller players move into the space. Many of these have been listening to consumers all along, using models of different sizes and ethnic backgrounds. Victoria’s Secret’s change of heart may have been more of a survival tactic in an era of body positivity.

Here, a few innerwear brands that have long incorporated a diverse array of models.

American Eagle Outfitters’ sister brand Aerie has become a fan favorite in the intimate apparel space. That’s because it was one of the first to feature “real women” — and all their flaws — in its marketing materials.

In 2014, the retailer started the #AerieReal campaign, encouraging women to upload photos of themselves in Aerie products, such as swimsuits and underwear, with the hashtag on social media — sans filters.

In response, Aerie also skipped airbrushing in its advertisements. In addition, it cast four Aerie Role Models to represent the brand: British model Iskra Lawrence, gymnast Aly Raisman, actress Yara Shahidi and singer Rachel Platten. The diverse array of models has since grown to include actress Busy Philipps, activist and actress Jameela Jamil, actress Samira Wiley, gold medal para-snowboarder Brenna Huckaby, YouTuber Molly Burke and artist and poet Cleo Wade. (Platten has since dropped off, but continues to work with the company in other ways.)

“Five years ago, women were constantly being surrounded by unrealistic images of ‘ideal’ beauty, and the idea of a brand going unretouched and using real women in its campaigns was unheard-of within the fashion industry,” said Aerie global brand president Jennifer Foyle. “We felt strongly that women simply didn’t need to be ‘edited.’ And that our customer should see themselves represented and feel celebrated for what makes them real and unique, rather than for their physical attributes.

“The #AerieReal platform wasn’t built on following a trend,” Foyle continued. “AerieReal was born through our dedication of bringing women into the spotlight. It’s this passion that has created momentum for other brands to support the mission of representing real people and promoting self-love and empowerment.”

The formula seems to be working.

Comparable same-store sales at Aerie jumped 16 percent last quarter. That’s on top of a 27 percent surge the same time last year. In June, Robert Madore, chief financial officer and executive vice president of American Eagle Outfitters, predicted that Aerie would likely reach billion-dollar sales status within the next year or 18 months. And while other retailers continue to shutter stores, Aerie has already revealed plans to open between 60 and 70 new stores in the coming year. 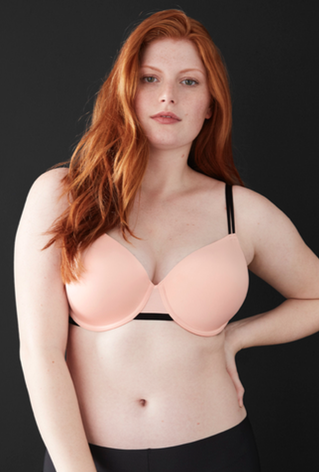 The intimates company, owned by Chico’s FAS, continues to use plus-size models and women of various ages in its marketing materials. In April, when Chico’s launched direct-to-consumer digital brand TellTale, the lingerie brand aimed at Millennials, it did the same thing.

The trend seems to be working for both brands. While the parent company’s stock is down more than 56 percent year-over-year, Soma’s comparable same-store sales growth jumped 10.9 percent last quarter.

“We are in the business of empowering women to feel their best self, at any size and age,” said Mary van Praag, president of the intimate apparel group at Chico’s FAS. “We believe in this new sexy. The sexy that is felt by the wearer, for the wearer through the most comfortable and supportive solutions that portray confidence and beauty.” 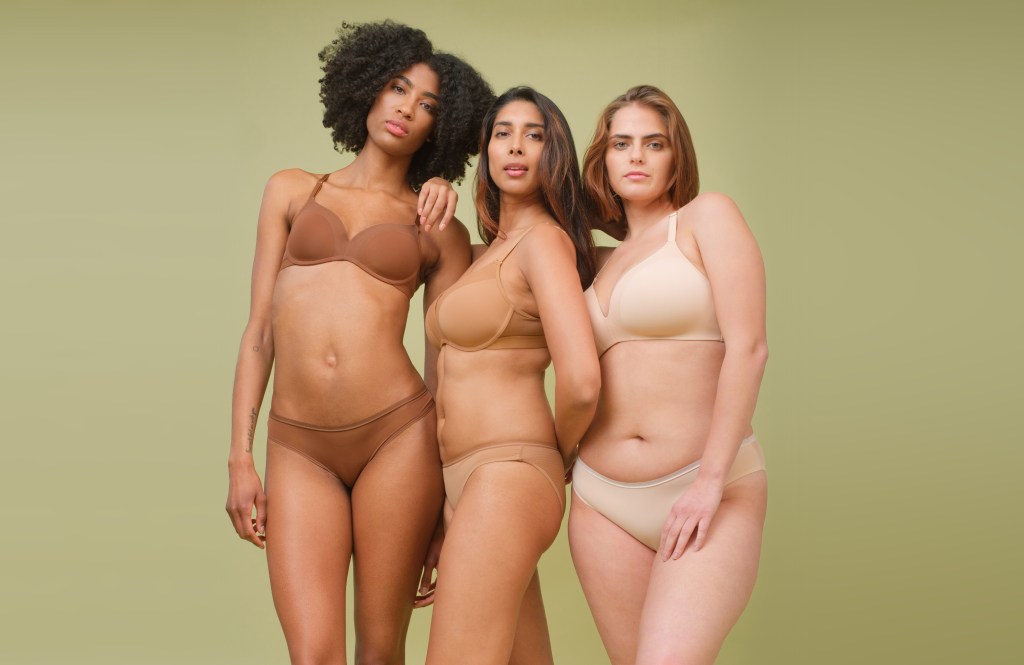 Owned by Japanese-based company Wacoal International Corp., Wacaol America has been selling bras in sizes AA through I since 1985 — and the intimates company’s campaign images prove it.

“It’s all about inclusivity and embracing who [the customer is] and not necessarily looking to change,” said Bob Vitale, who has served as chief executive officer of the company for more than seven years. “It’s kind of ironic in a way that there’s a lot of people getting credit for that online, maybe because it’s the thing of the moment, or they have some sort of fancy gimmick on a web site, or whatever it may be. But we have been steadfast in providing women of all types of body shapes, and all types of sizes with the best-fitting and most comfortable products.”

In addition, Lively, the lingerie start-up that Wacoal acquired in July, also uses models of different shapes and sizes. 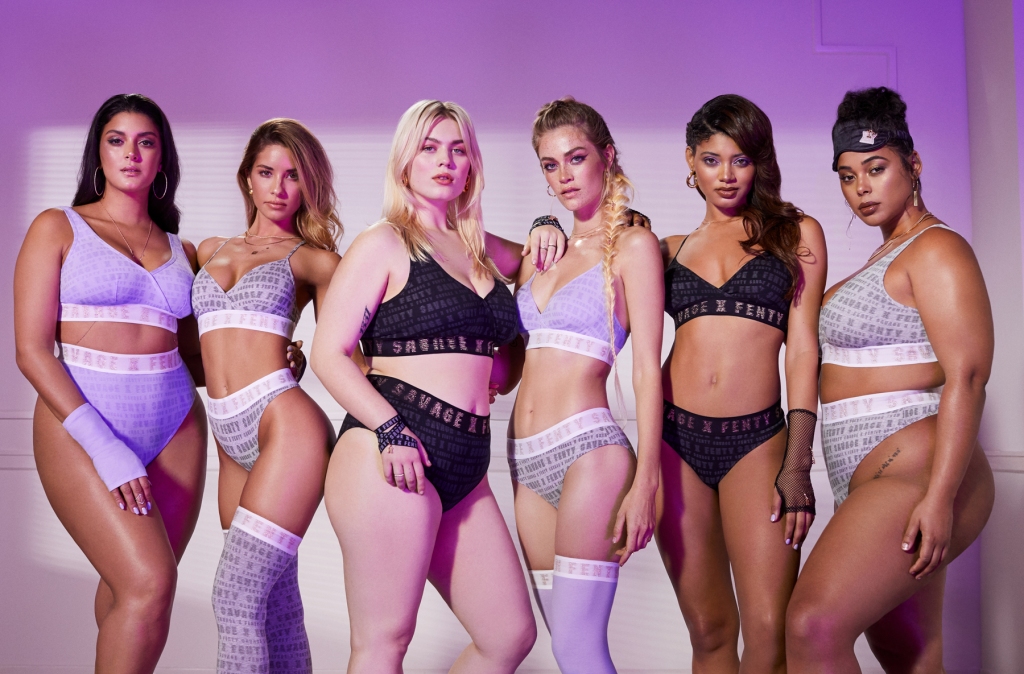 Praise was sprung upon the superstar singer and actress, turned beauty and fashion entrepreneur, when Rihanna used models of all shapes and sizes in her fashion show for lingerie brand Savage x Fenty during last month’s New York Fashion Week.

But she certainly wasn’t the first to do this. In fact, the brand has only been around since 2018. Rihanna, did, however, up the ante. Her fashion show included transgender cast member Laverne Cox and even models with disabilities, including models with prosthetic legs.

“It’s very important that the casting tells the narrative of what the brand stands for. And what we stand for mainly here is inclusivity,” Rihanna said in the behind-the-scenes footage that aired on Amazon Prime. “We’re exploring a lot of different sizes and making women feel that they’re not excluded just because they’re a different size. Every woman deserves to feel sexy.” 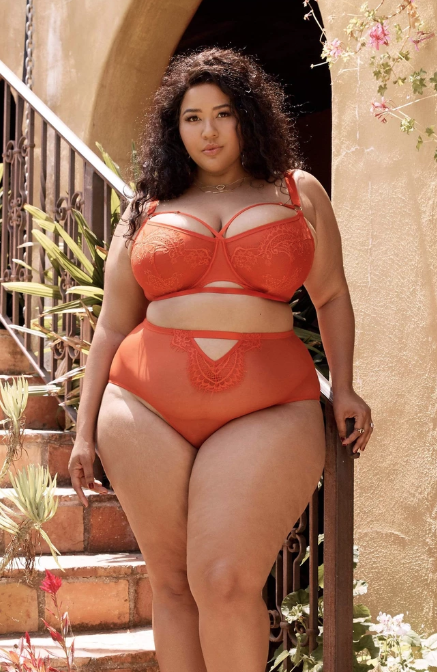 The British-based lingerie brand, which also makes swimwear, has been using plus-size and transgender models long before it was hip to do so.

Campaigns have included plus-size models like Hunter McGrady and Gabi Fresh. In June, transgender actress and model Leyna Bloom was the face of the 15-year anniversary collection, while Dani St. James worked with the company for its Valentine’s Day collection.

“At some point in the future, hopefully, it won’t even be relevant whether they’re trans or not,” Emma Parker, founder and chief executive officer of the company, said earlier this year. “It’ll just be a model.” 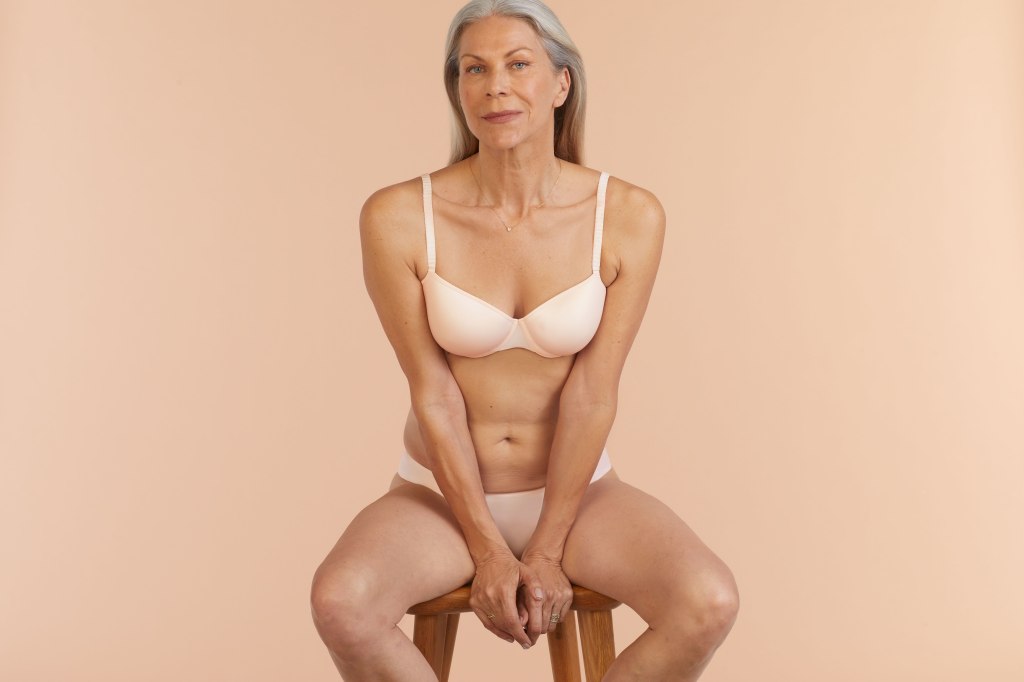 ThirdLove uses models of all shapes, sizes and ages.  Courtesy

The company that bills itself as “the antithesis of Victoria’s Secret” has long made a concerted effort to distance itself from the lingerie queen bee. That includes using a number of different kinds of models, such as older women and women with visible scars.

Cofounder and co-ceo Heidi Zak pointed out that all bras⁠ — regardless of size⁠ — are the same price and that there is no “plus-size section” on the company’s web site, because she wants all shoppers to be treated the same. 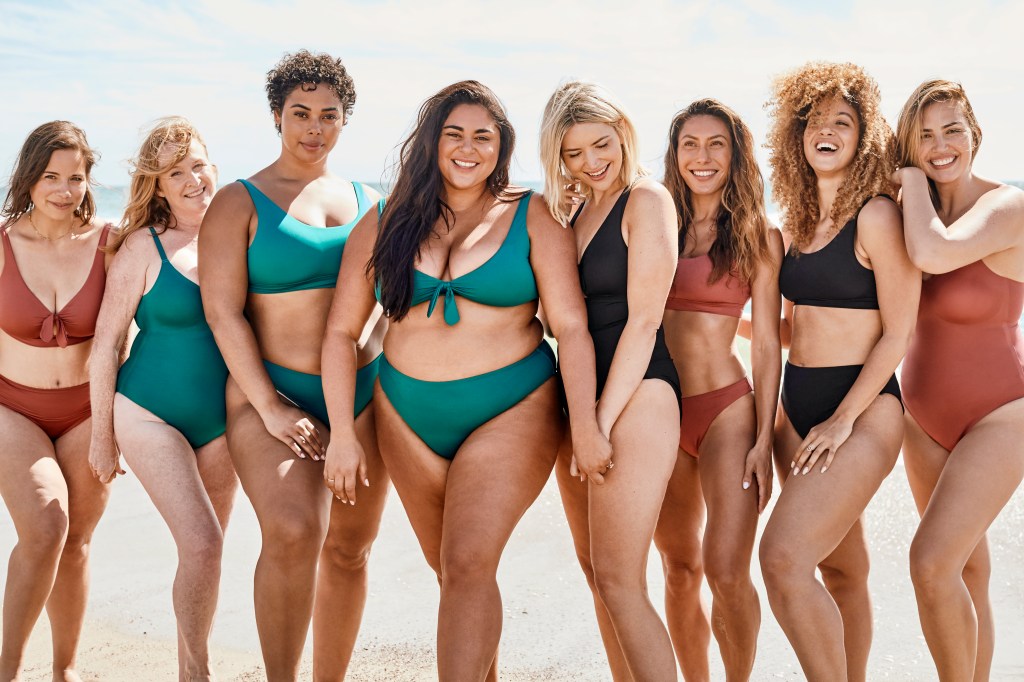 The Toronto-based company, which was born online in 2013, was created with inclusivity in mind.

In the company’s six-year lifespan, collections have included period-proof undies, swimwear and most recently a maternity collection, all with a diverse array of models and a size range that spans up to size 20, or 22 in some cases.

“As a brand we’ve been sort of at the forefront of inclusivity from Day One,” said Joanna Griffiths, founder and ceo of the company. “We’ve almost exclusively used quote-unquote real women in our photo shoots. It empowers women to be unapologetically free and to do more of what they love.” 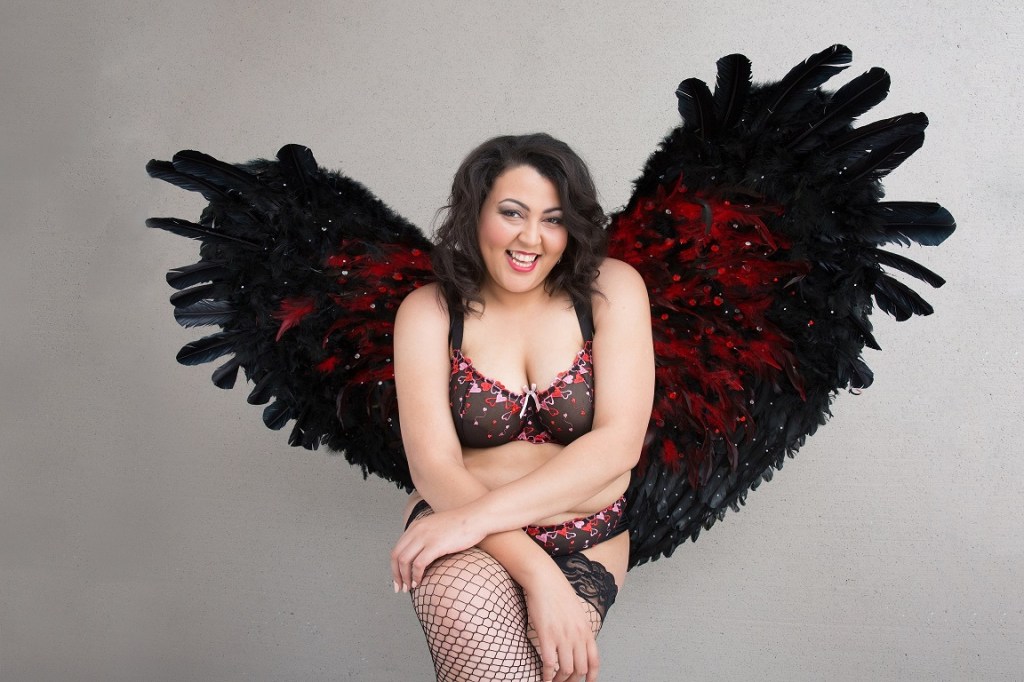 A look from lingerie and swimwear brand Viva Voluptuous.  Courtesy

The British-based online brand, which also has an office in Florida, caters to plus-size women.

“Everything in plus size is all so beige and ugly,” said the company’s president Liz Willis. “We wanted to create something pretty and sexy and beautiful.” 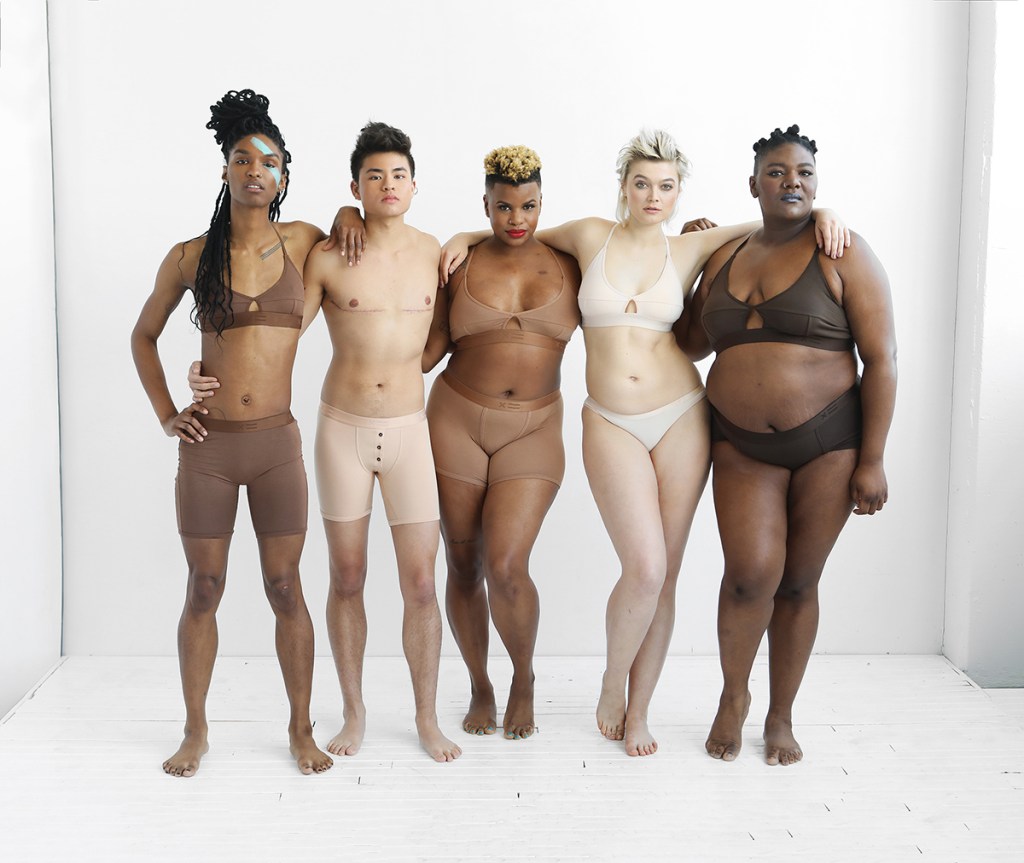 The Seattle-based startup was founded in 2012 by couple Fran Dunaway and her wife Naomi Gonzalez. Neither had any experience in retail, but noticed a hole in the market, particularly in the women’s apparel section. Since then the brand has grown to include gender-neutral intimates, ranging in size from extra small to 4x — all at the same price.

“We are for every body,” Dunaway said. “It’s very important to us as a brand. We don’t want someone to come into our web site and feel ashamed because they have to pay more. Or, because they have a different body style, or body type and they have to go to a special section. That has some subtle shaming and exclusivity. And that is not what the TomboyX brand is about.”

In addition, the digitally native brand, which secured $18 million in series B funding in May, uses a diverse array of models, both in size and ethnic background. The products, regardless of color or style, are meant to be worn by everyone. 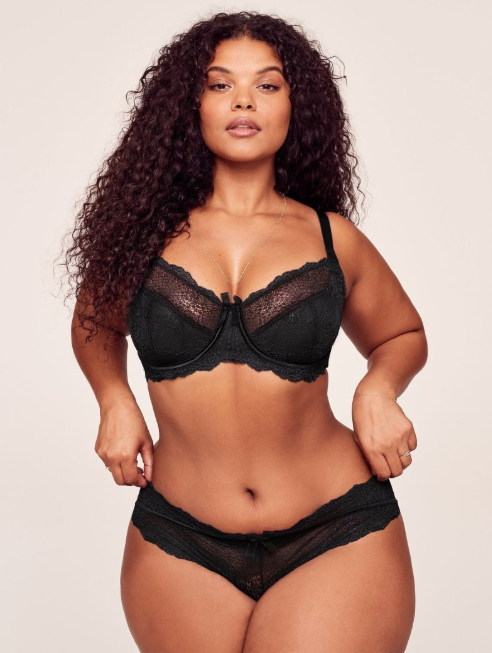 Shoppers browsing the New York-based intimates company’s web site can find models in lingerie and swimwear in sizes petite through plus.

“We design a lot of different products, but we don’t want to be attached to some kind of sexy-only image,” said Romain Loit, chief operating officer of Adore Me. “There are different types of beauty and we need to sell to that. It’s more about inclusivity. I feel like we are lingerie for everybody.”

The company began online in 2012, but has since opened a handful of stores.

Loit said the company is committed to changing the innerwear industry.

“I think our difference is that we go one step further than the idea that all beauty is equal,” he said. “For us, what we want to convey is really the idea of everyday inner confidence.”