Legwear is having a spring awakening. 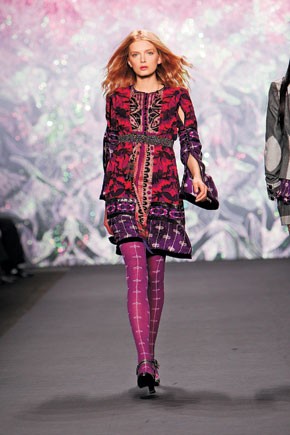 Legwear is having a spring awakening.

With its consistent presence on February’s runways — in styles such as sheer, sparkled Lurex and strong blocks of color — the category shows no signs of slowing even while moving into its traditional slow season.

Although first delivery spring orders have hit stores, the opaque black tight from fall is still selling strongly. Retailers said customers are buying a thick black tight now to last through the rest of winter.

“We’re doing a lot of black basics from Wolford right now,” said Ed Burstell, senior vice president and general merchandise manager of jewelry and accessories at Bergdorf Goodman. “But I think that will probably change as soon as the weather turns. I am expecting a move into something a little more sheer.”

Ed Miccinati, design director for StockinGirl, a hosiery firm based in Stamford, Conn., has had to reorder many of his basic fall pieces.

“We recently spoke to a lot of our contemporary retailers and there are a surprising amount of people at their stores still buying” fall-winter merchandise, Miccinati said. “We booked more legwarmers, wool tights and wool socks for immediate delivery in February and March. I wasn’t expecting that. The product shipped this month. We did close to $100,000 in immediate cold-weather goods. So that was surprising.”

For early spring, transitional items such as leggings and over-the-knee socks have been big sellers.

“Leggings are huge and I keep expecting them to die,” said Stacey Pecor, owner of the four Manhattan-based Olive & Bette’s stores. “And it was something where I said, ‘been there, done that, I won’t wear them again,’ but I consistently buy a new pair every season. I think we made them a staple requirement. My legwear and legging business is up 22 percent over last year for spring. People can’t live without their leggings. Especially for spring, I can’t see anything replacing the legging. Rebecca Beeson made an amazing pair — it sucks you in and you just feel great in them.”

Vendors are optimistic that the momentum will continue for fall, with novelty trends reaching new heights. Even the sheer category, which was deemed out of fashion in recent years, could be rediscovered because of its exposure at fall shows such as Chanel, Hervé Léger and Phillip Lim.

“Sheer is an interesting thing,” Miccinati said. “Every single store is interested in sheer pantyhose and stockings again. It’s 15 and 30 denier, and it’s ultrasheer and it’s semi­sheer, mostly in black, gray and nude. We’re starting to see it on the streets again, but not on old ladies. We see it going up to June and skipping the hot summer months until the end of August.”

Socks are again proving to be one of the strongest spring performers. Designers are playing around in the category, showing feminine ankle socks in cotton and nylon that retailers are pairing with high heels or ballerina flats.

Tony Taylor, creative director of the Brooklyn-based Look From London, is doing striped anklets in yellow and black, as well as knee-high socks in florals and Lurex fishnet.

“Socks are really hot for us right now,” Taylor said. “Our green and gold colors are very popular. Yellow and green seem to be the two big colors for us, as well as fuchsia pink. A lot of people are doing socks with flats and some people will dress them up for a night out clubbing. They look really cute with pumps and short skirts.”

“The selling is going very strong and the crew silhouette is number one, which has been great,” said Susan Reese, vice president at Soxland, a New York-based manufacturer. “Again, it’s a soft, comfortable yarn that wicks and is eco-friendly. The packaging calls out the properties of the yarn and the marketing helps that out.”