Demand declines as consumers continue to hunker down at home and events are canceled.

With so many events canceled or postponed in the near term because of the coronavirus, the demand for shapewear will likely shrink.

Spring marks the arrival of many things. Included in that list are weddings, graduation ceremonies, galas, museum openings and red carpet events. But as the nation’s need for social distancing persists, these occasions have been recast as virtual events, postponed or altogether canceled.

That means fashion needs have shifted, too. And the demand for shapewear has shrunk right along with it.

“Pre-COVID, I was predicting an uptick in shapewear based on some of the things that digital native brands [are doing],” said Todd Mick, executive director of the fashion group at the NPD Group. “But now, I’m not sure it’s going to grow.”

In fact, up until recently, shapewear was having a moment. After years of relatively no innovation — and Spanx continuing its reign as the market share leader — new players began popping up, grabbing the attention of consumers and a slice of the market.

Most notably was Kim Kardashian West’s launch of Skims Solutionswear last September. The shapewear assortment offered a fix to familiar fashion fumbles, such as red carpet mishaps, visible bra straps or unsightly tummy rolls — solutions to pesky problems that even the most glamorous fashionistas face, like the Kardashians.

The demand was evident. Skims were rumored to sell out within minutes of launching online, with fans inquiring on social media how they could snag a pair of their own. When Kardashian West made an appearance at New York City’s Nordstrom earlier this year, part of a new partnership with the department store, thousands of fans lined up hours before the store opened to get a glimpse of the star — and her shapewear.

But it’s not just the reality star who’s squeezing into the shapewear space. Brands such as Yummie, Smart & Sexy, HanesBrands’ Bali and Maidenform, Commando and even luxury line La Perla have all expanded their assortment of shapewear in the last year. Last fall, Skinnygirl founder Bethenny Frankel said her brand’s shapewear sales were up 200 percent in the last year. In January, lingerie giant Victoria’s Secret started selling shapewear on its web site, a partnership with Colombian intimates brand Leonisa.

That explains why U.S. sales of women’s shapewear grew 2 percent to $529 million in the 12 months ending in November, according to NPD’s Consumer Tracking service.

The category was set to thrive even further amid wedding, graduation and awards seasons. But wardrobe malfunctions are easier to hide sans shapewear over video sessions.

And while demand for shapewear has grown in the last year — Shapewear replenishment rates, or how quickly retailers are securing new orders of the same styles after it sells out, have increased 4 percent in the last year. And the number of shapewear styles selling out in the past month has also increased, 12 percent year-over-year, according to Edited — it’s likely won’t offset the losses that are soon to take shape from the coronavirus shutdown.

U.S. arrivals of shapewear declined 42 percent in April 2020, compared with April 2019, signaling sales will presumably also take a nosedive in coming months. Some firms have already begun citing sales declines. Intimates brand Yummie, which sells bras and loungewear, in addition to shapewear, said sales of firm shaping products were down 40 percent in the last 30 days.

“Shapewear is synonymous with occasion wear and with the current social distancing measures, discounting [of shapewear brands] has also increased as retailers try to drive sales during this difficult time,” said Edited market analyst Kayla Marci.

Mick added that some consumers may get used to working from home, so much so that they won’t feel the need to stuff themselves back into more tailored silhouettes — even when out in public.

“Consumers will be a little less comfortable and more reluctant about wearing constricting shapewear, because they’re so comfort-centric,” Mick said.

In fact, COVID-19 has ushered in a new normal. One that has created a cohort of homebodies who are cozying up in place. Hence the sales uptick in categories like loungewear, sleepwear, intimates and even activewear.

Figleaves, Commando, Shapermint, Yummie and Lively all reported record growth in wireless bras last month. Not only that, but Lively’s loungewear category grew 1,000 percent in March, with sales continuing to trend upward in April. 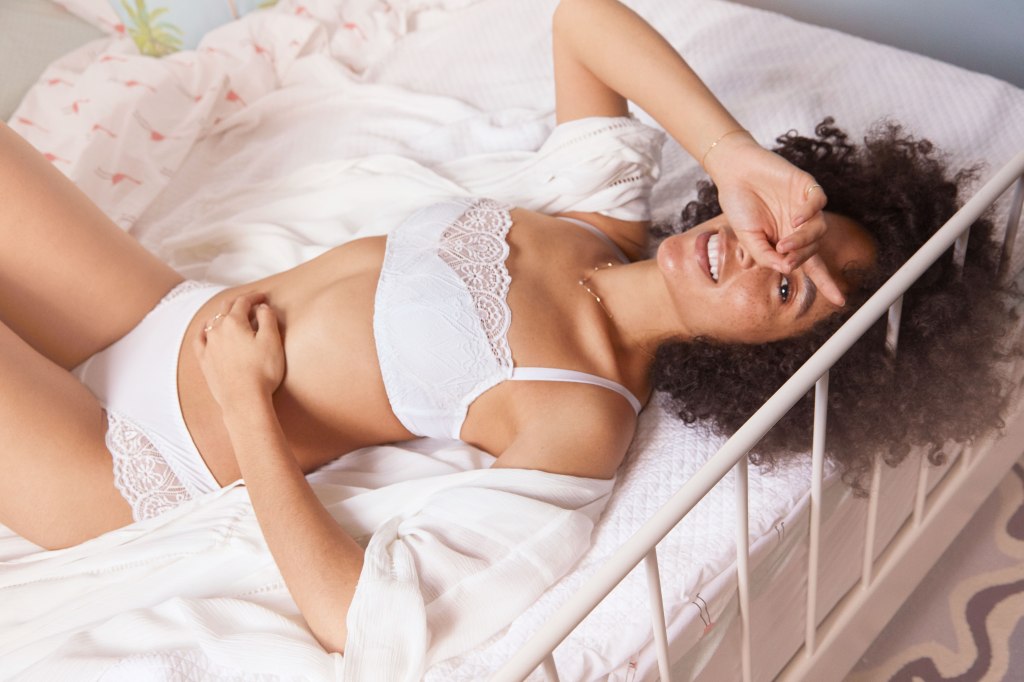 Consumers continue to get cozy at home.  Courtesy Adore Me

Meanwhile, no one knows exactly when the social distancing measures around the country will be lifted. (President Trump predicted some communities will be able to get back to work around May 1, while New York Gov. Andrew Cuomo told residents the state’s “pause” will stay in effect until at least May 15.)

That could take months, or even years. Some consumers might opt out of the events all together, having gotten used entertaining at home.

Either way, Storch agreed with Mick that some behaviors will likely stick even after the pandemic is over — like the casualization trend.

“We aren’t going to see any return to the tailored looks,” he said. “Quite frankly, people like being casual.”

The opportunity then lies in shapewear that can be worn as both innerwear and outerwear, or even daywear, said Caroline Levy Limpert, head of digital brands division and chief marketing officer for Gelmart International, an intimates apparel manufacturer.

“It’s more about comfort, more about the base layers. There may still be a bodysuit that people will wear, or maybe a camisole,” Levy Limpert said. “There are some items that are more daywear, offering solutions. Maybe the solution is work from home. Maybe the solution is over a Zoom conference call, or doing a Zoom cocktail hour. We see those styles more as we switch from business casual to business comfortable. It’s a solution, a different solutionwear. No longer is the solutionwear that it was created for an event or going out for a red carpet.

“But the true solutionwear that is slimming, or instead of that workout, or for dressing, those are — since people aren’t going out — going to have more difficulty selling,” Levy Limpert said.