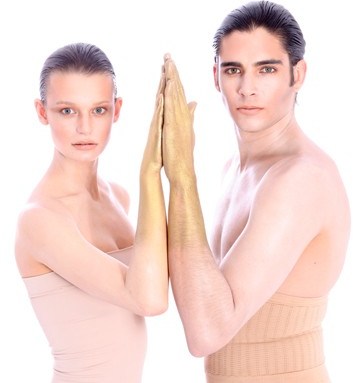 FIGURE IT OUT
It’s OK for women to talk about their shapewear.

From the red carpet to Oprah’s couch, Hollywood stars from Queen Latifah to Maria Bello are proudly talking about what they’re wearing under their clothes to help smooth out their trouble spots. At last year’s Oscars, for example, Latifah told reporters about more than her dress, announcing, “I’m wearing a Curvation [bra] and Spanx.”

Gwen Widell, executive vice president of merchandising at Wacoal America Inc., says, “I was watching the Golden Globes, and celebrities were all talking about wearing Spanx, or a longline bra. That wasn’t acceptable even a year ago. It’s working for shapewear because technological advances are allowing us to eliminate layers and remove bulk.”

Following the Spanx phenomenon, which started in 2000, and spread to Sculptz in 2003 and Cass & Co. and Sassybax in 2007, the segment has exploded in recent years. Oprah was a big factor in getting Spanx on the map in 2000 when she told viewers, “I’ve given up pantyhose. You get smoothness all the way down. You don’t have the panty line…OK….I should own some stock.” High-end players like Donna Karan Intimates have joined the field, as have established brands such as Wacoal, Playtex, Bali, Warners, Flexees, Jockey, Hanes, Body Wrap, Va Bien, Rago and QT.

Joyce Baran, a 30-year veteran of shapewear design and founder of product development firm JBD LLC, says, “People used to say shapewear was unmentionable. Now it’s bragable. You see it being talked about on the red carpet. It’s nothing to be ashamed of.” Baran has helped develop the Secret Weapons and Du-Mi brands.

In the past year, more than a dozen new shapewear brands have entered the field. Several are entrepreneurial firms headed by young designers who maintain they couldn’t find a shaper to properly address their figure problems — from eliminating belly bulge to smoothing out lines — so they decided to make their own.

“I designed the product for myself after my two babies were born,” says Heather Thomson, designer of Yummie Tummie. “There were all of these shapewear products out there, but they didn’t work. I wanted a beautiful control tank top to flatten my muffin top, and I wanted to be comfortable and look hip and cool. So I designed an item with two fabrics sewn together: 50-singles cotton and polyester-tricot. It can be worn under a jacket, and when the jacket is off, it looks very corseted.”

Staci Berner, a cosmetician, created Shapeez, a line of full-busted bras with extra coverage across the back to smooth bulges under knits and tight-fitting apparel. “There were a lot of tops I couldn’t wear, and I went on a shopping search and found nothing with the smoothing properties I wanted,” she says. “I had this stretchy fabric and took the components from a bra and made myself a great bra that gave breast support and no back bulges. In reality, if you can’t find it, make it.”

Designers have a range of cutting-edge fabrics and applications at their disposal, with seamless and heatsealed technologies that offer feather light, breathable control items that move with the body and feel like a second skin. Bulging seams and boning that can produce unnatural contours and thick nylon or power mesh layers that move unflattering inches to other parts of the body are gone.

Among the innovative ideas are allover seamless Santoni knits that fit like a glove — a technology that has advanced over the past decade with a variety of textures and fashion prints that are now used industrywide from Target private label to luxe Natori fare. Other advancements include knit-in engineered control for problem areas like the tummy and thighs, lazer-cut edges that leave no lines, and dotted silicone compression insets and laminated control panels, which give extra control as well as a retro look.

The newest part of the equation is Invista’s Lycra 2.0 technology, which is aimed primarily at shapewear and provides heat-sealed banded hems, seams and bands with stretch and recovery for a sleek, all-day fit. There’s also a new generation of buttery-soft microfibers ranging from fabric and fibers made by Nylstar’s Italian brand Meryl, to Hyosung’s Creora brand of spandex and microfiber. But not all innovation centers around support itself. For example, Invista’s White Lycra, launched last year, doesn’t yellow after washings, while Black Lycra, introduced in 2007, imparts black fabrics with a purer black while enhancing bright colors. Lycra freshFX, meanwhile, wicks away moisture for a fresh, dry feeling.

Sizing up the shapewear phenomenon, Jessica Alba confessed in 2005 that in order to fit into her skin-tight blue suit in the motion picture “Fantastic Four,” she needed a shaper to look good at all times. “I have to hold my stomach in… it’s really not forgiving at all and if it’s that time of month, whatever, it shows everything. I wear this stuff called Spanx. I appreciate that.”
— Karyn Monget

Historically, women have been subjected to all types of bindings to optimize their appearance. Now, growing numbers of men are beginning to realize the gym isn’t the only way to a better physique — or at least the appearance of one.
“Men are becoming aware of what it takes to put their best foot forward,” says Gavin Jones, managing director at Equmen, an Australia-based men’s underwear label. “And they’re willing to invest in products that help them do it.”

Based on the sales growth in male shapers, it looks like manufacturers of men’s intimates are getting a nice piece of that pie. “We launched our male collection this past year after we kept getting requests from men for our female body shapers,” says Janette Chakeres, president of Discovery Direct Inc., which distributes GearCom. “Since men’s physiology is very different, we wanted to give them some healthy options.”

Though men’s everyday or lifestyle shapers are designed for cosmetic purposes, they are heavily influenced by post-op compression clothing and wrap garments used in physical therapy to improve circulation and support muscles. In fact, a lot of shapewear manufacturers have origins, or at least a solid business, in medical apparel. “We still produce several orthopedic products including some specialty compression items like tights and girdles,” says Chakeres. As shapers have grown in popularity with men, the market has opened up for more design-based items, but mixing style with function is key. “A lot of our ideas come from customers who’ve had cosmetic or corrective surgeries,” says Alex Hernandez, vice president of Go Softwear. “They’ll use our products for medicinal purposes and come back with some great suggestions that ultimately improve the garment’s look and fit.”

Augmentation is also popular in the market, although product categories like body trimmers and waist eliminators scream of cinching things in. A growing number of products are designed to help men add a few carats to the family jewels or get the derrière extraordinaire they never had. “Padded underwear, back or front, are always best-selling items for us,” says Hernandez. Lower body not the issue? No problem. Beyond underwear, manufacturers are producing tanks and Ts with pecs and abs built right in. While the target shapewear customer used to be a middle-aged man wanting to fit into contemporary fashion’s trimmer silhouettes, padded undergarments have opened the doorway to guys in good shape who just want to kick their look up a notch. “Right now, about 60 percent of our business is in shape trimmers,” says Robert Grey, director of merchandising and acting president of Undergear. “But the 40 percent taken up by padded pieces is steadily growing and there’s certainly room for us to expand offerings.”

At this rate, who knows what the future will bring — perhaps long johns with calf and thigh pads can’t be too far off. One thing is certain: While it’s true  the clothes don’t make the man, the newest shapers come pretty close.
— Court Williams

Sculpture Class
Shapewear has traveled a long road From the inflexible and tortuous whalebone and buffalo-horn corsetry of yesteryear to the soft, allover seamless briefs with high-tech knit-in control prevalent today.

Shapewear, no matter how frilly, silly or utilitarian, has evolved through the decades in a wide array of styles, ranging from the ridiculous to the sublime. The woman of the Gay 1890s coveted the hourglass figure created by underpinnings such as Rust-Proof Corsets by Warner’s.

The quest for curves in the Roaring Twenties flatlined when small chests were in style and the fashionable flapper wore a bandeau to compress a generous bosom.

The demand for curvaceous women resurfaced in the Thirties, thanks to Hollywood sirens such as Greta Garbo and Jean Harlow. But corsetry returned in uncomfortable rubber and cloth renditions that featured little breathability, creating a personal sauna for the wearer.

Rosie the Riveter may have worn overalls on the World War II assembly line, but by night she wore corsetry that bridged the gap between the lace-up corselets of the 1890s and true lingerie fare in silk, brocade and lace.

The Fifties not only brought a baby boom, but also ushered in a new generation of panty girdles, many of which featured high-waist treatments and could be worn with coordinating bullet bras.

An axiom of the Sixties, “Burn, baby, burn,” appropriately describes the discomfort foundations makers felt as feminists torched their bras. But many women still needed to tuck in their tummies and thighs, and longline girdles with attachable garters remained popular until Lycra spandex pantyhose became common.

Disco Fever ruled in the Seventies, and the girdle business offered up a range of whimsical prints and lighter-weight nylon and Lycra styles to wear with HotPants and skin-tight Disco pants.

Girdles began crossing over into what we know as shapewear in the Eighties in a variety of styles and support levels, including all-in-one body briefers with built-in push-up bras.

A major influence in the Nineties was the introduction of Donna Karan Intimates and the designer’s love of shapewear in both intimates and legwear. Hipslip, a control slip created by Bodyslimmers by Nancy Ganz became a household name in fashion circles, and Ganz created a slew of memorable names for her shapers like The Belly Buster and The Butt Booster.

The new Millennium kicked off with the Spanx craze and comfortable, seamless shapewear for all occasions now rules the day.
— K.M.