Good old-fashioned romance will be the underlying theme at the upcoming Salon International de la Lingerie, to be held at the Porte de Versailles here Jan.... 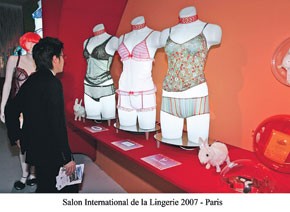 PARIS — Good old-fashioned romance will be the underlying theme at the upcoming Salon International de la Lingerie, to be held at the Porte de Versailles here Jan. 24 to 27 — or as the event’s organizer Eurovet puts it, “Love Is in the Fair.”

The trade show’s annual Ultra Lingerie fashion show, geared this time to the theme of “ultramodernity,” will kick-start the event on opening day. Environmentally friendly production will be one of the major themes addressed at the fair, notably in the Interselection fabrics section that will host a number of conferences on the topic.

“We’ll also be indicating those manufacturers who produce cleanly and who propose sustainable development,” said an SIL spokeswoman, adding that an adjoining organic-focused cafe and bookstore will also be set up for visitors.

Spicy Garden, the young designer area, will also showcase a crop of eco-friendly brands, including G=9.8, Eco-Boudoir and Peau-Ethique.

“A survey conducted among exhibitors at last year’s session showed that [eco-friendly is] still not very developed in the innerwear sector,” said Cecile Vivier, SIL’s sales manager. “Several young brands are leading the way, as it differentiates them from competition.”

Afterwear, Britta Ushkamp, Letters of Marque, Senerissima and Willow will be among new arrivals to the section.

Proposing a more global take on the category, a constellation of innerwear accoutrements will also be on offer at the show, such as body jewelry by Inés de Castilla, and storage lingerie pockets by Delica Tella. Kha Home and God Created Woman will figure among brands peddling at-homeware items complementary to the innerwear sector, such as bed linens and satin pillows.

The fair’s expanded section, Morphing-wear, will showcase brands specializing in maternity, comfort-oriented and body-shaping innerwear, as well as post-surgery lingerie. Examples will include U.S. brands Braza Bra, which produces bra padding and antitranspiration patches, and Rago Shapewear, as well as the French newcomer, Oémée, which specializes in feminine medical lingerie.

Tapping into growing demand for specialized innerwear, a number of such brands will also be joining the fair, including Elixir, Lejaby’s nascent brand geared to larger sizes, and U.S. newcomer Kumi Kookoon, which will present a range of innerwear for all the family.

Newcomers to the Interfilière section will include Fried Freres, a French specialist in decorative beads and buttons, and Chinese lace manufacturer Decorine. A series of daily conferences will feature:

– Emerging Markets: Speakers will discuss sales and distribution opportunities in emerging markets such as Russia and China, as well as potential areas for development within those sectors.