Spanx is getting into the bra business with the launch of Bra-llelujah. 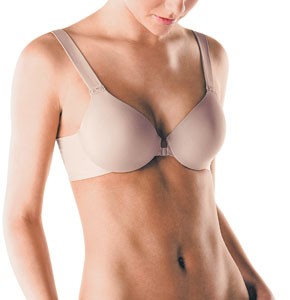 ATLANTA — Spanx is getting into the bra business with the launch of Bra-llelujah.

Known for its shapewear and footless pantyhose, the Atlanta-based company has launched two bra styles in its spring collection.

Rendered in the same nylon stretch hosiery fabric as the signature control pantyhose, one style features front-closure molded cups that are elastic-free, with self-adjusting straps. The straps are designed to create smooth lines under clothes and flatten back fat. Another bra features all-hosiery fabric with no closures and natural cups.

Spanx has offered packaged sports bras before, but Bra-llelujah, which will retail for $62, is the first to be sold on hangers. Spanx also launched a body-shaping camisole with a longer torso to its collection for spring, consisting of eight camisoles, in response to consumers’ demands for a garment that won’t ride up, said a spokeswoman.

The bras began selling on Feb. 15 at department stores such as Dillard’s, Nordstrom, Neiman Marcus and Belk, as well as 3,000 specialty stores nationwide.

A spokeswoman for Spanx, said, “We are seeing sell-through rates of 49 percent to 63 percent in our high-end department stores. Thousands were presold on the spanx.com Web site.”

The company launched the bra styles at a “Get Your Spanx On” suite for media and celebrities at the Bryant Park Hotel during last month’s New York Fashion Week.

“We feel that the brand (launched by founder Sara Blakely in 2000) is coming into its own, but we’re still just Atlanta women trying to solve issues with undergarments,” said the spokeswoman.