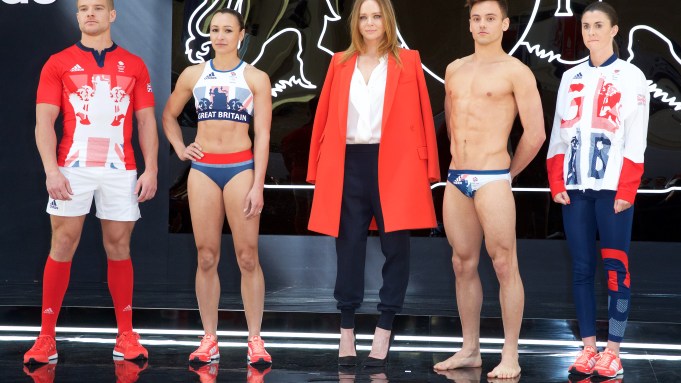 LONDON — “Go ahead, get your six-pack out,” said Stella McCartney to Tom Daley, the English diver who’ll be taking part in the Rio de Janeiro Olympics in August, as she unveiled the official sports kit she created for the British team.

McCartney had Daley — and other athletes — modeling her latest creations for Adidas, including clothing for the sports arena, the winners’ podium, and the Olympic village.

This is the second time that McCartney has worked with Adidas on the Olympians’ uniforms, and this year there are some major changes, including a new coat of arms meant to reflect the athletes’ British heritage and teamwork, and new technical fabrics that are 10 percent lighter for speedier performances.

McCartney and members of the British Olympic and Paralympic teams gathered Wednesday at Seymour Leisure Centre, a sleek Thirties building with art deco features, to show off the new collection.

McCartney said the range of Adidas fabrics and materials was narrower than she’s used to working with, but she likes operating outside her comfort zone and put a fashion spin on everything from tracksuit bottoms and jackets to men’s racer swimsuits.

“There are perforated nylon jackets, and lots of Neoprene and stretch — which I usually don’t have in my collections. There are double zips on the jackets, metal eyelets and tone-on-tone embroideries of the new coat of arms on sweatshirts,” said McCartney, who also added jaunty GB varsity-style letters to the sleeves of jackets and created elegant, diaphanous tone-on-tone whites for tennis players.

McCartney also created performance wear for golfers, reflecting the reentry of the sport into the Olympics this year, although that was not on display on Wednesday.

The designer played with the scale and proportions of the red and blue GB logo, the British flag and the coat of arms, stretching them, shrinking them or breaking them apart, depending on the type of sport involved and what part of the clothing will be facing the cameras during the competitions. She said she and the Adidas team “printed on a million different textures” during the two-year design process.

She also said she worked closely on the coat of arms, with elements that symbolize different parts of the British Isles, such as the rose, laurel leaf, flax and lion “to create a strong identity and make the athletes feel like a team.”

McCartney said she was proud to leave the teams with something as lasting as an official crest, which was designed over an 18-month period by Clive Cheesman, an officer of arms at the College of Arms in London.

“I love the fact that it will live on beyond the 2016 Games,” said the designer.

Adidas added that it is working with “a new generation of lightweight, breathable synthetic fabric” known as Adizero, which is 10 percent lighter than in 2012, helping athletes go further and faster.

The sporting kit is also free from PVC and leather, and McCartney said there are also a lot of woven materials, which create less waste during the production process.

The different garments also feature Adidas Clima technology, and specially developed materials that conduct heat and sweat away from the body to ensure athletes stay dry and comfortable.

There is also Climachill technology for track and field apparel, cycling jerseys and tennis T-shirts that cool the body with aluminum silver dots bonded into the fabric at the body’s key heat zones. Athletes said would be crucial to have in the hot and humid Rio climate.

Footwear, meanwhile, features Adidas Boost technology, which also was a big driver behind sneaker sales in the first quarter. Earlier in the day, Adidas said net income in the first quarter spiked 38 percent on a sales gain of 22 percent, due partly to the cutting-edge sneaker design.

As a result, the German sporting goods firm raised its guidance for 2016. It said net income from continuing operations should increase between 15 percent and 18 percent, up from previous guidance of 10-12 percent.

The athletes themselves said they’re eager to get moving in their new duds: Daley said that in a sport like diving, which is measured in points, it never hurts to look attractive in front of the judges. “If you look good they’ll say to themselves ‘He’s the real deal — and they’ll like you.’”

He said the tracksuits and outerwear are all very fitted “making athletes look like athletes,” when they stand on the podium. Jessica Ennis-Hill, the British track and field athlete and Olympic medalist, said during the unveiling, “if I feel like I look amazing, then I’ll perform amazingly as well.”

She added that the coat of arms “makes us feel a huge sense of pride in coming together as a team, which only happens once every four years.”

Adidas Team GB replica apparel and fan-wear will be available from May 1 online at Adidas and at sports retailers.