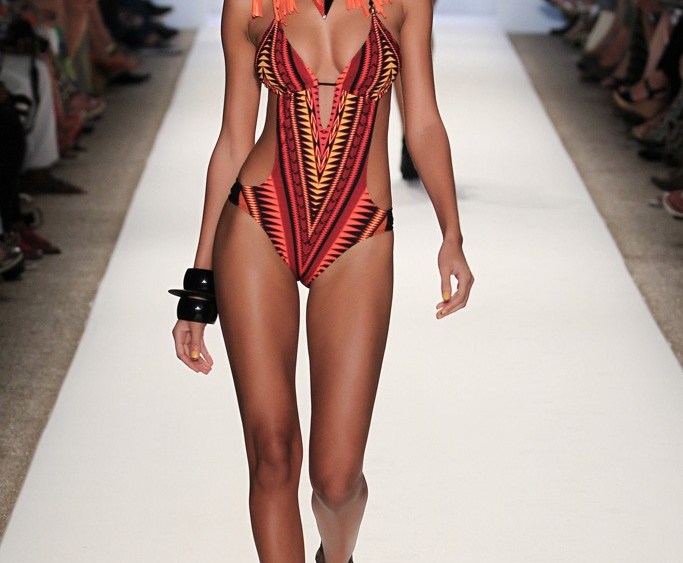 When it comes to swim, you’d better dive in.

That was one of the main messages at swim week in Miami, where four-day trade shows including Swimwear Association of Florida’s 30th-anniversary SwimShow in the Miami Beach Convention Center, and Salon Allure at the W Hotel South Beach, wrapped up.

More than treading water in the recession, the category has inspired brands of all origins, from eyewear to boat shoes, to get in the game. NPD Group research puts swimwear sales at more than $4.1 billion in 2011. Marshal Cohen, chief industry analyst for NPD, reports there was a 5 percent increase in swimwear sales from 2011 to 2012. Laundry by Shelli Segal, Sperry Top-Sider, Oakley, BCBG Max Azria Group, Adidas and Paul Frank, among others, launched swim collections for 2013.

Laundry translated its signature ready-to-wear for suits, such as a ruched, one-shoulder dress with side beading reborn as a one-piece retailing for $128. Grace Fooden, senior vice president of merchandising and design for fashion brands at Perry Ellis International, which owns Laundry, expected at least two-thirds of buyers who saw the line at SwimShow to place orders.

“A small test batch with items like an eyelet lace cover-up for $178 met no price resistance,” she said.

Seafaring Sperry offered just about every rendition of a rope and anchor under the sun. The motifs appear as prints, ties and charms, along with the boat shoe’s signatures, like grommets and zigzag stitching, for men’s and women’s swimwear and cover-ups retailing from $70 to $120. Suits mimic authentic sails and Breton stripes, albeit glamorized with clear sequins, while knits are embellished with gold boat-hook buckles and anchors, as on a retro navy and white sweater and shorts set.

SwimShow will generate more than 100 accounts, according to Howie Greller, vice president of merchandising for licensee Manhattan Beachwear, who reports Sperry’s timing couldn’t be better.
“Preppy’s trending again, they’re sponsoring the U.S. Olympic Sailing Team, and their shoes are such a fashion statement that they’re carried at designer stores like Jeffrey and Colette, and everyone’s knocking them off,” he said.

Many established brands brought special or exclusive product to the show. As part of a 2013 re-branding campaign based on its innovative heritage, Jantzen presented the North American swimwear debut of Lycra Beauty, a chlorine-resistant fabric with Xtra Life Lycra fiber. A number of retailers cited revived style at Gottex since the brand was sold by the Gottliebs, and Anne Cole celebrated its 30th anniversary with a new Web site and reissued hits like the Lingerie Maillot, circa 1982.

“We worked with the original patternmakers to get it just right,” said designer Anna Kenney, who kept its high-cut leg and cover stitching but lowered the scoop back.

“It’s better not to please everyone rather than be too scattered,” he said, while reviewing orders for 25 lines at SwimShow, though he placed 75 percent of his budget in June. “I have a fashion customer, so it can’t look the same as everything else.”

The brands at Salon Allure took this mission to heart. Haeckel Haus, a new swim collection based in San Francisco and France, where it’s manufactured, features ornate prints inspired by antique illustrations, photos and objects. A one-piece halter with wrap tie waist in a gold and black lifelike shell print retails for $250. Other prints denote the cabinet of curiosities and a glass-bottom boat’s kaleidoscope view.

The brand is named after the German scientist and renaissance man Ernst Haeckel, according to cofounder and former Getty photographer Britt Erlanson.

Retailers report budgets remained flat or dipped. Consumer confidence hasn’t brightened at Beach Scene’s two stores in Panama City, Fla., according to owner Mynette Ecker. Skipping full sets, her customers will buy a separate piece to wear with what they own.

Diane Cole Morley, owner of Cole’s of Nassau, a Bahamian department store with three island locations, was more cautious going into an election year. Even her posh Lyford Cay shoppers are being thrifty.

“They’re waiting to see what happens with Europe,” she said, also lamenting the changing face of tourism at the Atlantis due to travel promotions. “Resorts and cruises are appealing to guests that don’t have extra spending money beyond their initial vacation packages.”

Despite decreasing her budget 15 percent, she ordered fringe styles from OndadeMar and Despi, a marine line photorealism print from Roidal, Melissa shoes and Florabella hats. Lauren Moffatt was among her few new lines, while Trina Turk, one of her most popular designers, continually nails her print-driven niche.

“Marc by Marc Jacobs had a really fresh perspective in his tongue-in-cheek manner, like bottoms embroidered with kisses,” said Cole Morley.

ON WITH THE SHOW

“Lingerie’s still a work in progress,” she said, noting some  brands like Panache and Lise Charmel brought both swim and intimates.

The market’s vastness came to life at Sunday’s fashion show, where 270 designers circumnavigated an extravagant square runway with a digital video screen replacing hand-held signs. With so many players, it’s often impossible for buyers to get beyond scheduled appointments to scout emerging lines. Ecker of Beach Scene squeezed in one newcomer, Oakley.

Though all the majors attended Salon Allure, organizer Rick Fatzinger said they also stuck to tried-and-true brands like Eberjey, La Perla and Mara Hoffman, which were booked solid with appointments, especially on Sunday and Monday.

“SwimShow used to run five days, and I feel it could return to that so retailers have more time for smaller designers and accessories,” said Stein, although no plans are in the works to go back to a five-day format.