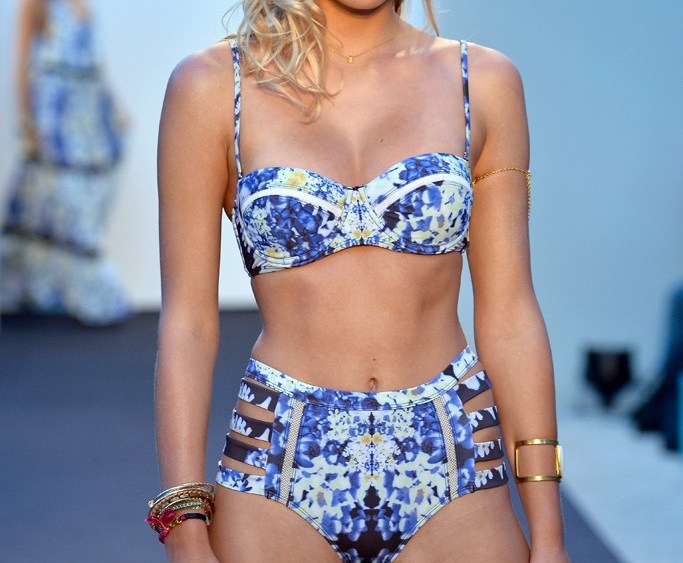 It’s been a tough year for swimwear.

Hurricane Sandy ushered in back-to-back seasons of extreme weather on the East Coast, from incessant rain to heat waves that dampened sales. Retailers could only focus on liquidating merchandise to make way for brighter days ahead as they attended Miami Swim Week, July 18 to 23. The key seems to be a new interest in activewear as a way to get business percolating.

“We had a short burst of business in early July before no one wanted to go outside again,” said Merrill Levin, owner of Shirley & Co., a 27-year-old specialty chain in Philadelphia.

The global $16.5 billion swimwear industry is growing — projected to grow at a compounded annual growth rate of 3.1 percent to $19.4 billion by 2018, according to Global Industry Analysts Inc. — but U.S. retail sales of women’s swimwear were basically flat this year, according to NPD Group research, owing to an already-short season, coupled with uncontrollable factors like the weather. Levin is among the category’s retailers that are seeking other avenues like activewear to grow year-round business, as manufacturers expand into a wider range of related categories to stimulate sales.

At SwimShow and Lingerie Show in the Miami Beach Convention Center, she previewed Manhattan Beach’s license for Trina Turk Recreation, an activewear collection combining the brand’s bold, colorful prints with swim elements like removable cups for a glam take on workout wear.

“This will be great for my store next to a gym,” she said, adding women of all ages who don’t even work out live in these looks.

Gottex is also expanding into activewear for 2014. Among the large offering that retails from $60 to $200, there are 10 stonewashed styles in three color groupings, stretch leggings in a New York skyline print and details like mesh piping and pockets that can transition from yoga to dinner. The brand doubled headwear, which launched last year, to 60 items. It also introduced jewelry in 18-karat gold-plated, acrylic and semiprecious stones with marine themes like a coral-colored reef cocktail ring retailing for $48.

“Our motto has always been ‘beach and beyond,’” said Linda Sassoon, president of Gottex North America, as she transformed pareos into ponchos and cocoon jackets. “We’ve become a lifestyle brand, and specialty retailers are writing the whole look.”

Lifestyle wasn’t the only hot topic. Unusual for a swim market, 2014’s big trend isn’t suit-related — such as past seasons’ fringe. It’s the rash guard, which designers have dubbed “fash guards,” since people who neither surf nor paddleboard also wear them for everyday, much like workout clothes for those who have no intention of going anywhere near a gym.

“It’s about capturing that same activewear customer,” said Jill Pavlovich, vice president of merchandising and design for fashion swimwear at Perry Ellis International, of the styles in blue and white stripes with kelly green crewnecks and black with zip fronts and shirred, adjustable sides it produces under licence for Jag. “Their matching swim bottoms also are functional — like having zip pockets for keys.”

Multibrand licensee Trimera Group is capitalizing on the fashionable rash guard, too, according to global sales director Ginger Tarabochia. Among BCBGeneration’s bestsellers for 2014 are cropped cuts with short sleeves in optical and meow prints that young women can wear with miniskirts after the beach. The company’s Oakley license has been revamped to meet contemporary fashion demands, as athletes continue to give feedback about function for the perfect balance.

“We noticed a huge need for sexy activewear. This is a major growth area for us,” she said.

Howie Greller, vice president of merchandising for Manhattan Beachwear, says the rash guard straddles an accessory and new silhouette. He cites the increase in water sports participation and the decline of sunbathing for its rapid success.

“Women are fine with covering up as long as they still look good,” said Greller, who offers them from nearly every license for 2014.

Surf culture has also spawned a resurgence in Neoprene. Designers who choose to work with the tricky material tend to surf or are closely connected to the sport for a deeper understanding of its realistic applications. Founded by a Hawaii native, Orlando-based Kikidoll advanced the trend with exclusive prints featuring tribal markings and surfboards, and mixed fabrics such as spandex sides and backs, since only the stomach requires padded protection when lying on a surfboard. Oleema Miller, the wetsuit-wearing owner of Newport Beach, Calif.-based Mikoh, uses a slick, stretchy version that looks and feels like black leather for styles with hand-stitched details and seamless edges that don’t dig in. Bandeaux easily translate from riding waves to going for drinks by layering under blazers and flowy tanks.

“Two-for-one value is a huge selling point,” she said.

Where surf didn’t come into play, just about every other activity did, from yoga to bending over to pick up one’s children. Judging from sales reps’ frequent mentions of active attributes — high necklines, no hardware that catches and silicone seams that stay in place — it’s a wonder that anyone simply relaxes by the pool anymore.

Flagpole, a New York-based line started by two dancers that launched at the Salon Allure trade show in the W South Beach, stood out for its no-tie, leotard-inspired looks whose fashion and shaping elements come from boning, colorblocking and multiple straps. A focus group of Crunch gym instructors tests its pieces.

“We grew up extremely active on the beach in Florida, and found there was little choice between a Speedo and a string bikini,” said co-owner Jaime Barker, extending the concept to après-swim gear in the vein of Ugg boots. “Our dresses and pants with side ties and pockets made with swim fabrics dry quickly and can be worn out and about.”

Stella Cortina Sardone, owner of Lilies & Lace boutiques in Armonk, N.Y., and Wilmington, N.C., compared the newcomer to an “Eres for the American lifestyle.” The lack of prints (which are a tougher sell) and fresh cover-ups also attracted her.

“I’m glad they didn’t offer just another flowy caftan,” Sardone said, noting she had increased her budget by 20 percent for rash guards and cover-ups from last year. “I find myself writing everything but swimwear from swim lines these days.”

Beyond tribal prints, technology brought newness to several runway shows. Salon Allure skipped its usual fashion presentation crowded around the W pool and collaborated with Xtra Life Lycra spandex for an intimate, one-woman overview modeled by Hannah Davis in the hotel’s ballroom. As a prerecorded video of Davis in suits by 24 designers played on a large screen, the real deal emerged a handful of times to walk the runway.

“I got the idea from a Beyoncé performance where she interacted with her digital self,” said Salon Allure organizer Rick Fatzinger of the fast-paced, ravelike visuals, which ran from multiple and kaleidoscope effects to exotic backdrops. “Plus, it’s a great way to afford a top model.”

That show, as well as four others during Mercedes-Benz Fashion Week Swim at the Raleigh, were streamed live. Everything But Water, an Orlando-based specialty chain with 72 locations, exclusively organized the latter, which marks the first opportunity for consumers to preorder nearly every piece from unedited 2014 collections by Mara Hoffman, ViX, Luli Fama and L*Space on the store’s Web site for about a week after the presentation.

“We extended the cutoff date due to response,” said Sabra Krock, co-owner and creative director of Everything But Water, of the virtual trunk shows. “This was a big initiative with a countdown clock on our homepage, Facebook show reminders and e-mail outreach to designers’ databases as well as our own.”

Buyers needed comfortable shoes and shuttles more than ever this year. Not only did they struggle to take in SwimShow’s additional hall for a total of 400,000 square feet and 3,000 lines, but Cabana and Standard Swim trade shows made their debuts on top of the established Salon Allure.

Cabana cofounder Janet Wong had an easier time of it since half the 40 vendors are carried at Atrium boutiques in New York and Miami, for which she is head buyer. She reported that the curated mix within a bright, relaxed setting where attendees sipped coconut water from fresh-cut shells was intended to make the process smooth for everyone.

Some brands participated in Miami Swim Week for the first time because of Cabana. Lemlem, which normally shows in Paris and New York, opened a dozen new accounts at resort and independent boutiques, according to operations director Tiffany Wilkinson-Raemer.

Rainbow Wave showroom founder Maria Lemos, who has offices in Paris and London, reported that rather than grow in quantity, the show has enough demand to edit its collections further to get the best items, especially European brands. Following three years at SwimShow, Basta Surf moved to Cabana for more exclusive retailers, according to co-owner Emily Ford.

“At huge shows,” she said, “we waste too much time figuring out who’s legitimate versus who’s just browsing. She opened five new accounts and said 60 percent of her traffic was walk-in.

Salon Allure doubled last year’s attendance with 160 pre-registrations and 120 walk-ins according to Fatzinger, who returned to the original one-floor layout and a more fine-tuned selection limited to 43 swim and accessory lines.

“It’s a positive evolution that swim week has become a lot like Basel, where there’s the main event and then all these satellites,” he said.