Swimwear: Ones To Watch

Here, a look at designer brands to keep an eye on for cruise and spring. 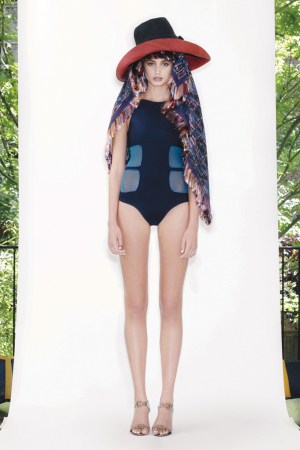 Whether actively involved with water sports or inspired by the trending beach and surf culture worldwide, designers of these hip brands offer a fresh spin to their assortments with signature prints, bold splashes of color and specialty fabrics. Among the new offerings are figure-flattering Neoprene or lightweight microfiber blends of elastane with nylon and polyamide, as well as tops and cover-ups that can be worn on the beach, to a poolside party or on the club circuit.

Here, a look at designer brands to keep an eye on for cruise and spring.

Many people might think of ready-to-wear designer Cynthia Rowley as being happiest wearing one of her trendy dress designs — not a Neoprene wet suit.

But Rowley is a fierce water sports enthusiast, and she says she would rather be surfing, stand-up boarding, snorkeling or swimming any day of the week in one of her sporty swimsuits or printed wet suits.

Rowley’s passion for water sports is translated into her swimwear designs, which have been created in-house since 2012. She says she got into the swim business after she couldn’t find a wet suit that was functional and stylish.

“Being such a water sports person, I hated he idea of wearing ugly wet suits…so I thought it would be great if I designed crazy, killer wet suits that are printed in Italy and sent to Asia to be made with welded seams,” said Rowley.

“I think it’s important for fashion brands to stay relevant, and for me, swimwear is part of my brand identity, and that’s very important. Fitness, health, sun and surf are all part of me and my brand ID. It underscores the importance of a healthy lifestyle.”

The designer further noted that her company has developed a “breathable and bonded” Neoprene fabric that will eventually be used in other categories.

“I’ve been using it in the rtw collection for a couple of years,” quipped Rowley.

Cynthia Rowley swimwear will be exhibited at SwimShow for the first time.

The California-based label was launched last year with six basic bikini separates, all of which were rendered in 82 percent recycled plastic.

“We’ve become known as LRB — Little Recycled Bikini,” said Greenlee. “We’ll be showing a mix-and-match capsule line, and will be adding eight bikini styles in tribal prints and solid colors like red and a special Kelly green I’ve created. There will also be a new natural shade that’s skin-tone friendly.”

She added that the brand’s first one-piece swimsuit will be unveiled at Salon Allure.

‘This will be the first time we’ve ever exhibited anywhere, and we chose Salon Allure because it offers an intimate experience for the buyers. That way we’re able to get more one-on-one personal time with retailers,” explained Greenlee. “We didn’t want a traditional trade show experience, which can be overwhelming.”

Suggested retail will average $83 to $87 for separates, while the one-piece style will be $198. All styles are self-lined.

SUBOO: FROM PARASOLS TO SWIMWEAR

What started out as a pleasurable pastime — designing beach umbrellas in fashion-forward prints and colors for trendy beach goers — turned out to be a thriving business for Sue Di Chio, founder and designer of Australia-based Suboo.

“It all started in 2008 as a hobby, designing beach umbrellas with really cool prints and colors,” said Di Chio. “All of a sudden, we had a huge fashion following. We quickly expanded into beach-related accessories, and then we launched swimwear in 2012.”

The swimwear and cover-ups, which now account for 15 percent of total business, will be shown at SwimShow, where Di Chio will also host a bevy of bloggers at the Suboo stand.

Di Chio said she felt it was important to get as much exposure as possible at Miami Swim Week.

“As a brand, it’s an excellent platform to launch anything you’re doing, and to let the media and buyers know you as a brand….We’ll also be doing a stand-alone show with Mercedes-Benz on July 19, and we’ve rented a home in Miami to do intimate presentations with buyers and the media,” she added.

While the brand is print-driven, Di Chio said this year’s focus will be specialty fabrics and embellishments. These include Japanese bonded lace with black Lycra spandex, laser-cut Neoprene zip-skirts and sequinned
leopard prints.

MIKOH swimwear got its start in 2012 in Southern California by sisters Kalani and Oleema Miller. The brand’s name is an acronym for their last name and first initials, including the youngest sister, Hana. In Japanese, Miko is a term that meant “female shaman” or a “female prophet” in ancient times. Having grown up at the beach where they surfed, swam and played in the sand year-round, their idea of a dream job was to create a bikini brand.

“It was like second nature for us. Starting a bikini company with my sister has been a dream come true,” said Kalani Miller. “We’ll be launching our fifth collection this July — a combination of bikinis, effortless, easy-to-wear cover ups and a few surprises that are inspired by our travels around the world.”

Kalani, who was vacationing with her sister Oleema in Bali, described the brand’s philosophy as synonymous with “femininity, strength and beauty.”

“MIKOH swimwear is a fusion of statements, colors and prints inspired by the world around us. It’s seamless and hardware-free, and has the option to mix and match all of the pieces. We created MIKOH for the confident, chic woman who wants to stand out and make a statement, no matter where she is,” she said.

Oleema noted this will be the third time showing at Salon Allure during Miami Swim Week. “We love the fact that we are away from the convention center atmosphere, and that we get to look out at the Atlantic Ocean while showing the line. Miami is the perfect setting to share the new collection….I love that in Miami, it is all things beach and beach-inspired. There is the biggest cultural mix of people, which is perfect for the MIKOH aesthetic.”

Suggested retail is $100 for bikini separates and $194 for one-piece suits.

The mantra of California.-based Mary Grace Swim is “sharing equal love for fashion and surfing.”

Founder and designer Mary Grace Logan launched her collection last year for spring 2013 with inspiration gleaned from her trips to Fiji, Mexico, Central America, Africa and Indonesia. The brand is gaining recognition for its dual-purpose approach — reversible tops and bikini bottoms that are rendered in bright, fun prints on one side and a bright solid on the other.

“But we had production problems with the printing factory, and unfortunately we won’t be able to show at SwimShow, even though we paid for a $5,000 booth,” lamented Logan. “However, we’re going to show the cruise collection at the Swim Collective in Huntington Beach [Calif.], which runs Aug. 12 and 13.”

Despite the setback, Logan is working on the spring 2014 collection, which will have Moroccan, Indian, and South American influences, including blue and white tile prints, mini mirror embellishments and bold bird-of-paradise colors.