The Year in Legs: The Kate Middleton Effect

Given her positive image and sky-high fascination factor, it’s not surprising that she is elevating the nude legwear category to fashion-worthy status.

By Julia Neel and Karyn Monget on December 11, 2012
View Slideshow 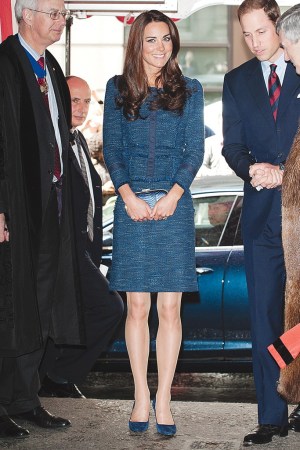 LONDON — Let’s face it: Some apparel and accessories items scream dowdy; their mere mention can make fashion purists wince. Christmas sweaters and fanny packs come to mind, as did nude hose — until recently. Enter the Duchess of Cambridge: young, beautiful, always impeccably dressed. During public engagements, many of them formal state occasions, she is rarely seen bare-legged. Given her positive image and sky-high fascination factor, it isn’t surprising that with her legwear of choice — primarily flesh-toned, especially for dress-up affairs — she is single-handedly elevating the category to fashion-worthy status. St. James’s Palace, the official household office of the Duke and Duchess of Cambridge, declined to comment on legwear protocol, but Jo Bryant, etiquette adviser and editor of “Debrett’s Etiquette for Girls,” said, “Debrett’s would always recommend that one should wear tights for formal occasions; bare legs are often too casual, especially with smart outfits.”

Kate Reardon, editor of Tatler, the U.K.’s fashion and society magazine, said the upper classes have always had a penchant for nude, sheer hose. “Up to about 20 years ago, it was seen as a bit trashy not to wear tights at all times,” Reardon said. “While the rest of the world has moved on — reveling in advances in hair removal and self tan — posh Englishwomen have clung to them doggedly.”

RELATED STORY: They Are Wearing: Legwear >>

Perhaps, Reardon reasoned, it’s due to chilly English summers. Whatever the specifics, suddenly, sheers are sizzling at retail, and the hosiery industry has Middleton to thank. Earlier this year, British supermarket chain Asda reported that sales of its flesh-toned hose had grown by 500 percent in response to the Duchess’ frequent outings. At Selfridges, sales of nude hosiery went up by 46 percent immediately after the royal wedding, and are up 27 percent this year compared to last. Year-over-year sales of Wolford’s Naked style are up 130 percent there, and those of Falke’s Sensation 20 are up 250 percent, according to Helen Attwood, Selfridges’ swimwear and hosiery buying manager.

London-based e-tailer Mytights.com has also noticed an uptick. “Sales this summer were up 25 percent on the same period in 2011,” said founder Laura Godsal. “I think most people agree that wearing sheer tights is much more glamorous now thanks to Kate Middleton.”

The trend has infiltrated other markets, the U.S. included. Cathleen Moxham, head designer of Hanes legwear at Hanesbrands Inc., said the Duchess’ impact has been “tremendous.”

“She’s been very influential, and we definitely see the momentum continuing,” said Moxham, who declined to provide specific sales figures. She noted that the brand’s biggest sheer hit this year was the introduction of run-resistant technology in its line of Silk Reflections in skin tones. “It’s a very prim and proper look.”

At Barenecessities.com, Maureen Stabnau, senior vice president of merchandising, said skin-toned sheer hosiery is now among the bestsellers at the site. “We are having a banner year, well over 20 percent against a year ago,” she said. “Sheers are definitely leading the legwear pack in terms of increases.”

According to Valerie A. Mackie, marketing director for legwear at Invista Inc., younger consumers are becoming attracted to the elegant appearance of sheer hosiery. “Kate’s choice in sheers is fueling new descriptions such as ‘gloss’ sheers or ‘polished’ sheers,” Mackie said. “Her choices are helping consumers understand that wearing hosiery creates an even, cosmeticlike effect to legs, especially when summer tans have dissipated.”

Russel J. Klein, president of Easton International, the U.S. distributor for German luxury brand Falke, concurs. Fifty percent of Falke’s sheer business is in skin-toned shades, and for spring the company is expanding its nude palette with a range of hues that address different ethnicities. The range will include seven new hues: crystal, powder, golden, new golden, cocoon, sun and new sun.

Klein said the Duchess’ impact extends beyond the sheer renaissance. “Kate has been a tremendous influencer for not just sheer hosiery, but the overall legwear industry,” he noted. “By virtue of her wearing sheers, she creates a demand for legwear as being a finishing accessory. It’s her unspoken way of saying no outfit is complete without the proper legwear.”