The Short of It: Men’s Swimsuits Lose a Few Inches

Is that old bromide about hemlines and the stock market true for men’s swimsuits, too? 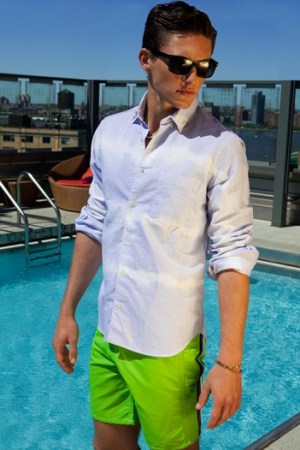 Is that old bromide about hemlines and the stock market true for men’s swimsuits, too?

And for next holiday and spring, too. Speedo is seeing strong orders for its square leg and volley shorts styles. Nautica is getting more interest in its shortest boardshort — though longer styles still comprise the majority of sales. “It’s definitely trending to shorter lengths, but nothing too aggressively short,” said Chris Cox, design director for Nautica, adding the 18-inch outseam, the brand’s shortest, is gaining traction. And brands with a history of shorter styles — like Penguin — are posting strong sales.

Macy’s seasonal buyer Kurt Meister said the thigh-grazing styles are for a more directional or athletic customer and represent a small portion of sales at the department store level. But the retailer is promoting Nike’s version of the style at some stores this season.

Echoing the general current in men’s wear for trimmer silhouettes, the volley short serves as a partial antidote to the baggy, below-the-knee boardshorts that proliferated during the last decade.

They signal a return to simple solids and classic colorblocking, too. Neons in particular are lighting up swim departments — a nod to Eighties California surf culture. “Be it color or the shorter sensibility, that decade is definitely influencing design,” Cox said. Vintage palettes and patterns from the Fifties and Sixties are also trending. “Bright, clean colors — kelly green, teal and poppy yellow — will be big for us next spring,” said Ann Payne, senior vice president of design merchandising and creative director for Penguin. “Fashion is really being driven by color right now, not print.”

Volley shorts are also suited to the growing demand for swimsuits that double as walking shorts. “It’s part of the beach-to-boardwalk idea,” Jennings said.

“They are so easy for every man to wear that swimwear has become a crossover lifestyle garment,” said Grace Fooden, senior vice president of merchandising for Speedo.

Macy’s quick-dry and multifunctional swim shorts helped the retailer post strong sales in the first quarter. Men’s swim beat plan by 15 percent in the first three months of this year.

Overall, the market has stabilized. Men’s swimwear sales were flat for the 12 months ending in February, according to The NPD Group.