Two of the oldest motivations in the world appear to be responsible for making innerwear a major player in the WWD 100: sex and money. 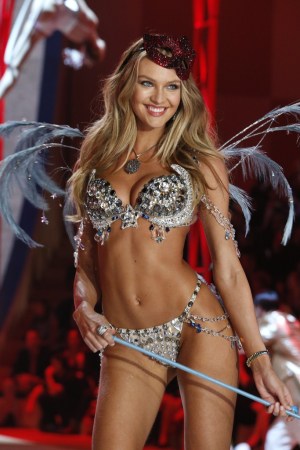 Two of the oldest motivations in the world appear to be responsible for making innerwear a major player in the WWD 100: sex and money.

It’s no surprise, considering the 24-7 media exposure that lingerie has received in wide-reaching advertising and marketing campaigns, multimedia channels and social media, including Facebook and Twitter, YouTube, and a prolific number of fast-growing e-commerce sites. Whether on the red carpet, where celebrities like Oprah Winfrey, Gwyneth Paltrow, Emily Blunt, Carrie Underwood and Jessica Alba openly talk about their undergarments, or with endorsements such as Hanes’ longtime partnership with sports superstar Michael Jordan, Jockey’s venture with celebrity stylist Rachel Zoe or Maidenform’s gig with Mad Men costume designer Janie Bryant—the popularity of lingerie has rocketed.

Much of the action has been generated by Victoria’s Secret and its slick “Very Sexy” marketing campaigns as well as the annual Victoria’s Secret Fashion Show featuring barely clad Angels such as Miranda Kerr, Adriana Lima and Alessandra Ambrosio.

Victoria’s Secret ran into a few bumps, however. The “Sexy Little Geisha” look was removed from the specialty retailer’s e-commerce site in September due to protests from Asian-American groups, and in November, a Native American–inspired costume in the show sparked criticism from consumers and Native American groups. The costume was removed from this month’s taped TV show. Animal activists protested a pair of snake eyes from a taxidermist used on a Snake Charmer costume. VS officials said the snake eyes weren’t real.

Examples of brands that spend big to nurture, update and keep their labels out front include Calvin Klein Underwear, with an estimated $50 million to $75 million marketing arsenal, and Victoria’s Secret, at an estimated $90 million to $100 million—$10 million of which is spent on the annual show. The media spend for Hanes is around $40 million to $50 million, and Fruit of the Loom’s marketing arsenal is between $70 million and $90 million, mainly for prime-time TV ads like the Olympics Ribbons underwear campaign during the Summer Olympics.

Jockey believes in marketing with celebrity cachet. Dustin Cohn, chief marketing officer at Jockey International, said the launch of the Rachel Zoe Major Must-Haves collection was an “important” addition to the 136-year-old Jockey business. The campaign launched in November magazines such as Marie Claire, Elle, InStyle, Redbook, Shape and Women’s Health, followed by outdoor advertising in Los Angeles, New York and Chicago with the new tag line “New Shapewear from Jockey, Major Curves Ahead.” The campaign is also being communicated through digital ads on Hulu, on Rachel Zoe’s Facebook and Twitter pages, and on The Zoe Report, a digital newsletter with 350,000 followers.

Meanwhile, the $600 million Maidenform company is constantly reinventing its heritage brand. Maidenform celebrated its 90th anniversary this year with a new spin on brand image, product transformation and expansion into additional categories of activewear and hosiery. Maurice Reznik, chief executive officer of Maidenform Brands Inc., noted, “What’s interesting is people just assume that we also do hosiery, sports bras and activewear.…The timing is great, and we will have a total bodywear brand. Devotion Comfort [bras] will be our biggest launch since One Fabulous Fit.”

Another big influence on brand awareness as well as business is the issue of consumer trust. Three heritage bra brands on the top-10 list exemplify brand loyalty and trust for multigenerational consumers: Playtex, Vanity Fair and Bali.

3. Fruit of the Loom