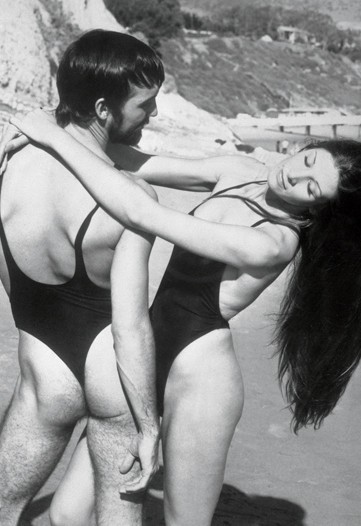 The thong — a tiny item with a huge pop-culture profile. Today, we think Brazilian beach bunnies, music divas Christina, Britney and Lil’ Kim, even the New York Yankees’ Jason Giambi, who got lots of press this summer when he revealed his method of choice for getting out of a hitting slump: slipping on a lucky gold lamé thong with a flame-red waistband by Intimo. “It works every time,” he claims.

But long before Victoria’s Secret’s “angels” hit the runway and Sisqó’s beat went “da-dum, da-dum,” the thong held a prominent place (so to speak) in various cultures, from ancient Egypt to feudal Japan. Long-ago loincloths, the earliest of which were made of sturdy, unforgiving leather, were the predecessors to the racy pieces that are de rigueur today. King Tut, who ruled from 1333 B.C. to 1324 B.C., was apparently a fan: More than 100 pairs were
found buried in his tomb. The Greeks, Romans and Japanese had their versions as well. While Greek citizens went commando, their slaves wore fabric loincloth thongs similar to the Egyptian model. The Romans wore a strip of fabric fashioned into a skimpy short called a subligaculum, a must-have for gladiators and athletes. Even Roman women embraced the thong, to wear under togas and tunics. But perhaps most famously, Japanese sumo wrestlers
first donned their not-so-skimpy versions as early as 712 A.D.

The origin of the word thong is from the Old English word twong, meaning a leather cord that could be tightened or loosened. The thong’s use in modern times goes back to 1939. Historians believe it came about when New York mayor Fiorello LaGuardia ordered the city’s nude dancers to cover their most private parts during that year’s World’s Fair. Their resulting scandalous undies are still the uniform of choice for strippers today.

When retailer Frederick’s of Hollywood introduced French-style black lingerie to the U.S. market in 1946, the thong was considered among the naughtiest items. Black lingerie was not widely available in mainstream America until the Forties, says Linda LoRe, chief executive officer of Frederick’s. Even so, they sold, becoming a popular — if rarely mentioned — item in sex shops.

Norman Katz, a 50-year veteran of the panties business who previously owned the now defunct I.Appel and Myonne labels, says, “It happened after the end of World War II. Men were coming home from battle, and women were extremely anxious to attract them. Everybody tried to make sexier underwear like G-strings and thongs. Then, we had a Baby Boom.”

The thong’s popularity received a major boost in 1974 when designer Rudi Gernreich created the first modern thong bikini. The popularity expanded to the beaches of Rio de Janeiro where intermediate styles evolved, including string thongs and tangas, which barely cover the buttocks with V-shape fabric.

Gale Epstein, president and creative director of Hanky Panky, says, “At first there was a cultural resistance. It took a decade to break down the cultural barrier, because thongs were considered out of the mainstream.”

But the bad-girl stigma began to wane in the mid-Nineties as thongs appeared in everything from high-voltage exposure in music videos to glossy pages of fashion magazines and the Victoria’s Secret catalogue, Web site and fashion extravaganzas.

Lingerie looks on fashion runways also were strong influences, as well as sexually liberated hit films such as “Basic Instinct,” “Striptease” and “Showgirls.”

Nick Graham, creator of the Joe Boxer brand, says, “What helped put the thong on the map in the U.S. was the explosion of lingerie in the fashion arena, beginning in the mid-Nineties. It’s just like the bra. Before, you would never see a bra, but now people are openly flaunting bras and thongs.”

Word of mouth was also key in propelling the popularity of the thong. “I did a lot of marketing research, and I discovered that word of mouth was important in making the thong not only a fashion item, but an everyday item,” says Valeria Campello, ceo of Cosabella.

But perhaps the most publicity the thong has ever received was in 1995 when White House intern Monica Lewinsky flashed President Clinton the straps of her thong underwear in what she described as a “small, subtle, flirtatious gesture.”