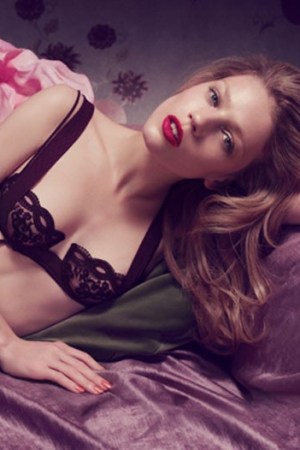 Zara Getting Into Lingerie

Underwear on the Rise Amid Pandemic

The plan to build La Perla into a worldwide brand is taking shape.

La Perla has evolved from a traditional family owned lingerie and intimates company to a modern operation seeking to build brand equity since private equity firm JH Partners LLC acquired a 70 percent stake in July 2007. The acquisition of La Perla Group was completed in October when JH Partners purchased the remaining 30 percent held by Nute Partecipazioni, a business operated by the founding Masoti family.

Jeff Hansen, a partner of San Francisco-based JH Partners and managing director of La Perla, said by 2013 he sees the 54-year-old Bologna, Italy-based business as “probably twice as big and profitable as today, with a greater presence in the U.S. and Asia. We’re in the neighborhood of 200 million euros [$158 million] today.”

Hansen, who is based in Bologna, said last December that he planned to streamline operations and refocus efforts on the primary La Perla brands, as well as reposition growth in underpenetrated markets in the U.S. and Asia. An important part of optimizing growth for La Perla is weeding out unproductive lines and cutting overhead costs, he said.

“We started a year ago, rationalizing the brands from 16 to five or six a couple of seasons from now,” Hansen said. “Most of those brands were developed just for the Italian market. And with every brand comes additional people and marketing. When we acquired the company, there were five or six brands that generated profits, and nine or 10 that generated costs.”

Hansen acknowledged the company is looking to lay off several hundred workers, noting the cuts are “only related to Italy and are part of a planned reorganization that had been in the works months before the recent economic turmoil.

“The goal of this reorganization is to streamline certain operations and position the company for better growth in the future,” he said. “But it takes a couple of years. You can’t just eliminate nine or 10 brands overnight. So, we’ll phase them out over the next two-to-four seasons and slowly transition customers in Italy onto other brands. In fact, we find our partners in Europe are much more excited long term because they say the number of brands is confusing to the consumer.”

Although the portfolio is getting an overhaul, the company will be adding corsetry, lingerie and beachwear to a top-performing sleepwear brand, Joelle by La Perla, and will spin off a new brand for the Malizia customer, a woman who “shops Victoria’s Secret, but when she turns 25, has more money to spend and wants something else,” Hansen said.

“It will be a newly created brand for the U.S. market, will be targeted to a younger consumer and it will be Malizia product,” Hansen said. “It will be introduced in the U.S. for fall-winter ’09 with a big marketing campaign that will include a fragrance. The Malizia name will be phased out in Europe.”

Suzanne Biszantz, chief executive officer of La Perla North America, said one of the biggest challenges in the U.S. is “defining future strategic opportunities among the brand portfolio that best aligns with the sales opportunity in the North American market.”

• A “balanced approach” between wholesale, retail and e-commerce, underscored by the relaunch of laperla.com in April. The Web site was designed by CreateThe, which also designed sites for Gucci, Fendi, Burberry, Ferragamo, Bottega Veneta, Tom Ford, Marc Jacobs and Frette, which JH Partners also owns.

• A focus on improving operational performance, including replenishment programs for spring 2009.

“We have to be careful…and keep inventories under control in what will be a challenging year next year in luxury goods,” Biszantz said. “Our current year in North America is trending toward 5 to 10 percent sales growth, so I don’t feel it’s been such a horrible situation,” said Biszantz, referring to the tough economy.

She added that a main strategy will be to “reach the luxury consumer who looks at La Perla as a fashion brand, someone who shops Dennis Basso [furs] and wants luxury lingerie.”

Key categories slated for growth are women’s swimwear and bridal lingerie, which Biszantz described as a “long-term strategy.”

“We’ll be launching a bridal lingerie, corsetry and sleepwear collection in late spring ’09,” Biszantz said. “In Europe, the La Perla Mare brand for swimwear is very strong and we want to bring it to the U.S. We already started with a fashion week event [in September]. We feel that swimwear has been underdeveloped here. For holiday, we’ll be sending out mailers with great photography of three must-have swimwear items to 15,200 consumers. For Valentine’s Day, we’ll be sending out mailers with four lingerie looks.”

The mailers, which will be distributed two to three times a year, as well as the fall-winter 2008 and spring-summer 2009 ad campaign, feature visuals photographed by Michelangelo di Battista with model Masha Novoselova.

The bridal collection of silk and exclusive La Perla laces will retail at prices similar to the upscale La Perla line: bras will sell for $225 to $300, undies will be $80 to $120, and long sleep gowns and robes will average $500 to $700.

Biszantz noted that the company plans to expand the number of La Perla boutiques in 2009 in the U.S. It operates 10 full-price boutiques, the newest of which opened in May at the Borgata Water Club in Atlantic City, N.J.

“We are looking at [more store] options, and are investing and upgrading the existing 10 U.S. stores to include redesign of interiors,” said Biszantz, adding that a major initiative this fall has been cocktail and shopping events at La Perla boutiques in Chicago, Beverly Hills, Boston, and the flagship in New York, which team up with charitable organizations.

La Perla operates 78 boutiques worldwide and is available at around 3,000 multibrand stores.