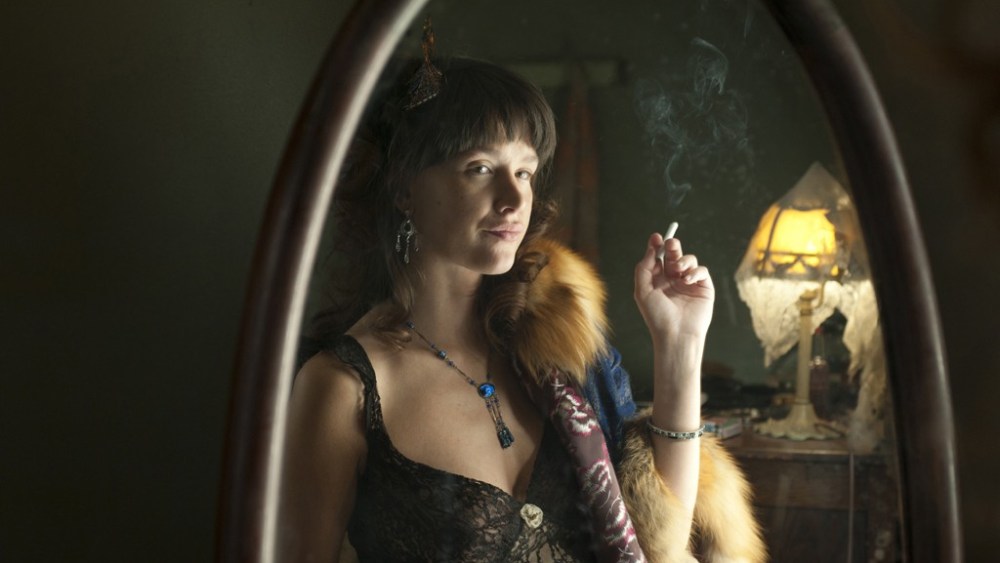 A slew of richly costumed TV shows is influencing lingerie in the consumer market.

Whether it’s gossamer sheer gowns or deconstructed corsetry in exotic mixes of fabric, metal and leather in HBO’s medieval fantasy, “Game of Thrones”; hand-crafted, built-in corsets that prop up bustlines in Showtime’s Italian dynasty drama, “The Borgias,” or slinky silk camis and slips decked with embellished necklines in the Twenties tale “Boardwalk Empire,” also on HBO, lingerie is helping to capture the ambience and look of the story line.

RELATED STORY: Costume Designers Behind ‘The Borgias,’ ‘Game of Thrones’ and ‘Boardwalk Empire’ >>

Movies and TV shows have had a role in fashion design for decades, especially when the cast is dressed in highly stylized apparel, undergarments and accessories. Michael Kors, Marc Jacobs and Prada were among the top designers who looked to the first season of AMC’s hit series “Mad Men” in 2007 for their collections, and Vera Wang got into the act a year earlier with her “Deadwood”-inspired lineup, influenced by the HBO frontier drama.

It’s no surprise that lingerie and sleepwear designers are also influenced by such shows, particularly the new breed of period dramas and historical fiction and fantasy series.

“These shows give me lots of amazing ideas,” said Sara Romoli, who launched her Trappola di Venere collection of corsetry on TrappoladiVenere.com this month. “There is no doubt that the popularity of ‘The Borgias’ has had an influence on me with my Italian background. It’s interesting for me to see how Italian life and styles from the past are depicted in the series.

“I love how the amazing vintage jewelry is incorporated with the corsets as well as the different kinds of jacquard fabric,” continued Romoli, who said “Game of Thrones” and “The Tudors” have also influenced past designs. “One of my new corset styles, The Rhea, was influenced strongly by the costumes in this show. I developed it using a black jacquard fabric with a print on the front and added some unique vintage jewelry as an accessory.”

As for the actual costumes in “The Borgias,” its costume designer Gabriella Pescucci says late 15th-century artists are her favorite source. “[Portraits by] painters like [Agnolo] Bronzino, [Sandro] Botticelli, [Domenico] Ghirlandaio, Pinturicchio [Bernardino di Betto], Raffaello, [Vittore] Carpaccio and [Pietro] Perugino feature noblemen with their ladies and the lifestyle of that world,” she told WWD. “That became for me the main inspiration for ‘The Borgias.’ Paintings are very important during any [historical] research process for me to get inspiration of any kind.”

The fascination with TV dramas and period costumes was supercharged by “Mad Men,” which continues to bring Sixties style to the fore via its Madison Avenue ad agency story line. Vintage bras and girdles — tailored yet buxom silhouettes — are obviously key to the look. That influence spilled into the retail world in 2011 when Banana Republic successfully launched the Banana Republic “Mad Men” Collection for men and women.

Janie Bryant, costume designer for “Mad Men,” believes it’s no accident that designers and consumers are infatuated with period dramas. “Viewers want ‘Camelot,’ especially after all of the mean cop and ER shows and ugly reality shows,” she said. “They want to get into their favorite period or fantasy shows because the images are beautiful and nostalgic, and they make an impact on how people feel, look, shop and dress. I love watching what other costume designers are doing on shows like ‘The Borgias’ and ‘Boardwalk Empire’ because they inspire me, too.”

From a sleepwear designer’s perspective, Flora Nikrooz says period dramas on TV have been “huge” for her aesthetic. “I’m a big fan of these shows and for spring 2013, the influence of ‘Game of Thrones’ is very strong in my collection.…I did a long pleated, sheer chiffon gown based on one of the characters, Daenerys, Mother of Dragons, as well as very rustic-looking Venise lace accents that have an earthier look embellished with miniature shells,” said Nikrooz, whose namesake label is produced by Age Group. “From ‘The Borgias,’ I focused on opulent looks, like highly decorated bodices encrusted with ornate pearls and glitter.…I continue to be inspired by ‘Boardwalk Empire’ and I’m doing playful rompers with mushroom pleats, flapper-style camis and tap pants, and feathers and Art Deco paneling. I expect these Twenties-inspired looks to continue being bestsellers at retail.”

At Only Hearts, Helena Stuart, designer and owner of the innerwear and apparel brand, as well as three boutiques in New York and three in Rome, singled out “Game of Thrones.”

“Its costumes really bring a historical reference to me. It’s not really medieval but it has Persian, Nordic and nomadic elements,” said Stuart. “I’m really into this pool of 500 years, not just vintage Twenties.…I think it’s a big influence on fashion.

“When you see it for the first time, it may look odd — like the women in the bordellos wearing a belt, not a strap or a sash [as underwear],” said Stuart. “I’m designing a bikini with fringe and rope that’s tied to the bikini ….In ‘Game of Thrones,’ there’s this scene of a barbaric wedding feast where the women are wearing strips of leather with their breasts coming through.…On a recent trip to London, I saw four versions of a bodysuit designed just like the costumes in that scene in a window at the Lingerie Collective store.”

To capture a wide range of sartorial options, Michele Clapton, costume designer for “Game of Thrones,” said she researches different cultures and geographic climates before she creates costumes for the show’s characters, who hail from the Arctic to the ocean to the desert.

“We assessed each character widely from across the world, and because of the fantasy, we took different ideas of what we really liked, not from certain periods,” said Clapton.

For Deborah Marquit, designer of the bra and corsetry label that bears her name, color is key in her spring collection, especially the medieval-inspired combinations of gold, scarlet and ivory featured in “Game of Thrones.”

“I love the costumes in the show and also like the pageantry and flowing gowns combined with gold juxtaposed against the background sets displaying earth, rock and castle interiors,” said Marquit. “From this I have been inspired to use gold metal elements such as gold rings and slides on bra straps with white sheers and ice blue tulles for spring 2013, combined with deep scarlet-colored lace slips, lace pants and bed jackets.”

Marquit’s inspiration for spring is also fired up by another HBO hit, “True Blood,” from which she is gleaning the “stark contrast of colors worn by the characters.” Her fall lineup was inspired by HBO’s remake of “Mildred Pierce,” and features lots of vintage-style undergarments.

Meanwhile, Jan Snodgrass, president of Hanro USA, said a Vintage Charme group launched in spring 2011 was the first in a series of luxurious lines to embody a “pure retro statement of Hanro’s extensive Archive Collection.” The collection, which was launched following the first season of “Boardwalk Empire” in 2010, features seamless rib knits of mercerized cotton combined with antique-looking woven lace. Special details include the hand-crafted lace edging, delicate bows and mother-of-pearl buttons, which were popular trims in the Twenties.

“Each individual model is a real collector’s item, and the whole idea has been selling very well at retail. We are putting a focus on this [‘Boardwalk Empire’ look] and that’s why it’s been so popular,” said Snodgrass.

As for the importance of intimates in the Twenties, John Dunn, costume designer for “Boardwalk Empire,” said undergarments played a “very big role” in a woman’s station in society. “Underwear and lingerie were very important and it was a status symbol, especially layering beautiful lace and silk underwear underneath a beautiful chiffon or georgette dress so it could be seen,” Dunn said. “A woman of means would definitely have had an extensive wardrobe of underwear and lingerie.”