The fantasy world of a make-believe Snow Queen and her Snow Angels swathed in Swarovski Elements took over the brand's Manhattan offices on Wednesday. 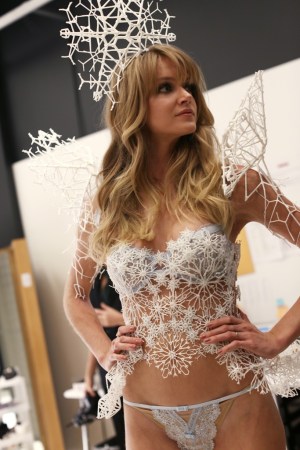 NEW YORK — The fantasy world of a make-believe Snow Queen and her Snow Angels swathed in Swarovski Elements took over the Victoria’s Secret offices in Manhattan Wednesday evening.

In an exclusive behind-the-scenes look at the upcoming Victoria’s Secret Fashion Show, Angels were being fitted into fairy-tale-inspired costumes, while artisans, beaders and costumers were literally sewing up the final details on costumes and accessories for the fashion extravaganza. The annual show is scheduled for Nov. 13 at the 69th Regiment Armory here.

Adding glitz and glam to the lingerie pilgrimage attended by the global media is Swarovski, which since 2002 has been providing crystals that adorn the costumes, as well as jewelry and footwear created by Nicholas Kirkwood. This year, 20 custom Swarovski creations will be modeled by some of Victoria’s Secrets’ most famous Angels, including Lily Aldridge, Alessandra Ambrosio, Karlie Kloss, Doutzen Kroes, Adriana Lima, Behati Prinsloo, Candice Swanepoel and Lindsay Ellingson.

“This is incredible for us because we’re looking at the future of costume design, instead of looking at archival pieces,” said Nahlous.

The “AB effect” will underscore the show’s Snow Angels finale, in which Swarovski and Victoria’s Secret will showcase a high-tech costume designed by architect Bradley Rothenberg from 3-D printing company Shapeways. The costume was made to precisely fit Ellingson from a 3-D scan of her figure, while 3-D computer printing technology was used to create the geometric filigree characteristics of the design’s snowflake motif, which will be encrusted with millions of illuminating Swarovski crystals.

“The Snow Queen is the iconic ice queen, and her Snow Angels are very angelic. Almost everyone will have a wing, a crown or feathery-looking capes embellished with AB crystals,” said Mitro.

“It’s really an industrial material, but it looks like a really fine lace.…We wanted her to look like a snowflake, a very fragile snowflake,” explained Neophitou-Apostolou.

Mitro further noted this year’s show budget will be “higher” than the 2012 edition, for which Victoria’s Secret reportedly spent more than $12 million. In addition to top models and artisans, the high-ticket budget for the runway show will include hair and makeup teams led by Orlando Pita and Tom Pecheux, as well as musical entertainment by Taylor Swift, Fall Out Boy, A Great Big World and Neon Jungle. Rihanna, Justin Bieber and Bruno Mars headlined the 2012 show.

Mitro said the show’s opening theme — “British Invasion” — will celebrate “all things British, ranging from London bobbies and a Curly Queen to Psychedelic Girls” gleaned from the Sixties. The show’s six segments will include a jazz-inspired vignette from the Twenties, as well as a Pink number with a fresh, collegiate spin.

Regarding marketing, social media initiatives will include CBS and VS Twitter and cheat tweets #VSFashionShow and #CBS. The show, which is not broadcast live, will be taped on Nov. 13 and will then air Dec. 10 at 10 p.m. EST on CBS. More than 12 million viewers domestically tuned in to the show in 2012, and it aired in more than 180 countries.

VS also will again feature “Victoria’s Secret Live” this year, a live-stream, preshow special that airs on VSAllAccess.com one hour before the taped runway show is broadcast on CBS. During the live-stream, Angels are interviewed by Mitro about their experiences at the show. Last year, more than one million viewers tuned into the live-stream.