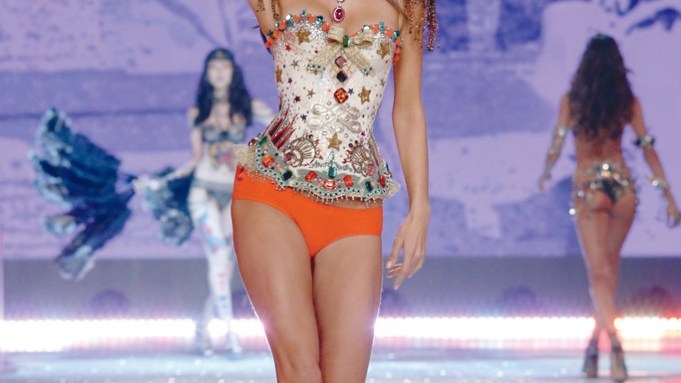 Talk about a stairway to heaven.

Of the 10 women named to Forbes’ 2012 list of the highest-earning models, six are or have been Victoria’s Secret Angels, the elite group of models selected not only for their considerable physical beauty but also for their personalities — and their ability to sell underwear and swimwear to women across the globe.

At the top of the earnings heap is former Angel Gisele Bündchen, who, with contracts for Pantene, Esprit and Versace, earned an estimated $45 million between May 2011 and May 2012.

She was joined by these high-profile Angels:

“Becoming an Angel significantly increases a model’s earning potential due to their visibility around the world,” said Richard Habberley at DNA Model Management, which represents Ambrosio, Kroes and Lindsay Ellingson, another VS Angel. “It changes the girls’ careers completely.”

Carole White, founder of Premier Model Management in London, said, “It was the most massive thing that could have happened to Miranda Kerr. It made her name. Who had heard of her before Victoria’s Secret? They are great at taking a girl — a good-looking model, but a catalogue model — and launching her into the stratosphere. It’s like a modeling medal.”

But Habberley noted that selling bras and undies can be a tricky business.

“The merchants drive the decisions on the Angels. They [Victoria’s Secret] try the girls out, and certain girls sell product. They’re women that appeal to other women. And they’re special because they never appear in men’s magazines. Once you start to do that, they become threatening [to potential female customers],” said Habberley.

Being an Angel opens the gates of opportunity, too. Angels are expected to appear in the annual Victoria’s Secret fashion extravaganza in New York, which in 2012 was broadcast on CBS to more than nine million people. They are also required to appear in ad campaigns, make regular TV and in-store appearances, and pose for Christmas, Valentine’s Day and swimwear catalogues. The exposure often draws lucrative contracts for film and TV — cases in point, former Angels Heidi Klum, Tyra Banks and Rosie Huntington-Whiteley.

“They put across their personality. They’re very visible,” said Viva London founder Natalie Hand. “Victoria’s Secret is very proactive in media training for the girls, and I have seen girls transformed through the process. There is a trend for girls with character and personality now. Over the last three to four years, clients really want to have VS girls in their campaigns. Ten years ago, it was seen as just so American, but now internationally, it’s a very powerful campaign.”

This recent sea change in attitude toward the Angels is due in part to British stylist Katie Grand, who met Brazilian Angels Ambrosio and Izabel Goulart at Fashion Rocks in Rio in November 2009.

“Being Brazilian, they have that sort of jaw-dropping immediate beauty where you just sigh and think, ‘Wouldn’t life be perfect if I woke up looking like that?’” quipped Grand.

“I then started working with James Lima and Prada on a Prada archive film called ‘The Love Thing,’ and chose to cast Alessandra in that,” mused Grand. “Miuccia, I think, liked the idea of her being [different from] the usual ‘Prada girl’ and cast her, along with Miranda and Doutzen, in her 2010 winter show.

“It was the same season I cast several Angels in Giles  [Deacon’s] show and then also in the Vuitton ‘Bardot’ season. Marc [Jacobs] sent me a text at the beginning of the year, saying, ‘I’m into tits,’ to which I replied, ‘Oh yeah, me too,’ as I’d been doing all this work with Alessandra and the other girls. I love how these girls turn up and are perfection.…They are kind of otherworldly, like a Stepford Wife, like beings from another planet. So perfect.”