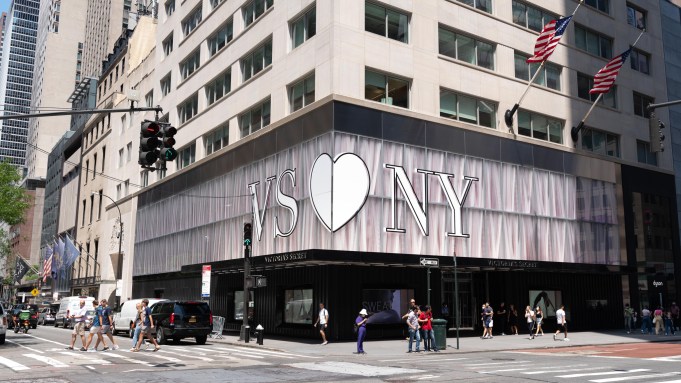 Victoria’s Secret’s updated Fifth Avenue flagship is filled with plus-size mannequins, subdued shades of pink, soft lighting, floor-to-ceiling mirrors and everything from lingerie to swimwear to activewear. Maternity bras are coming soon, too.

“In retail, the devil’s in the detail,” Greg Unis, chief executive officer of Victoria’s Secret Beauty, told WWD in an exclusive walk-through of the redesigned space at 640 Fifth Avenue in Manhattan, which opens today. “When you walked into the [old] store, what you would have seen a couple of months ago, was a very dark store. It was very sort of dimly lit, a dark ceiling, dark lacquered walls. The ceiling would have been black. You walked in and it just had a very different feeling. It set a very particular tone. It was actually kind of hard to see the product.

In fact, Victoria’s Secret’s new redesigned stores — part of the company’s larger rebranding efforts, which will include the lingerie business, along with Victoria’s Secret Beauty and Pink spinning off into a stand-alone firm next month, separate from the Bath & Body Works brand — is a striking contrast from what Victoria’s Secret and its Angels once embodied.

Gone are the glossy black-and-white shots of the Angels at various fashion shows plastered along the walls. Many of the oversized tables filled with underwear are gone, too, making way for a more spacious area that is easier to move around. The flagship’s museum-like third floor, which once housed Victoria’s Secret attire worn by the Angels at fashion shows, has been closed off. It will soon reopen as an event space for various launches, Unis said, while the bedazzled bras and feather boas from past fashion shows have been moved to storage.

Instead, custom blush-colored wallpaper lines the first and second floors. The images of the Angels — what was once considered the “ideal” version of beauty by some — have been replaced by floor-to-ceiling mirrors, so shoppers can quite literally see themselves reflected in the product. So far, about half of Victoria’s Secret’s store fleet have had photos of Angels removed. But Becky Behringer, Victoria’s Secret’s executive head of stores, said the company is hard at work to remove them all in the coming months.

Meanwhile, store mannequins come in an array of shapes and sizes, including short and plus-size models, along with tags on each form, so shoppers know which size each mannequin is wearing.

“In the stores that we do have [larger mannequins], the customer notices immediately,” Behringer said. “It is a trigger for her in terms of identifying change in the organization.”

She added that the company will also soon carry “a more expanded size range than we do already online. We are introducing larger cup and band sizes for the customer, too.”

There are also multiple cash registers across all three floors, in an attempt to make shoppers feel less cramped when making a purchase, and images of the same bra on three different-sized models lined up next to each other throughout the store.

“This shows a more diverse range, instead of having just one model wearing the product,” Behringer explained.

The hot pink leopard patterns that once adorned the fitting rooms, many of which were closed during the pandemic, will soon reopen with lighter-colored walls and associates to teach shoppers how to measure their own bra size from 6 feet away. The basement’s magenta-colored walls, home to the Pink brand, have been replaced by a less harsh, more Millennial-friendly pink as well.

There are also various fragrance and lotion testers set up around the store for shoppers to try out. Unis said these will be in place wherever local COVID-19 regulations allow. Same goes for masks, which will be available for free at the front of the store. Although neither shoppers nor associates will be required to wear them if they’re vaccinated.

“We’re in the middle of a brand transformation and stores are the ultimate expression of a brand,” Unis said. “Transforming the environment was so important for us, to show our customers that we’re doing something different.”

Unis is talking about Victoria’s Secret’s comeback strategy, which has been in full effect through the pandemic — if not longer. The lingerie brand owned by L Brands, while still the largest innerwear firm in the U.S. women’s intimate apparel space, has been steadily been losing revenues and market share for the last few years as consumer preferences shift from overtly sexy to more comfortable innerwear offerings.

Now, Martin Waters, CEO of Victoria’s Secret Lingerie, said at L Brands’ investor day earlier in the month that the company’s mission “is to be the world’s leading advocate for women. And that’s about creating lifelong relationships with women reflecting their journey and their community and creating positive change for the world through the power of our platform and through our products and our services.”

That includes the VS Collective, which was launched in June. The initiative centers on a group of women from diverse backgrounds who will share their stories by way of collaborations, business partnerships, cause-related campaigns and various platforms, such as a podcasts and social media.

Unis added that advocating for women is “not about signage. It’s about how you interact with the customer. It will include philanthropy in organizations that are focused on women. It will unfold over time. And it’s our North Star. It will literally touch every facet of what we do.”

He went on to point out that Victoria’s Secret’s 867 stores — down from 1,143 in 2016 — “is a huge advantage for us.” That’s because most stores turn a profit of roughly $900,000 and have 3.8 years left on their leases, on average, leaving room for negotiations, according to executives at the investor day.

In addition, three new Victoria’s Secret concept stores are coming this fall (although the exact locations have not yet been disclosed), while the company simultaneously tries to beef up its digital business, including buy-online, pick-up-in-store capabilities.

“We’re calling them the store of the future,” Unis said. “They’re a completely different format.

“We’re very respectful of the competition,” he added, acknowledging the plethora of new lingerie brands entering the market, eager for their piece of the pie. “And we’re focused on what we do best. We’re a brand, an emotional brand, that customers actually really care about.”