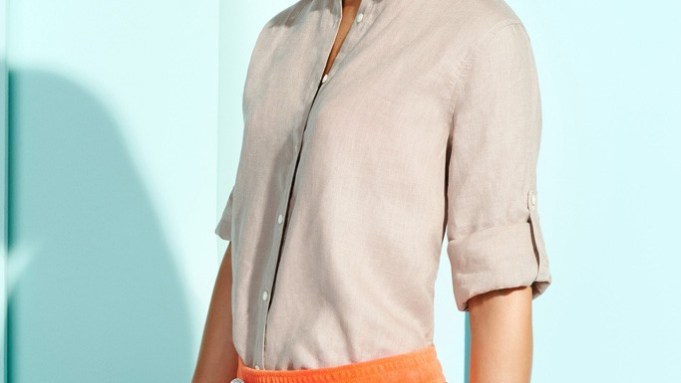 PARIS — Vilebrequin is set to make a splash in the women’s market. After testing the waters with a capsule collection for women for summer, the G-III Apparel Group Ltd.-owned label will launch a 30-piece line of women’s swimwear and ready-to-wear in November.

“Women already represent half of our traffic in-store. We wanted to offer the Vilebrequin ‘spirit’ to her,” said the brand’s chief executive officer, Roland Herlory.

For example, the Vilebrequin signature swim trunk Moorea was reinterpreted as a shorty for women for the capsule collection that also includes a boyfriend linen shirt, both of which are best-selling items in stores, he said.

The collection also includes a sweater, linen pants, dresses and Bermuda shorts, as well as items for girls. Retail prices will range from 120 to 300 euros, or $157 to $393 at current exchange.

Women’s apparel could represent 10 percent of Vilebrequin’s business within the next two years, according to Herlory.

The foray comes a year after G-III Apparel Group acquired the brand from Netherlands-based private equity fund Fashion Fund I BV for 85.5 million euros, or about $106.2 million. G-III’s plan is to give a lifestyle bent to a label created in Saint-Tropez, France, in 1971.

Herlory, a 23-year veteran of Hermès who stepped in with the new owners, is also aiming to expand internationally. In a phone interview from Los Angeles, he said he is scouting locations to open a second store there in 2014, and a third unit in New York.

“The aim is to open an average of 20 boutiques a year, including five to seven in the United States,” he said.

Vilebrequin counts around 120 freestanding stores worldwide and generates around 25 percent of it overall sales in the U.S. Another key area of development is Asia, where Herlory sees big potential. A pop-up store is set to open in Beijing this month through September, marking the first entry in Mainland China. Its first store in Singapore is in the pipeline for 2014.

In France, a store is set to open in Paris’ 8th arrondissement next year. The flagship on Rue Saint-Honoré will be revamped with a new concept this fall, making room for the women’s wardrobe in a “modular” format to better showcase new categories.