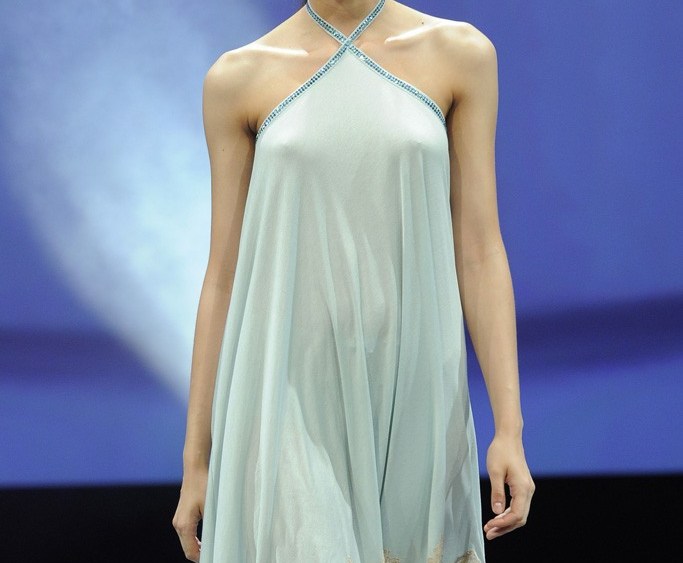 PARIS — Lingerie and swimwear trade show Mode City celebrated its 30th anniversary with a well-being theme and an outdoor area open to the public — the first time the event has been open to nontrade visitors.

Despite this, visitor numbers at Mode City, which ran from July 6 to 9 here, were flat at 15,330, while figures at sister Interfilière textile fair, fell 3.3 percent to 11,054, according to show organizer Eurovet.

Even though there was a 7 percent increase in French visitors, many exhibitors bemoaned a lack of traffic at the show, and buyers admitted that business continues to be difficult.

“We’re focusing on trends rather than looking for new brands,” said Nicky Clayton, senior buyer for lingerie, hosiery, beach boutique and sleepwear at House of Fraser.

“We’re in the process of streamlining our offer,” she continued. “In the U.K., at the moment, ladies are looking for value for money and sticking to the brands they know. It’s a difficult time for emerging brands.”

“We are not taking so many risks, and concentrating on brands and articles that are sure. The standard has to be much higher for new brands,” she said.

Nevertheless, many brands were using the show as a launch platform.

New exhibitors accounted for 140 of the 500 at Mode City, while at Interfilière, 40 new companies were present.

“The offer has never been so rich,” Interfilière show director Laurence Nérée said.

The former is intended to help retailers “understand the interest of paying a little more for fabrics, so that they can communicate this to consumers,” said Marie-Laure Bellon-Homps, Eurovet’s chief executive officer.

She announced the creation of a new event, Riviera by Mode City, to be held in Cannes, France, Sept. 8 and 9 in order to allow retailers from the South of France, which represent 50 percent of the country’s swimwear market, to place orders later in the year.

In terms of trends, many brands were offering larger bra cup sizes, particularly in designs targeting younger consumers, like Chantelle’s reinforced cup Mutine model, which starts in a D cup and retails at 65 euros, or $83.47. It’s lower than the brand’s typical price point.

Coral was a strong theme for spring 2014 and was visible in many brand selections across lingerie, swimwear and loungewear.

These included Swiss company Zimmerli, which was presenting its new brand identity and whose offer for spring included coral washed silk pants. Suggested retail is 345 euros, or $443.

French brand Chantelle expanded its swimwear label, which sells at an average retail price of 110 euros, or $141. The brand previously offered only a short swimwear collection in Orcanta stores, also owned by Groupe Chantelle.

Meanwhile, the fetish trend highlighted as part of Mode City’s forum was a key theme in Chantal Thomass’ spring 2014 collection, inspired by the Napoleonic period. These included a quirky Cachotière shirt-topped bra with capped sleeves, retailing at about 200 euros, or $256.

The brand will be putting an increased focus on the U.S. market starting with its spring 2014 collections, according to a spokeswoman. Chantal Thomass was acquired by Groupe Chantelle two years ago.

“The new applications in lace and natural fabrics like cotton will allow us to expand Lycra Beauty,” said Invista’s global segment leader for lingerie and bodywear Arnaud Ruffin.