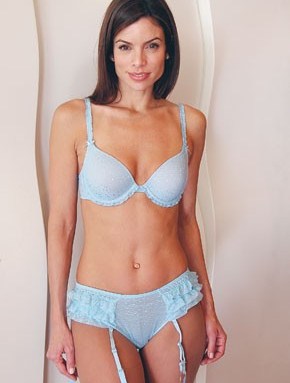 The new collection, called b.tempt’d by Wacoal, will be featured at a May 6 cocktail party for retailers and the media with informal modeling at its showrooms and offices on the 10th floor at 136 Madison Avenue here. Wacoal’s 10-year-old licensing agreement to produce and distribute DKNY Underwear will expire at the end of the year, said Richard Murray, president of Wacoal’s U.S. operation. Wacoal had also produced Donna Karan Intimates since 1992.

“Certainly, we needed to change things to continue the [Donna Karan Intimates and DKNY Underwear] licenses, and some of those things were not acceptable to the Donna Karan company,” Murray said. “Donna Karan sleepwear was not successful and we gave it up several years ago. DKNY was reasonably successful.”

Of the new proprietary brand, Murray said, “There’s a consumer there who’s younger and more fashion-forward that surely encompasses the business we did with DKNY and DKNY will surely be a competitor. We worked very hard and built a reasonably strong [young, contemporary] business, and we want to continue in that whole market segment. But it’s not just to replace DKNY.”

First-year wholesale sales for the b.tempt’d brand are projected at $7 million to $10 million, said Murray.

A spokeswoman at Donna Karan International, a unit of LVMH Moët Hennessy Louis Vuitton, said new licensing pacts for the designer brands’ innerwear businesses are being negotiated. Industry sources said Maidenform and Komar are both involved in the talks. Neither of the companies could be reached for comment.

Gwen Widell, executive vice president of merchandising at Wacoal, described the b.tempt’d collection of five groups of bras and coordinating panties and five panty programs as a “lifestyle and fashion-influenced lingerie brand. It’s DNA is quality and exceptional fit.”

She noted the line is aimed at women in their 20s and 30s, but added, “She could even be young-minded in her 40s. She’s bright, flirty and sexy. We have a separate design team of two designers, as well as Wacoal’s 75 consultants at stores nationwide. It’s a great advantage we have.”

The company has also hired Helen Mears as design director of Wacoal, reporting to Widell and overseeing the b.tempt’d business. Mears is a 20-year veteran of the intimate apparel retail and manufacturing industries, and was most recently creative director of the Angels division of Victoria’s Secret.

The nylon and spandex collection will include five themes:

l The Flirt, contour and push-up polkadot bras in pink and black and nude and black, with a matching tanga and garter pant.

l Sheer Brilliance, which features a lace-trimmed underwire bra and a push-up style, and a coordinating thong and bikini in nude, pink and black.

l Dream Girl, which has a stretch mesh-embellished underwire and contour bra, and a matching thong and bikini in yellow, aqua, black and nude.

l Demi Desire, a demi-contour bra of dull-luster satin and a garter-thong in black and pale green, and blue and pink.

l Pretty and Witty, a jacquard dot-pattern contour bra with a thong and garter panty in pink and blue.

“Distribution is aimed at 300 to 400 doors, primarily at stores such as Nordstrom, Dillard’s, Macy’s, Lord & Taylor and Bloomingdale’s,” said Vitale. “An aggressive national ad campaign will break in March and April 2009.”

Vitale said the launch will also be supported by in-store seminars and programs and incentives such as contests for sales associates.