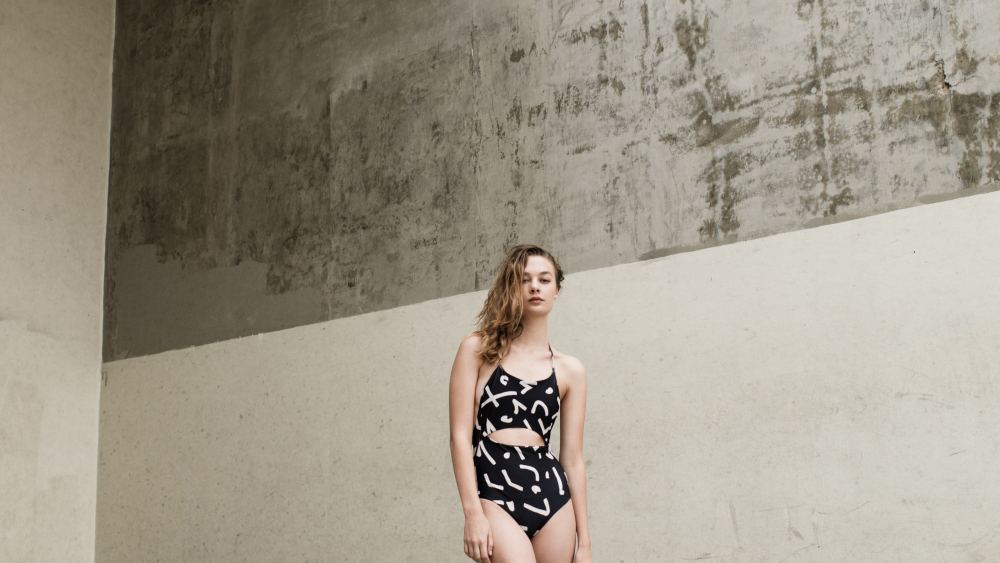 Even though foot traffic appeared to be sluggish at the women’s fashion and accessories trade shows held in Los Angeles from Oct. 7 to 19, a number of emerging brands made their premieres there for the opportunity to get face time with retailers.

Here are emerging brands that are ones to watch from each trade fair.

Brand: The Ones Who
Designer: Azita Rasoli
Provenance: Los Angeles
Trade show: Axis
Debut season: Spring 2017
Retail prices: Under $100 for each bikini separate and under $150 for a one-piece swimsuit
Retailers: None yet
Background: Azita Rasoli is approaching her first swimwear line with no formal training but a lot of personal experience. Born and raised in Los Angeles, she said, “the beach has always been a part of my life. I never found something that was in my price point and fit my aesthetic. I probably wouldn’t want to spend over $200 for a suit.” Thus, she priced her separates to retail for under $100 apiece and her one-piece swimsuits to sell for under $150. She opted for minimalist details on her 10 styles, for instance, cutting a crescent above the tummy on a one-piece, adding a ruffle to the front of another maillot and designing a low-cut V-neck on a bikini top. The nylon-Spandex fabric features four-way stretch, chlorine-resistance and UV protection guarding up to SPF 50. She also went personal in choosing the quartet of colors and the single print — black, white, lavender, olive and cream brushstrokes on black. “They’re colors that I liked personally and that I didn’t have,” she said.

Brand: Marybelle
Designer: Ester Kim
Provenance: Los Angeles
Trade show: Contemporary Curves
Debut season: Fall as a sportswear relaunch
Wholesale prices: $14 to $50
Retailers: dia.com
Background: Ester Kim designed for Joie and Vivre before returning to her mom’s business to revive it for the next generation. Started in 1995 and until recently known for its party dresses, Marybelle was relaunched this fall as a plus-size line. Kim partnered with her fiancé, Rob Paik, a veteran of men’s streetwear, and the direction they’re taking the company is toward a contemporary aesthetic in sizes 1x to 3x. “We added a lot of basics, a lot of knits,” he said, noting that the polyester shows texture such as dobby dots and microribs. Following a print-heavy fall collection, next spring’s grouping consists mostly of solid hues, including navy, gray and soft rose. The details let the looks stand out: ruffled cuffs on an off-the-shoulder top, an open back on a simple blouse, cutout shoulders on a ribbed knit dress. The couple plans to add cotton dresses and button-up shirts in its next collection destined for summer 2017.

Brand: Noorism
Designer: Noor Zakka
Provenance: Brooklyn, N.Y.
Trade show: Designers & Agents
Debut season: Spring 2016
Retail prices: $175 to $599
Retailers: Anthropologie for hats; Gilda’s in Boston and KES in New York for apparel; Maddy’s for both
Background: Having studied design at New York’s Fashion Institute of Technology and worked for Zac Posen, Ellen Tracy and other labels, Noor Zakka opted to follow the path of sustainability to launch her own business. Excavating the piles of secondhand goods at Goodwill, she amassed used denim that she then reworked into hats for her debut collection. In her second year, she introduced apparel, such as a peak lapel blazer that incorporated pant legs as sleeves and a camisole that featured vertical stripes out of original waistbands. Whether it’s a tank with an open back or wide-leg culottes, each item is finished inside with cotton-covered seams. The silhouettes also have clean, simple lines. “There’s so much going on with the colors of the denim,” she said. “I want these pieces to last a long time in people’s closets.”

Brand: CantiqLA
Designer: Chelsea Hughes
Provenance: Los Angeles
Trade show: ALT
Debut season: Spring 2016 for swim, holiday 2014 for lingerie
Retail prices: $55 to $95 for swim, $25 to $65 for lingerie
Retailers: Polkadots & Moonbeams in Los Angeles, J Girl in Malibu, Calif., Cityology in Long Beach, Calif.
Background: Chelsea Hughes used her time well as a freelancer designing denim and knits for brands such as Bebe and Guess to prep for the launch of her own business. “Besides being a fan of lingerie,” she said, “I think the lingerie market is a lot less saturated than other markets. It’s easier to make a name for yourself. Then I can branch out to swim and apparel.” She accomplished her first goal this past spring, when she introduced bikini tops, bottoms and one-pieces that share the same style premise of her intimates, which are handmade in Los Angeles, eliminate underwire and incorporate cutouts as well as extra straps to contour the body. In particular, straps loop from the base of bottoms to stick out from under short shorts. Her latest style is a lace bralette that doubles as a crop top with a high neck and cutout straps around the waist. “It’s about accentuating the curves of your body and bringing your eye to that,” she said. “Lingerie is meant to be seen. It’s no longer a hush-hush taboo kind of thing.”

Brand: P.Mai
Designer: Phuong Mai
Provenance: San Francisco
Trade show: Emerge
Debut season: Spring 2016
Retail prices: $49 for wristlets and $395 for backpacks
Retailers: Stearns Drive Boutique in Los Angeles
Background: Phuong Mai can credit her doctor for the spark to become a fashion entrepreneur. The former management consultant was diagnosed with a broken collarbone as a result of hauling a heavy bag stuffed with her laptop, notebooks and other materials necessary for doing her job. Her M.D. advised that she replace the shoulder bag with a backpack. “The biggest thing for me was creating something a working woman would find aesthetically pleasing but also carry all of her stuff,” she said. The result is a sleek alternative to a wonky computer backpack, made with two-tone nylon and calf leather tinted a deep black or butterscotch, from the same Asian factory that produces bags for Tumi and Knomo. Weighing 3 pounds, the backpack includes functional features such as a key clasp, interior water bottle holder and microfiber lining to prevent sunglasses from getting scratched. Each comes with a wristlet, which also can be purchased separately. Conscious of the need not to distract from her customers’ professionalism, she maintained minimal branding: an abstract etching of a phoenix, which not only represents her new career but also means “phuong” in Vietnamese. “I liken it to what the ballet flat did to heels, but I want to do it to handbags,” she said.

Brand: Alyson Eastman
Designer: Alyson Eastman
Provenance: New York
Trade show: Capsule
Debut season: Fall 2014
Retail prices: $250 to $2,750
Retailers: Reservoir in Los Angeles and Warm in New York
Background: After stints in design at Zac Posen and in wholesale at Ports 1961, Alyson Eastman started her namesake label in 2014. It was until she gave her own twist to the biker jacket for the resort 2016 season that her business started taking off. “I didn’t see any that interested me,” she said of the bikers jackets then on the market. “They were black or Gucci for $10,000.” Dipping into metallic leather for past collections, she spruced up her version of the fashion staple for spring in pistachio green, lavender, faux-stingray and a genuine python skin. Her latest lineup also includes silk jackets that were based on the kimono and high-waisted leather shorts; both are reversible. The $2,750 python jacket also demonstrates its versatility in sleeves that zip off to convert into a vest. After all, Eastman’s inspiration is the multifaceted Bali chick. “She’s cool. She surfs in the morning and rides around Bali on motorbikes,” she said. That attitude infuses her jackets. “You can wear them with a ballgown or Adidas sweatpants. You can wear it as a statement piece or your everyday piece.”

Brand: Kaban+
Designer: Yoshimi Radstrom
Provenance: Malibu, Calif.
Trade show: Brand Assembly
Debut season: Fall 2014
Wholesale prices: $49 to $132
Retailers: Pistol & Lucy in Malibu, The Westside Collective in Los Angeles, akogaretradingco.com
Background: Yoshimi Radstrom turned her lifelong fondness for vintage and a career designing textiles and children’s clothing into her own fashion company. Stockpiling old Levi’s, Army uniforms and silk and polyester scarves, she reworks them into pieces that blend an artisanal touch with the Japanese wabi-sabi concept that elevates imperfect aesthetics. In her home studio, she disassembled and sewed Levi’s jeans inside out, and attached gray fleece patches on cropped olive-green fatigues with trapunto stitching. For a feminine touch on short-shorts, she created ragged ruffles on the side by opening the seams, slitting the ends sideways and sewing the sides back. What could be construed as a cottage industry converges into the current trend for authentic looks in the premium jeans industry. “I’ve worn vintage ever since I was young,” she said.

Brand: William Bradley
Designer: Brad Parnell
Provenance: Los Angeles
Trade show: Select
Debut season: Fall 2012
Retail prices: $98 to $978
Retailers: None
Background: For his new spring collection, Brad Parnell hatched the idea of studying an explorer as a muse. Instead, he turned his quest inward, exploring who his customer is instead. The silhouettes swayed toward loose, boxy forms with dropped shoulders. While he muted his palette with hues of Champagne, mint and baby blue, stripes rose to prominence on his print portfolio, ranging from pencil-thin drawings to wide stripes. Pajama-inspired styles in silk charmeuse and crepe de chine, as well as T-shirt dress with long sleeves and a knotted hem, helped bridge the gap between casual and polished. Parnell, who moved his business from Alabama to Los Angeles three years ago, hopes retailers will want to explore the brand further to help it balance its revenue from pure direct-to-consumer web sales to a wholesale model. “It was an exploration of what we felt was new and creative,” he said.

Brand: Hy Works
Designer: Hyun Yu
Provenance: Los Angeles
Trade show: Coeur
Debut season: Fall 2012
Retail prices: $35 to $100
Retailers: The G2 Gallery in Los Angeles
Background: Take one background in fine arts, add a career in graphic design, throw in a jewelry-making class and that’s how Hyun Yu decided to start her own accessories company. “This was a pure accident,” she conceded. The long-ago class to create jewelry reignited her interest in fine arts, which she had studied at the University of Texas at Austin. “I love exploring materials,” she said. Her bun hairpins are topped with felt vividly dyed pink, aqua, olive-green and yellow, and necklaces string together handblown squares and circles of glass. “You can see a lot of shapes and clean lines. That reflects my graphic style,” she said.