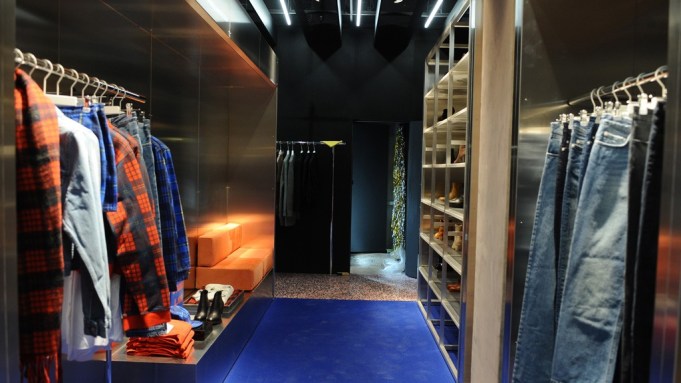 When the more than 5,000-square-foot store — Acne Studios’ largest in the world replete with a coffee shop, ilcaffè, transported from Stockholm — opens today, its location will certainly set the brand apart geographically and philosophically from many of its competitors. Its home is at the iconic 83-year-old Eastern Columbia Building at 855 South Broadway in downtown Los Angeles, nearly 10 miles from Beverly Hills.

For one, Johansson acknowledges the store may not make money, at least not right away.

Although the choice of downtown might be unusual, what Acne Studios is doing in the broader sense is not quite as atypical. It’s elevating the brand’s global profile with retail expansion. The brand has 40 locations, including company-owned stores, in-store shops and franchises, and the Los Angeles store follows new units in Paris, London and Osaka, Japan, this year. Next up is another location in Seoul, where Acne Studios currently has two outposts with partner Shinsegae. Hong Kong, New York — home to a flagship on 33 Greene Street — and American cities such as Miami and San Francisco are possibilities for future stores.

Johansson emphasized “gradual development” is Acne Studios’ priority for both retail and fashion, where he doesn’t want to enter every category under the sun. He estimated Acne Studios has opened about five stores a year, and he is partial to that pace. He said, “I think it is difficult to force the market. In New York, we have had a great response, so we tend to think there are some people here [in Los Angeles] who are interested in what we do. If it is going to work or not, I have no clue.”

As Acne Studios opens more stores, retail design themes are starting to emerge. Shelving and displays out of perforated aluminum made in Germany were introduced in the Acne Studios store on Quai Voltaire in Paris and make a return in the Los Angeles unit. They occupy a good chunk of the store’s square footage as do intimate compartments where customers can sit, read magazines and ponder the merchandise, which spans denim, men’s and women’s ready-to-wear, bags and footwear. The store also features pink terrazzo flooring, contrasting clear blue carpets, Acne Studios furniture and an installation by Belgian artist and Stockholm resident Carsten Höller of a giant mushroom.

Johansson, who works on Acne Studios’ stores with architect Andreas Fornell, originally considered two different concepts for the Los Angeles store. The discarded concept drew inspiration from the apartments above the store in the Eastern Columbia Building, a signature Art Deco skyscraper designed by Claud Beelman with an exterior covered in turquoise terra-cotta tiles trimmed with gold and deep blue. The winning concept views the aluminum structures inside the store as columns forming a contemporary support system buttressing the older building.

“The idea of the store was actually to fit in but make a modern structure,” explained Johansson. Talking about Acne Studios’ approach to stores more generally, he elaborated, “I tend to see the stores as a sign of the times, where we are at the moment. We make them unique. I think that shopping has to be unique because everyone is on the Web and traveling. I find that when I go to stores that are exactly the same, laid out exactly the same, they are a bit too random for the experience.”

In particular, Johansson pointed out that the intimate areas in the Los Angeles store are a response to how he prefers to shop. “I enjoy shopping a lot, but I’m very embarrassed about the staff seeing what I choose, so I like privacy. In that moment, I’m kind of sensitive. It is a creative moment when you are shopping for clothing because you are thinking about self-expression. It is very involved. I like some sort of privacy, so not everyone is looking at you,” he said.

Johansson founded Acne Studios in Stockholm as a collective in 1996 and it has branched into magazines, furniture, books, exhibitions and, of course, clothing. Sales are expected to increase from 89 million euros, or roughly $122 million at current exchange, in fiscal year 2012 to 130 million euros, or almost $180 million, this fiscal year. “We have been having constant growth. It’s never been up and down. There’s never been one big moment of a big huge financial step. It’s organic,” said Johansson.

Mikael Schiller, chairman of Acne Studios, has mentioned meeting with Kering, but he and Johansson have stressed they value Acne Studios’ independence. Schiller and Johansson are majority owners of the brand. “I like to have the opportunity to do whatever I want,” said Johansson. “I cannot change. I think we are on such a good path. As being the creative director, it would be a problematic situation having to make decisions that go against that [path]. I don’t see it as the industry is sh-t. I just think we know what we are doing; let us continue doing what we are doing.”

For now, Johansson is content planting his brand’s flag in Los Angeles and he recommends checking out the store at night, when the Eastern Columbia Building is fully illuminated.

“I’m very happy here at the moment. I’ve been very influenced by surfing lately. I surfed in Sweden. There is only one place you can surf in Sweden, and I was so happy to surf here,” he said, recounting that he stopped at Venice Beach upon landing in Los Angeles on Sunday. “The only thing I was scared of was the sharks.”