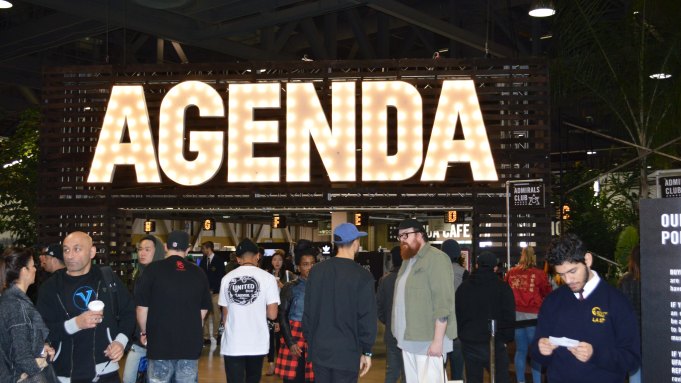 Grown-up vibes, well-groomed looks and some artisanal offerings made their appearance at the Agenda trade show this week.

While many of the brands showing at the action sports and streetwear trade show in Long Beach, Calif., largely got their starts printing catchy logos on T-shirt blanks, it’s grown-up time now as the industry resets after a rough few years for business.

Consolidation is occurring within the action sports space, said Element founder Johnny Schillereff, and brands that are able to tell authentic stories to consumers will win in the marketplace.

“Right now it feels like there’s been a shift in the look and feel of the industry,” Schillereff said. “Less flossy and a little more humble and I feel like Element’s really [vibing] off all of that. People are into brands that have some purpose and it’s starting to bring people back to more organic, grittier blue-collar hardworking brands. It’s really exciting to watch a more conscious consumer out there.”

Element continues to expand its Wolfeboro line of premium coats for both men’s and women’s. New for fall 2016 in the women’s Element Eden line is the introduction of a rain collection, with flannels also big for the season.

RVCA debuts its Selects collection of premium T-shirts for fall. It’s an elevated line of blanks with a cozy, worn-in feel made from Modals and washed cottons. Selects is priced from $35 to $45. The brand, while not straying from its roots or its start as a T-shirt company, is evolving with Selects.

“This is a great transition and a way to get a little bit more of a premium T in there in the line at a good price point as well,” said RVCA design director Anya Violet.

Over at Chino, Calif.-based LIRA Clothing Inc., lead women’s designer Natashia Tomek was busy showing off the fall collection of slinky jersey dresses and tanks meant to be layered over delicate, strappy bralettes. The women’s side of the company’s booth at Agenda held steady traffic Thursday, according to national sales representative Brian Barlow.

The women’s business for Lost International appears to be gaining momentum when compared to the men’s business, according to chief executive officer Joel Cooper.

“I think there’s no question if you look at the two sides of our business right now, there’s been more customers on that side than the men’s side,” he said.

Sea Gypsies, a young contemporary brand under Lost, launched in 2014 and now has six seasons under its belt.

Lost closed on a fresh round of funding in August that involved a group of investors who are part of logistics and distribution company Quetico LLC. The capital injection helped give it new breathing room to operate the business.

“We’re not doing anything radically different [with the money] other than the fact that we’re not so strapped for capital so we can invest in things like marketing,” Cooper said.

The Long Beach show is the start of the Agenda trade show season, which will be followed by a new Miami show Jan. 18 to 19 and another in Las Vegas next month running alongside WWDMagic.

The Agenda Emerge conference, featuring speakers such as Stance cofounder, ceo and chairman Jeff Kearl along with Adidas executives Nic Galway and Jon Wexler, is scheduled for Friday evening in Long Beach.