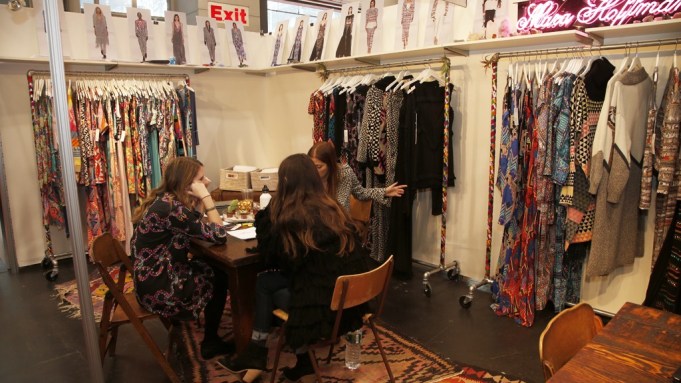 Active looks, bomber silhouettes, exposed zippers, textured sweaters and outerwear were under hot pursuit at Coterie, which opened Sunday and ran through Tuesday at the Jacob K. Javits Center in New York, where some 1,400 exhibitors participated.

Retailers shopping the show had cool, fall days on their minds and were pleased with what they were seeing. There were numerous sweaters, including turtlenecks, chunky sweaters, coat sweaters and sweater dresses from a variety of vendors. Leathers, both fake and real, suede and furs were evident in many fall lines, as well as an emphasis on active bodies, both in sweatshirts and track bottoms. Details including embroidery, quilting and exposed zippers were popular with many exhibitors.

“We’re known for our sexy tops, but we added furs for fall,” said Ramy Sharp, owner of Ramy Brook, a ready-to-wear line. She said shrugs and vests with leathers are a new category for the company. She also introduced bags for fall, including suedes and leathers, some with chains. Ninety percent of Brook’s apparel collection is made in New York, and the company sells at stores such as Neiman Marcus, Saks Fifth Avenue, Shopbop and Bergdorf Goodman.

Bailey 44 was having a good show with its flirty dresses and new knit line. “Dresses are doing well, in addition to sweater jackets in boiled wool. What’s doing amazing is our blanket sweater,” said Ruthy Emsallem-Grode, owner of the company.

“[Bailey 44] is our number-one-selling line,” said Ruth Krass, owner of Bedazzled Boutique in Newtown Square, Pa. “I like the look of it. It’s really comfortable and easy to wear. My daughter’s in her 20s, and I’m in my 50s, and it spans all the ages,” said Krass. “We’ll bring in the new knits. The fit is amazing and it’s comfortable.”

Priscilla Clappier, who was shopping for her store called Favorites in Huntingdon Valley, Pa., said: “We love Minnie Rose. I especially like it this time. It’s very sporty and wearable, and there’s also some elegance.” She said she was also shopping lines such as Velvet by Graham & Spencer and Burning Torch at Coterie.

Deborah Shuart, owner of Deborah James, which has two contemporary specialty stores in Boca Raton and Fort Lauderdale, Fla., was seeking styles that would be attractive to her Florida clientele. “I’m liking texture. I’m also seeing some tweeds with leather. Inhabit looks great. I love their sweaters. They’re handsome and rich and are in stretch cashmere. I’m in Florida and it’s a totally different vibe. I’m into casual luxe active,” said Shuart. She said the boyfriend jean “still rocks,” and she does well with Citizens of Humanity and Current/Elliott. She said Calvin Rucker has nice trousers. “Trousers are going to happen,” she said. She also likes the look of blouses with trousers or jeans.

DeeDee Shaw, partner in Monkee’s, a 21-store chain based in Winston-Salem, N.C., said, “We’ve had a good show. We like Hunter Bell. We liked Alice + Olivia, and Ted Baker looked great. We’re from the South and we love color.” Justine King of Monkee’s also pointed to Bell’s black coat with a peplum.

Aynsleigh Pollarine, store manager at Frey Boutique, a 3,600-square-foot specialty store in Exton, Pa., said, “We’ve been finding a lot of metallic details and crocheted pieces.” She liked lines such as Erin Fetherston and Jill Stuart. “There are a lot of casual lines that had little flecks of details, like Jill Stuart,” she said. Patricia Holloway, president of Frey, added that Catherine Malandrino had “gorgeous cut-out leather pieces.” She’s also seeing a big focus on leathers and fur vests. The buyers also saw a lot of florals for fall, which are paired with fur vests to make it more of a fall statement. Among the jeans lines they liked were AG, Mother and Citizens of Humanity.

Holly Green, who owns Infinity, which has five specialty stores in New York, Cedarhurst, Great Neck and Scarsdale, N.Y.,  and Livingston, N.J., said she was buying knits from Autumn Cashmere. “They looked amazing. The sweaters are like sweatshirts.” She also liked the collections from Evil and Minnie Rose. She was also buying silky jeans with zippers on the side from Etienne Marcel, printed T-shirts from Chaser and liked the basics and fashion looks from Sweet Romeo. “Shae looks good, too,” she said. “They have great sweaters for the price.”

Vendors were pleased with the pace of business. Mark Stevens, director of Shae, was finding success with the brand’s moto-inspired knits, oversize knits, felted washed cashmere and sweaters with stitch interest and pop accents. Its knitwear wholesales from $70 to $180, and the line is carried by such stores as Intermix, Scoop and Shopbop.

Jocelyn Gordon, owner of Jocelyn, a fur accessories and outerwear firm, said: “Business is great.” She said she sells to such stores as Shopbop, Intermix, Bergdorf Goodman, Singer 22, Neiman Marcus and Saks Fifth Avenue. “I’m known for my infinity scarves, textures and patterns,” said Gordon. She said her fingerless mittens were wholesaling for $26, her infinity scarf wholesales for $96 and her coats wholesale for $600. “It’s the best year ever for furs. They’re young, contemporary, fun, easy pieces,” she added.

Courtney Moss, owner of Glamourpuss, has expanded her four-year-old business from fur accessories to shearlings, down jackets and coats. The company produces everything in China. “It’s been a good show for us. We saw Neiman Marcus and Bergdorf Goodman and a lot of new boutiques here and in Canada. We also have a Japanese distributor and are selling at Galleria in South Korea,” said Moss.

Allen B. Schwartz, owner of the company bearing his name, was showing Blue Pearl and A.B.S. at the show. Blue Pearl “is all about the sweatshirt and the luxe jogger,” said Schwartz. He said he’s doing well with a variety of styles, including those with leather trims, metallics, moto leggings and sweatshirts. “The biggest single item is the bomber athletic varsity jacket,” said Schwartz. Blue Pearl sells to such stores as Barneys New York, Fred Segal and Magnolia.  In the A.B.S. line, he was doing well with dresses with fringe, illusion on the sleeves, metallics and camouflage fun furs.

Hunter Bell, who won NBC’s “Fashion Star” last year, was also having a busy show. “The business is still growing and we opened up several new accounts,” she said. “We’re shipping early, fitting [well] and retailing,” she said. Among the bestsellers was a jumpsuit with cutouts. She said textures and digital prints have been very well received. Among the stores she sells to are Shopbop, Revolve.com, Nordstrom, Monkee’s and Soho Boutique in Cincinnati.