Hailing from France, Italy and Southern California, the men's and women's brands stood out at the expo with strong designs that blend quality and sharp prices. 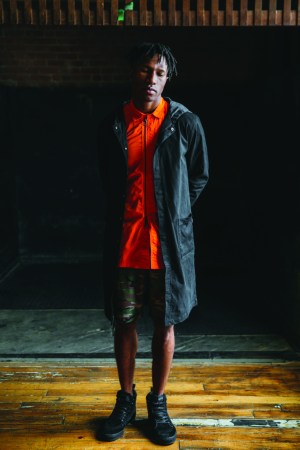 In its semiannual expo at Long Beach, Calif., the Agenda Show still has a firm grip on surf and skate markets since the event is held not too far from the headquarters of many action sports brands. At the two-day show, which ended June 30, a few emerging brands in men’s streetwear and women’s young contemporary stood out. Hailing from France, Italy and southern California, Project X Paris, Animapop, Fairplay and Michelle by Comune have mastered the formula of mixing strong design with good quality and sharp prices, often facilitated by the decision to do vertical manufacturing.

Brand: Project X Paris
Debut season: Fall 2016 in the U.S.; 2013 in France
Retail prices: $39 to $250
Retailers: Laboutiqueofficielle.com, Görgens Group in Germany and Footasylum in the U.K.
Background: Project X Paris has found an effective formula that helped it grow sales from $413,000 posted in its first season in 2013 to more than $11.1 million expected this year. Besides adapting the factories in China, France and Turkey that have made textiles for the founders’ family into sewing operations, it hired a French design team consisting of photographers and graduates of Central Saint Martins’ fashion program, who are all under 30 years old. The result is street-inspired sportswear that exudes enough polish and novelty without emptying a customer’s bank account. For instance, $230 buys a fall ensemble comprising a rust-colored ribbed polyester-rayon sweater with thumbholes, black-and-white cotton-polyester plaid button-up with raw edges on the collar and sleeves, acid-wash skinny jeans and tan velour-patched boots. The priciest piece is a $250 olive green cotton parka cut with a high-low hem and lined with rabbit fur.

“The quality of our product is insane for the price,” cofounder Jimmy Gov said. “If you find it in another brand, it would be twice the cost.”

Accelerating its momentum in Europe, the Paris-based company opened its first retail flagship in its hometown on the storied Rue de Rivoli on June 17. Gov said he hopes to launch a store in New York within two years and segue into the women’s business within three. Throughout, the designers plan to stick with a neutral palette that complements the layered aesthetic, which works for men such as Gov as well as for his sexagenarian father. “If you’re trying to go too forward and get fancy colors, only the fancy guys would wear it,” he said. “We’re trying to get everyone.”

Brand: Animapop
Debut season: 2016 in the U.S.; 2012 in Italy
Retail prices: $169 to $220
Retailers: 45 U.S. specialty stores, including Flicka in Poulsbo, Wash., and Sheridan in Del Mar, Calif.
Background: Animapop translates Neoprene from the surf to the streets with reversible designs and colorful art. Made in Italy, the dresses, skirts and jackets are cut by laser from light, thin Neoprene that has been printed on both sides with bold images created by an artist in the U.K. Appealing primarily to travelers, the brand offers a matching bag for each style to ensure easy packing. The classic silhouettes and details — including sheaths, A-line skirts and cap sleeves — balance out the in-your-face colors. Some styles, like a high-waisted skirt attached to a billowing polyester blouse as well as a car coat covered with black velvet on one side, could work for the office. First year sales for the American market are expected to hit $250,000, said Tricia Carll, who handles national sales for Animapop. “It’s easy to care,” she said, adding that customers like the value of buying “a dress under $200 and it’s two dresses in one.”

Brand: Michelle by Comune
Debut season: Fall 2015
Retail prices: $18 to $94
Retailers: Urban Outfitters, Bloomingdale’s and Nordstrom
Background: The year-old offshoot of the men’s brand Comune isn’t shy about identifying its target customer. “We really put our focus on the Millennial girl,” said Mitch Jenner, vice president of sales at the Los Angeles-based company. Described by him as “a savvy girl,” this shopper searches for quality at the right price. Hence, Michelle by Comune’s most expensive item is Made in L.A. denim retailing for $128. T-shirts start at $18 and knits run from $42 for ribbed sweaters in a salt-and-pepper mélange to $94 for a wool-blend sweater coat. It manages to keep prices competitive by spinning knits in its own mill in California and sewing the pieces in three factories in Mexico. The brand also avoids following trends too closely. “We’re about product they can wear and it’ll never go out of style,” Jenner said.

Brand: Fairplay
Debut season: Fall 2014
Retail prices: $24 to $120
Retailers: Juice in Taiwan, Azalea in San Francisco, Wish Atlanta in Atlanta, Ga., and Zumiez
Background: Fairplay is moving into the women’s market this fall with $66 jogger pants that are woven out of a cotton-Spandex blend in vibrant colors and that uphold its brand ethos. That is, “contemporary design at a high execution with a competitive price point,” said Jeff Scott, Fairplay’s brand director, who cut his teeth in the fashion industry as a buyer at Urban Outfitters, Tilly’s and Washington-based Rue 14. To keep prices competitive, the Huntington Beach, Calif.-based company is willing to take a hit on its profit margins and make up the difference in sales volume. Retailing from $24 to $120, the collection for next spring follows the military motif from fall with a post-war aesthetic influenced by distressing, stonewashing and patches. For its first sneaker launching in February, it collaborated with Brooks Running’s Heritage Collection on a black suede style that takes aesthetic cues from UFOs. “We’re trying an angle that people don’t consider,” Scott said.