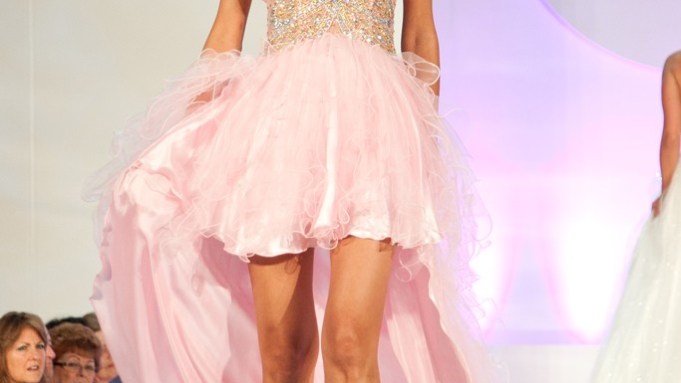 ATLANTA — Prom dresses for 2014 range from cute and sweet to sexy and glamorous, giving young women a wide choice to express their individuality, according to retailers and resources at the Atlanta Apparel Market held at AmericasMart Thursday to Monday.

Non-prom buyers focused on resort and/or early spring. Michelle Denson, buyer for Simply Natural in Naples, Fla., bought resort for delivery at the end of November and beyond, while Carolyn Redfield, owner of Pineapples in Vero Beach, Fla., picked up trends for early spring, including black and white and geometrics.

The prom and social occasion business for AmericasMart, resources and retailers has grown substantially. Both Sherri Hill and Tony Bowls said their brands are showing strong increases, and Lori Kisner, senior vice president of apparel for AmericasMart, said the mart’s social occasion category, including prom, has grown by more than 70 percent from a year ago, including 49,000 square feet of new showrooms. Kaye Davis, executive director of fashion for AmericasMart, said the show now attracts retailers from all over the U.S., the Caribbean, Canada and from as far away as Kuwait.

The mart added The Collective, a 4,000-square-foot temporary space for prom and social occasion and accessories. Michelle Harrison, consultant to AmericasMart who helped set up The Collective, called it “a one-stop shop.” The 34 resources offered included Roxcii, a small Australian fashion house breaking into the U.S. market; San Francisco-based Siri; Shail K., and Badgley Mischka.

Color trends for sophisticated dresses are rich jewel tones in reds, greens, purple and blues, while the sweeter prom dresses are mint green, pink and coral. Black, gray, white-ivory and aqua are important, as are neons. Styles in long dresses include mermaid, Empire cut, pleated skirts and ballgown, while short dresses are midthigh and primarily have puffy tulle skirts.

Both he and Hill turned to the past for inspiration for 2014. Hill said she looked back to Fifties movie stars, especially Audrey Hepburn, while Bowls was more inspired by Eighties television shows like “Dynasty,” as well as by Madonna. Hill also introduced a new line in collaboration with Sadie Robertson, the 16-year-old star of “Duck Dynasty.” The line reflects more modest looks in prom.

Joey Rutherford, owner of The Competitive Edge in Dothan, Ala., said he booked Hill’s new line, as well as other styles, adding, “Sherri Hill is the biggest seller in our store.” He also bought Jovani and Mac Duggal. Because Rutherford’s sales increased 20 percent last year, he is buying as much as 20 percent more for next year.

White said the company just opened a separate prom store. Bridal and prom had previously been in the same store.

In other retail, Simply Natural’s Denson bought dresses, jeans, tops and skirts, and also sought to fill a void for jewelry priced between high- and low-end in the Naples area. She booked DL1961 jeans, Joe’s Jeans, Green Dragon, Pink Lotus, Michael Stars, Susana Monaco, Bailey 44, Autumn Cashmere and Wilt. With sales up nearly 30 percent this year and last, Denson said she is buying more for 2014. “The economy is better, and a lot of companies are moving to Naples,” she said.

Terri Jackson, owner of Just the Thing with one store each in Columbia, S.C., and Atlanta, was filling in on current trends: apparel with leather trim, animal prints and shorts for fall in leather and velvet. She also bought dresses, pants, tops and sweaters for resort in bright colors, as well as black, red and white together. She touched on spring dresses and sportswear with Tracy Negoshian, Annie Griffin and Amanda Uprichard.

Her business is good for the year, but dropped off this summer because of the cool, wet weather. As a result, her sales are about even with 2012.