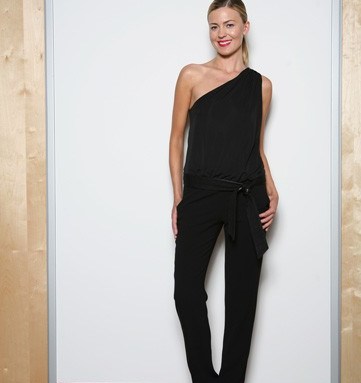 Allen Schwartz, founder and designer of contemporary label A.B.S., is branching into the missy market with licensing partner P2F Holdings. The new line, Essentials by A.B.S., will debut in Dillard’s and Nordstrom.com this fall.

“We’re spending a lot of money at a time when people are just trying to get by, because we think it will pay off,” said Sandra Piontak, chief executive officer of P2F, based in Seal Beach, Calif.

Retail price points for the 180-piece collection range from $65 to $139, with most dresses and jackets priced around $99.

The line consists of fashion-forward blouses, skirts and jackets, which go from office to cocktail, and a variety of dresses in bold colors and prints. The fully lined pieces feature details such as pockets, pin tucks, ruching and draping, which are normally available only in contemporary lines. There are trend-right pieces such as the boyfriend jacket, a printed poly-chiffon halter top with a bow neck, a draped split-front skirt, side-zip leggings and a one-shouldered jumpsuit.

“It’s a whole new category and partnership for us,” said Schwartz, based in Los Angeles, who last month signed a lingerie deal with Vandale Industries Inc. “I’ve been doing a lot of licensing, and this was a natural for a new category….It’s going to be great to bring the A.B.S. culture to the missy customer, especially at what we consider the opening price point. There is a customer out there for it, especially today, with the looks trailing down from designer that are really sophisticated and updated.”

Commenting on his decision to license the brand to P2F rather than produce it in-house, Schwartz said, “I concentrate on the contemporary market and don’t want any overlap or mix of cultures. I will still be able to bring the trends to the table with the licensee.”

For P2F’s Sandra Piontak, the partnership was a chance for the company, which has dealt mainly with private label lines for young men’s streetwear and premium denim, to make a play in the women’s market.

“We saw a tremendous void for style and excitement in the missy market,” she said. “We’ve wanted to bring great design and great value to the market even before the economic crisis evolved to this degree.”

Lopez and her team make samples not only in size 4 but also in size 10 to assure that the styles work on women of all sizes.

“Because this is something new on the floor, people are going to be out of their comfort zone, so being associated with a name like A.B.S. helps tremendously,” Piontak said. “Allen is Mr. Hollywood, and he brings that style to the table.”

Piontak said Dillard’s picked up the line for all its stores, and Nordstrom has ordered some exclusive pieces for next season. First-year sales were estimated at $6 million to $8 million.