In Celebration of Moms

Donna Karan and Susan Sarandon were among honorees at this year's Outstanding Mother Awards. 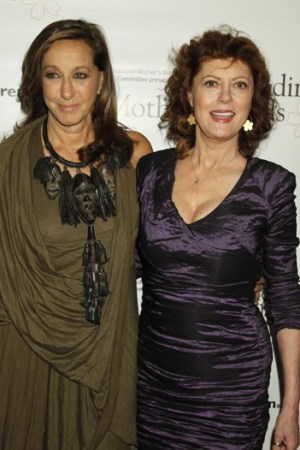 NEW YORK — Five high-powered women who successfully balance their careers with the demands of motherhood were honored Thursday at the 33rd Outstanding Mother Awards at the Pierre Hotel.

Donna Karan; Susan Sarandon; Sen. Kirsten Gillibrand (D., N.Y.); Cindi Leive, editor in chief of Glamour, and Joyce Armeli, senior vice president and general merchandise manger of The Bon-Ton Stores Inc., were recognized at the luncheon. Gillibrand was unable to attend because she was invited by President Barack Obama to attend the Ground Zero ceremony.

Mindy Grossman, chief executive officer of HSN Inc. and a 2010 Outstanding Mother, served as mistress of ceremonies. Dressed in a leopard print Yves Saint Laurent dress, Grossman wore the identical dress as Laurie Dowley, chairman of the National Mother’s Day Committee, who had to introduce her on stage. Both women took it in stride.

“We’re wearing it completely differently,” said Grossman, who accessorized hers with a wide red belt and red shoes. “When I walked in, I looked right at her and just cracked up. There are bigger things to worry about in the world,” she said.

In accepting her award, Karan spoke about how she never expected to be a working mother, but after giving birth to her daughter Gabby, her boss, Anne Klein, was in a hospital dying of cancer, and Karan had to give up her plans to take a leave of absence and get back to work. Karan thanked her family, many of whom were in the audience, as well as her work family, which she mistakenly referred to as her “Anne Klein” family. “I mean Donna Karan,” she said. “Freudian slip.”

Karan, who plans to spend Mother’s Day in Haiti, spoke about her philanthropic endeavors and how fortunate she is to be able to combine her creativity with philanthropy and commerce.

Sarandon, actress, activist and mother of three children, said she was happy the event benefited Save the Children. “It all starts with kids and education. It’s much harder later to make a difference.” After being told she couldn’t have children, and then having three in quick succession (“I’m the patron saint of old ovaries”), she said she spent a lot of time with her kids and took them with her when she traveled. “You have to forgive yourself pretty early on for the permission slips that are late, and the lunch boxes that are forgotten,” she said.

Leive, dressed in a Donna Karan dress, said she didn’t know why she was receiving an “outstanding mother” award. “At the end of most days, I’ll settle for still standing,” she said. Leive said she wouldn’t be able to do everything she does without the support of her husband, Howard.

Armeli said that after she was married, she was always waiting for that “aha” moment to signal when to start a family. “The ‘aha’ moment came when I was married five years and my husband said, ‘If you’re going to be doing all that traveling, I need a buddy to hang out with.’ That was my ‘aha’ moment.” She gave birth to Joey, and then Angela, who are now both in their 20s.