Ann Taylor is sharpening its look and aiming to be relevant to a broader spectrum. 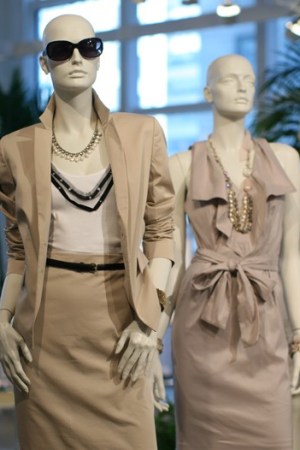 NEW YORK — Ann Taylor is sharpening its look and aiming to be relevant to a broader spectrum.

“We have been spending a lot of time on improving the fit, like highlighting the waist with a bit of ruching that flatters the curves without exposing them,” Lisa Axelson, senior vice president of design, said during a preview of the summer 2010 collection at Ann Taylor’s Times Square headquarters. “That’s what it’s all about — modernizing this amazing brand. The target audience is still the working woman. We don’t focus on an age, but it is exciting to see a new generation that’s coming to Ann Taylor.”

During the last several seasons, Ann Taylor has gone through upheavals from downsizings to executive turnovers. Business has been up and down, but there’s a renewed effort at overhauling the merchandise and polishing the image.

For summer, there are three main deliveries, with the May group marked by a “Charleston-chic” mood: lace, sorbet colors, vintage-inspired jewelry, crisp white shirts, cotton crepe shifts, pencil skirts, wrap trench dresses and slimmer silhouettes pinched at the waist. June is inspired by Paul Gauguin with rich colors and abstract patterns, particularly in cardigans, as well as shorts paired with cardigans for a chic, sophisticated urban look, reworked leopard prints and work-oriented pieces relaxed enough for going out at night.

“The versatility of the wardrobe is essential,” Axelson said.

Through the season, there are lots of cardigans showing more colors than previously, an emphasis on texture such as gauze, and jewelry with a mix of semiprecious stones. Novelty knits, embellished tanks and white tops are also important, as are updated proportions and silhouettes that appear new to Ann Taylor, such as dolman sleeves, funnel necks and cropped lengths.