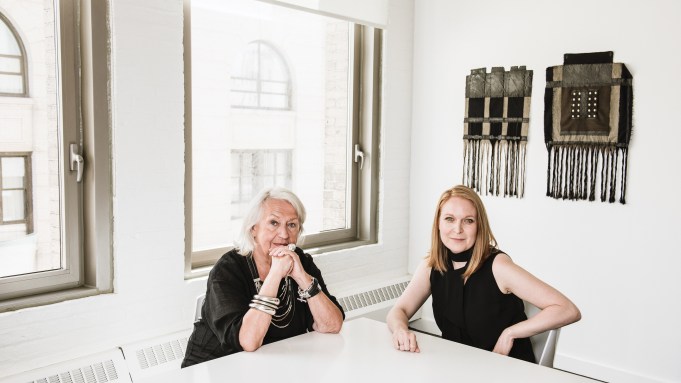 Chief creative officer Barbara Gast and creative director Emily Smith have spent a collective 34 years designing for Lafayette 148. In the 20 years since the label launched, there have been significant changes in the market formerly known as bridge, and Gast and Smith have navigated the tides with savvy. It’s tricky to balance the needs and limits of a fiercely loyal customer with the whims of fashion, measuring how to push enough to keep up but never too much.

“We both joined the company when there was a shifting of the market — the positioning [of Lafayette 148] in the past was very much bridge,” said Gast. “We saw the possibility of changing and evolving the collection. We have the passion of finding new solutions, new finishings, new proportions and getting deeper into the quality of the product.”

Much of the production shift was made possible by Lafayette 148’s state-of-the-art factory in Shantou, China, which Gast refers to as their design “kitchen,” and to which she and Smith travel several times a year.

The Lafayette 148 look is conservative but current, known for fits and luxurious fabrics if not necessarily for its daring. That’s not what the customer wants. “We like to say we dress a businesswoman — but what is the business woman doing?” said Smith. “She’s traveling. She’s running around. What does she need in her wardrobe? She’s modern, whether she’s 35 or 65 — they all want the same thing. Luxury casualwear. It’s based more on personality than age.”

Though the label is named for its original address in SoHo, a building it still occupies, it was the emphasis on China — there are 13 Lafayette 148 stores there — that opened Gast and Smith’s eyes to how the brand could modernize. “We started to change the audience for the China market because it was very clear that the age group was younger,” said Gast. “The consumer in China is a 35- to 40-year-old businesswoman who has money. Our previous customer in China would never buy anything because she was staying home with the kids, with her grandkids. That is a big generation changing in China.”

Gast and Smith elevated the collection, working in better fabrics and modernized cuts for the Chinese customer, and saw it resonated in a big way with the American consumer. “They suddenly saw us differently,” said Smith.

They upgraded fabrics — cashmere and silks — and focused on interpreting global trends and key runway trends in a delicate way. “We had to pay attention to details so she wasn’t shocked or couldn’t recognize the label,” said Gast.

Lafayette 148’s mainstays are jackets — important for lawyers and Wall Street women, said Gast. They also do a big shirt and pants business, always have. For the 20th anniversary, they’re revamping pieces from the label’s early days. The foundations were still solid, but they needed some tweaks. “It’s like a Mercedes,” said Gast. “You redesign it every five years, but you update it every season. You change it in a way that nobody says ‘Oh my God, it’s totally different.’”

Gast stressed how crucial a core customer is. “If you have good pieces, you love them, they become like your blanket. You want to keep them because they’re good and that creates loyalty. If it’s fast, fresh and new, you are loyal to the moment, you are loyal to the price point, but you are not loyal really to a brand. That’s most important for us.”